You are here: Home / Archives for Capers

[dropcap style=”font-size: 60px; color: #0B0B61;”] H owdy folks – I was going to go picking blackberries and sweet chestnuts this weekend. Going out on Sunday I was rather dismayed to see that both places I’d planned on going for my gathering activities were literally chock-full of people. They were either out enjoying the wonderful weather or they had the same idea of gathering as I did. Regardless, they were, unfortunately, there first, so I went on my merry way.

So, what did I do this weekend? Well, I tried my first proper set of time-lapse photography. As I don’t have an intervalometer to hook up to my camera I drove down to a nearby lake, hooked up my laptop to my camera and set it to take photos every 10 seconds. The result is … ok. Not something worth showing to anyone, but I can share with you one of the stills, taken just as the sun is about to set. When you have a several hundred photos it’s incredible to see just how much the sun moves, even in 10 seconds

As for the “adventure” – well, I was in a bit of a quandary. I wanted to post some sort of “adventure” related photos, but don’t really have any. So, I decided that for situations such as these I might as well post a few photos I’ve taken in the past of various places which may (or may not :D) be interesting, so I’ll start off with Parc de Bagatelle, just outside Paris (sorry, no English Wikipedia link available). I used to rent a (very, very) small studio apartment down the road from this lovely park when I was a student. It wasn’t until I’d been living there quite some time that I discovered it for the first time. It’s next to the “Bois de Boulogne” and has a small “château” inside but that’s far from the main attraction, which is of course the large, beautiful gardens. Lakes, large rock formations with waterfalls and a belvedere – a large hill with a spiral path going to the top. From the top you can see the park and also notice that even though you’re surrounded by peacefulness and tranquility the bustle of the city is not far away. The park also has quite a large number of peacocks and peahens strutting around. I find the sound of peacocks very mournful – reminds me of childhood trips to a large country park – unfortunately it seems quite rare that the birds want to play along and put their feathers up, and of course when they do there is a flurry of attention from visitors, making it impossible to get any good photos! In these cases I was lucky to find a couple just resting in, and eating the grass. Armed with my zoom lens I was able to capture one of them just as he was trying to swallow a blade of grass the wrong way! The park has a wonderful restaurant – I was lucky enough to go there recently for a brunch. It’s a very popular location for weddings and receptions so naturally they adapt their prices to match their popularity, but in the summer I can imagine it would make a lovely dinner location so you should definitely try and check this place out if you’re in the area! Behind the restaurant they have a building which is built to look like a small cottage – I’m not sure if it was ever used for anything in particular, but next to this there is a small “potager”, or kitchen garden. As per my last post the food grown here seems to mould away in the fall, but in the spring and summer it looks beautiful with many different fruits and vegetables being grown here. Past this they have a small set of steps into a hedged area which contains an oft-overlooked, but beautiful orchid garden. It’s nice to sit on one of the benches here and while away a few hours with a book or just sit and think!

So that’s the Parc de Bagatelle! Keep a look out for a little pathway carved through some rock which leads round to a seat behind a waterfall! I hope you liked the photos and I’ll try and have something more “fresh” for you next time! In case anyone wanted to download full size versions of any of these photos you can do so from my Downloads page. Now on to the recipe! Brik (pronounced “Breek”) are a Tunisian dish consisting of what is essentially “something”, wrapped in pastry. There are about as many different fillings as there are ways to fold the pastry, although the most common folding methods are either “small package”, “cigar shap” or “triangle”. You can make them sweet or savoury and they’re usually deep-fried, although you can shallow-fry them if you’re a bit nervous.

I’m making the recipe which my wife introduced me to here because, in my mind, it’s the best. I’ve had a few other types but this one has the ideal flavour in my mind. If you make these, be sure to leave at least one to try cold the next day. It might not sound tasty – especially since these are so delicious when they’re crispy and hot – but the next day, when cool, sure… they’re “soggy”, but they’re SO good! Enjoy 🙂 [dropcap style=”font-size: 60px; color: #8A0808;”] N ow who doesn’t love a good pizza? Crisp bread base, rich tomto sauce, stringy, hot, delicious cheese and about any toppings you could possibly ever desire! While Italians everywhere are probably heaving a deep, heavy sigh at this, I do enjoy trying “localised” versions of pizzas. In Sweden the “kebab pizza” is very common – pretty much a margherita pizza topped with lettuce, kebab meat, onions and chillies and kebab sauce, served with a healthy pile of tart, refreshing Pizza Salad (please excuse the horrifically bad photos!). In Japan they seem to go in for potato, sweetcorn and seafood on their pizza while in France they seem to love Crème Fraiche on their pizzas. Dominos makes a pretty darn good called a “Savoyard”. Cream cheese instead of tomato on the base, mozzarella and reblochon cheese, lardons and potatoes. Not for everyone but it’s pretty enjoyable if you pretend it’s not supposed to be a “pizza”. They seem rather similar to the Tarte Flambée in fact:

Tarte flambée is an Alsatian dish composed of bread dough rolled out very thin in the shape of a rectangle (traditionally) or circle, which is covered with fromage blanc or crème fraîche, thinly sliced onions and lardons. It is one of the most famous gastronomical specialties of the region.

In any case, I’ve had a pizza stone sitting in my cupboard for some months – a gift from a friend – and I thought it was really high time I started using it so here we go. A post all about pizza! I thought I’d do it in multiple sections – the base first, then the sauce, and finally the pizza construction itself, because different sections may be useful to different people. Additionally – some words of advice in using the pizza stone – make sure you read how to handle/prepare it properly. You will always need to put it into the oven from cold, and heat it up with the oven. I also recommend getting a short handled peel because you seriously won’t want to be messing around with a billion degree piece of rock in your oven once it’s hot. Lastly, try and get some coarse ground flour – I used fine ground semolina flour. Even though it’s “fine ground” it’s still much coarser than regular flour and is perfect for dusting the board with when rolling out the dough. It provides the perfect surface for optimum “pick up” of the uncooked pizza from the surface using the peel. Click the sections below to see the various steps and photos! Have a good Thursday everyone 🙂 Anything you want… but, if you want to make one of my beloved “French specialty” pizzas with crème fraiche and so forth…:

I was never the world’s biggest fan of fennel, until I tried roasting it like this – the taste of fennel is much milder than usual and it goes excellently with the lemon juice and salt. Mackerel is quite strong in flavour so if you’re not a fan feel free to substitute with something like pollock or haddock which would also work really well.

If you’ve never tried potato salad with capers – try it, now! Swapping out most of the mayonnaise for yoghurt makes it much lighter and fresher (not to mention healthier). I like to strain my yoghurt through a coffee filter to remove as much of the whey as possible and make it really creamy. If you can restrain yourself, do make this the night before and let it rest in the refrigerator overnight. The flavours will infuse and develop and you’ll have an absolutely fantastic salad the next day!

I hate to brag as well (who am I kidding, I love to brag about this potato salad) but I never met anyone who didn’t absolutely love it, and it’s one of my most requested dishes whenever we’re invited to parties, picnics, and the like.

Author’s note: this post has been revised since the original posting. I’ve tweaked the recipe a little and added a new (and so much better) photo of the final product (here is the original photo – yuck!). I hope it will inspire you to try it! 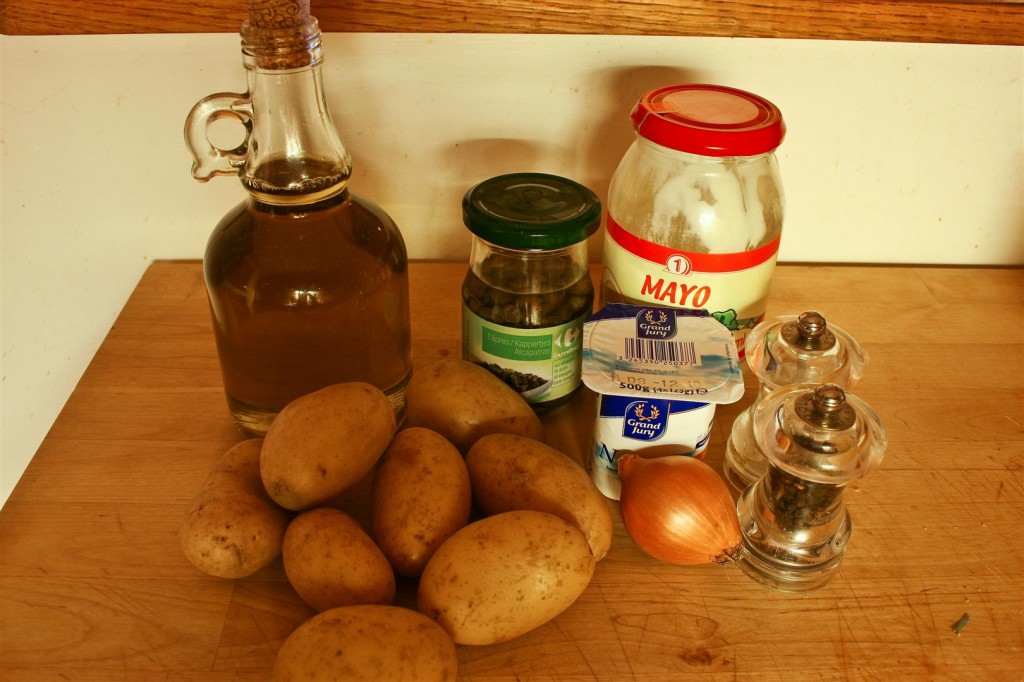 Tartar sauce goes really well with deep-fried seafood, providing a slightly tangy taste to cut through the oil and this simple recipe can be prepared in just a few minutes.

– 2 individual pots of Natural Yoghurt
– 3 tbsps Mayonnaise
– 2 or 3 small pickled cucumbers/gherkins (the type which are about 6cms long – if not, using about 8-10 or so of the small “cornichon” style ones)
– 1 tbsp Capers
– Salt
– Pepper