You are here: Home / Archives for Cauliflower

Hi again everyone. I’ll be continuing on in a similar theme from my last post with another frugal meal and this one has the added benefits of being absolutely stacked with veg and other delicious, filling, healthy things like lentils. The dish is, as you can tell by the title, a shepherdless, or meat-free, pie. It’s completely vegetarian, and even suitable for vegans if you omit the butter and milk from the mash. What’s more, the carbohydrate content of the pie has been slashed because we’re not using the traditional potato as a topping. No sir, we’re piling on a great mound of cauliflower mash which is about a billion times healthier than the spud equivalent (well, maybe not a billion, but it’s low carb and low calorie)!

The “meat” of the pie is a generous dose of lentils and one of my current favourite ingredients – cabbage! I find this much maligned vegetable absolutely delicious. Shredded cabbage fried up with some minced beef, topped with a bit of spicy ketchup… I know, I know… it sounds like student food, and it’s hardly a gourmet creation but damn if it isn’t satisfying, delicious comfort food!

I find that cauliflower, lentils and cabbage just as they are run a risk of being a bit bland so I wanted to spice them up a bit. I opted for my usual beloved go-to spice – cumin – with some cayenne pepper, but many combinations of herbs or spices would work as well. Given that it’s Autumn I guess you could even throw in some pumpkin or squash – I’ll pass on that though. I’ve never been the biggest fan personally, even though the rest of the world seems to go nuts for it around this time of year! 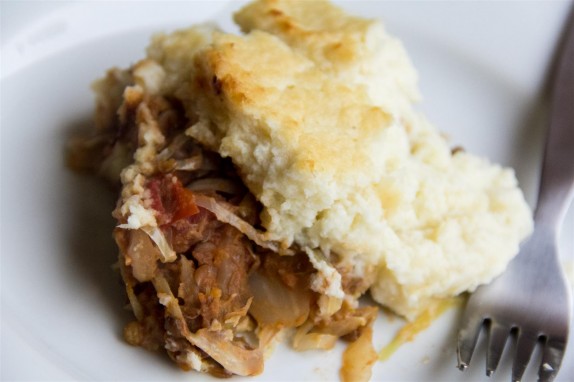 It suddenly hit me recently as well that in a very short period of time FiveEuroFood.com is going to be two years old! I’m not quite sure what to do to celebrate so I thought I’d hand it over to you. I’m going to cook something up, but you get to decide the ingredients! I’d love it if you sent in some ideas for five ingredients in the box below. I will pick an entry at random and think up a dish and cook it all up, on video to boot, and post it all on my 2 year “blogiversary”. I might need to employ my wife as “camera woman”, but more people in my little kitchen can only mean more fun, right? I’ll even name the dish after the winner! Please submit your five ingredient ideas in the submission form below (in the collapsible box) and let the fun commence!

This is now finished – thanks for your submission!

Have a great day everyone – enjoy the rest of the post, I’m looking forward to seeing what ideas you come up with for me to go out and buy. See you back in a few days! 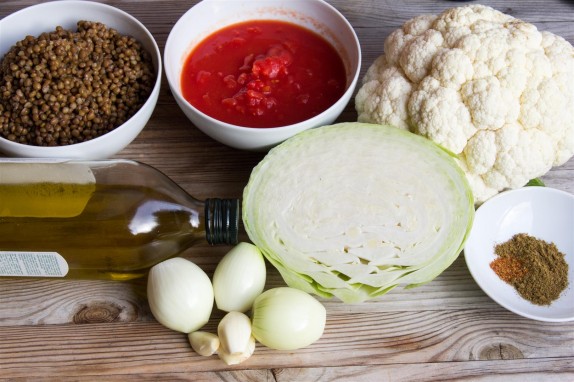 This post could have run under many names – “chickpea salad” being perhaps the most boring of them. I’ve never made a deconstructed anything in my life… I’m not even quite sure what the term means in the culinary world… but it does seem strangely apt for this dish, so I went with it. I have raved before about my undying love for hummus… It may sound odd but this stuff is probably my favourite food and while there are a multitude of worse things (for the health I mean) I could love to eat in the world – cookies, ice-cream, chocolate (hell, I love those too, but not quite so much!) – despite what many people think, hummus isn’t that healthy, at least not if it’s made well, and by well I mean “well lubricated with plenty of olive oil). Not only is there no small amount which is poured in during preparation, but it’s even traditionally served streaked through with liberal dashes of the stuff as well!

I know, I know – olive oil isn’t so terrible, and chickpeas are great, but it’s still fat and if you’re trying to drop a few kilos you don’t want to be getting too cozy with that beloved bottle. Well, that’s a bit of a problem for this ol’ hummus lover here. I could  make a “healthier” version, you know, with less oil or something, but that’s not very exciting, is it? Besides, there must be thousands of hummus recipes on the internet, and everyone has their own way of making it, so I thought I’d aim for something a little more interesting.

I should actually credit the idea for this to my wife. She put the idea in my head and I thought about it a bit and decided just what a great idea it was… good wifey; not just a pretty face! So, think about what you normally eat hummus with; sure, some people are crazy and stick it on ice-cream, but most people would probably eat it with bread, crudités, maybe in a sandwich, right? So how about sticking all the ingredients for hummus into a bowl, adding the afore mentioned crudités and significantly less oil and stirring it all up? 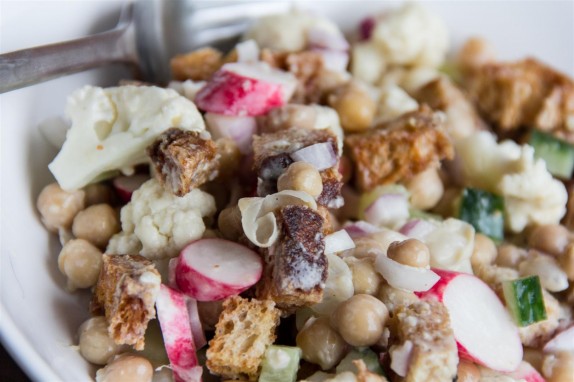 The result is a delicious chickpea salad with a wonderful, rich “hummus-like” flavour, thanks to the lemon juice and tahini paste. It has the filling, nourishing, satisfying effect from the chickpeas, and the wonderful crunch from the vegetables. If you love hummus and want to try something a bit different, give this a go. It’s fast and easy to make and the good thing is, like hummus, you can make a big batch, and come back to it over the next couple of days and dip in for a lunch or a snack every so often. One note: if you add bread, you might want to keep this separate unless you’re eating the whole lot immediately as it will go soft in the tahini dressing and the lack of the crunch from the bread does detract a little from the final eating experience! Enjoy everyone – I hope you enjoy today’s video as well! Have a great Monday and I’ll be back on Thursday with something new! 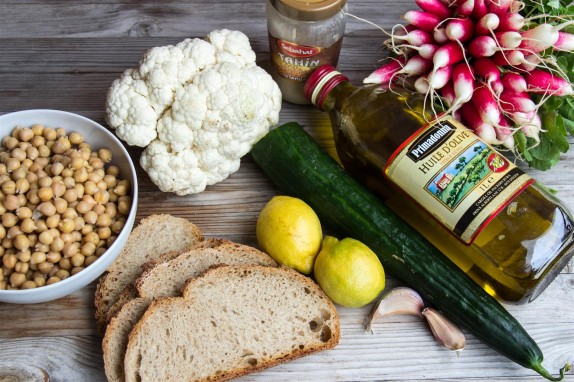 Hi everyone – please forgive my tardiness in updating – as you may know, I’ve had family over, and indeed still do. I thought I had things well under control but it would appear that I was caught rather off-guard and didn’t really have my “ducks in a row”, so to speak. Normal programming will hopefully resume by the weekend, but I don’t like to suddenly let my site “go dark”, so in the meantime I thought I should try and get this recipe out as it’s something which worked out rather well. and is well worth a try. The photography was still done on my old camera before you wonder :).

I have Eva from KitchenInspirations to thank for the inspiration for part of this dish. Way back last year, when I first started following her blog, one of the initial recipes I encountered on her site was for a fantastic alternative to mashed potato – mashed cauliflower and celeriac! I have to admit – I’m not a fan of cauliflower. I’m sure I’ve spewed a vitriolic diatribe against the revolting vegetable at some point in the past on this blog – it’s one of those things which just tastes funky. It’s ok in a soup, piccalilli, curry or pie, but on its own, as the “star” of a dish? Well… “no thank you”. (I should mention here that I adore it raw for some reason – it’s delicious!). 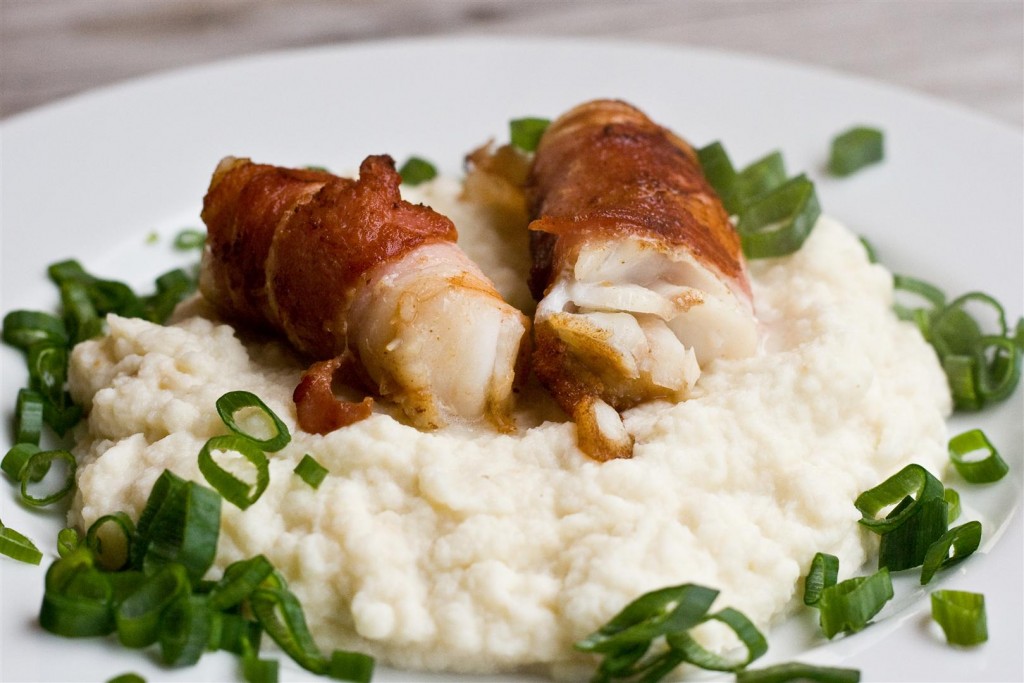 That said – I like to try everything at least once and a cauliflower mash has been on my “to-try list” ever since I saw Eva’s post. I gotta say – it was delicious – I was so impressed. The puréed cauliflower was rich, creamy and my wife even thought I’d added cheese to it! Not only this, but cauliflower has about a quarter the calories of potatoes which makes this a darn healthy mash (well, ok – it would have been until I piled in the butter!).

The bacon wrapped cod on top was delicious. Cod is nice, but let’s face it – it’s a white fish. It can be quite bland, so the bacon added a wonderful saltiness to the flavour, as well as making sure the fish didn’t get over-cooked. One recommendation – if you decide to give this a try, serve up some extra veg as well. Some chopped tomatoes maybe, or asparagus – something to bring a bit of variation and colour to the dish.

I’ll be back on the weekend I hope – have a good day everyone! 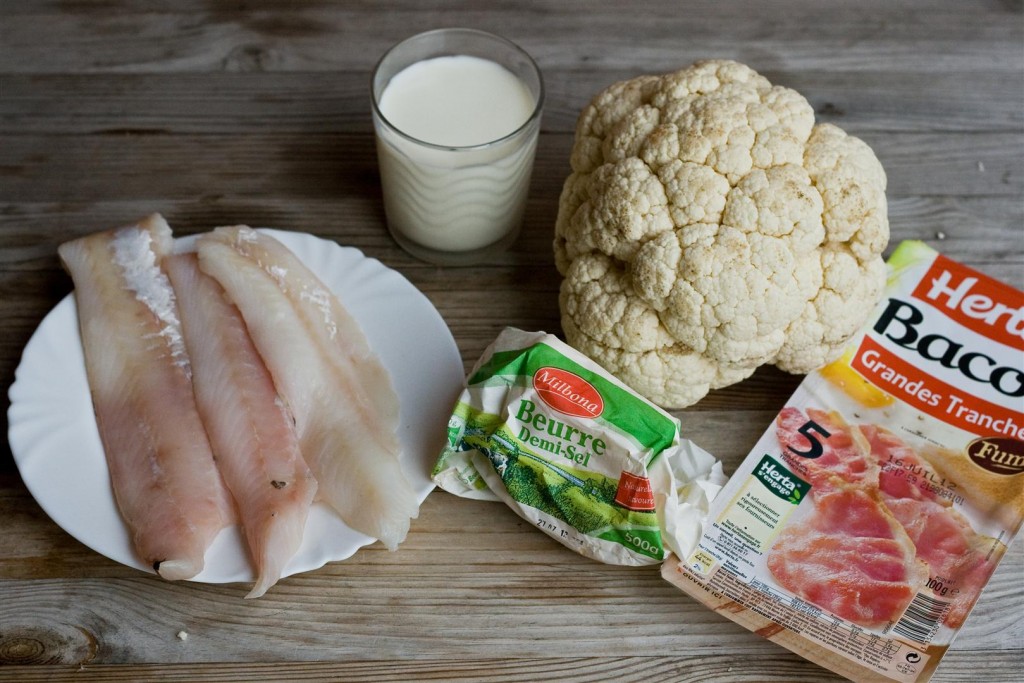 I’m not sure about you but I love the idea of canning and pickling. I have a vision of one day having a house, a big bright, airy kitchen, a garden which I can fill with vegetable and fruit seeds during the spring – harvesting them during the summer and doing all sorts of exciting things with them. I want a separate building which I can fill with jars – jams, marmalades, pickles. I want to be able to stock up for winter and maintain an inventory so I know just how many jars and bottles I have out there at any one time. Eventually I even want to have chest freezers and freeze things I have grown. All things in time though. For the moment I have to make do with the space and resources that I have available to me and one way of satisfying my conserving urges is through canning. I make a mean chutney but it was time to try something a little different.

I was talking with Sissi a while ago about mustard and she recommended I try something called “Savora”. A product similar to Mustard by the company Amora which features mustard, cinnamon,  cayenne pepper, nutmeg, turmeric, cloves, celery, garlic and tarragon. I was pleased to discover this and think I’ll probably be keeping this in the house from now on (thanks Sissi!) but I also immediately noticed that it was a lot like a smoothpiccalilli to me – a British take on Indian pickle (apparently). For those of you unfamiliar with it, it’s a deliciously tangy, spiced, crunchy collection of vegetables, cooked in vinegar commonly eaten with cold meats, cheese, bread, and so forth. If you want to know my idea of the world’s best sandwich it’s as follows: two slices of white bread, thinly spread with mayo, stick in some thinly-sliced strong cheddar, sliced cucumber, thinly-sliced ham, sandwich it all together with some piccalilli and baby, you got a party goin’ on in yo’ mouth! 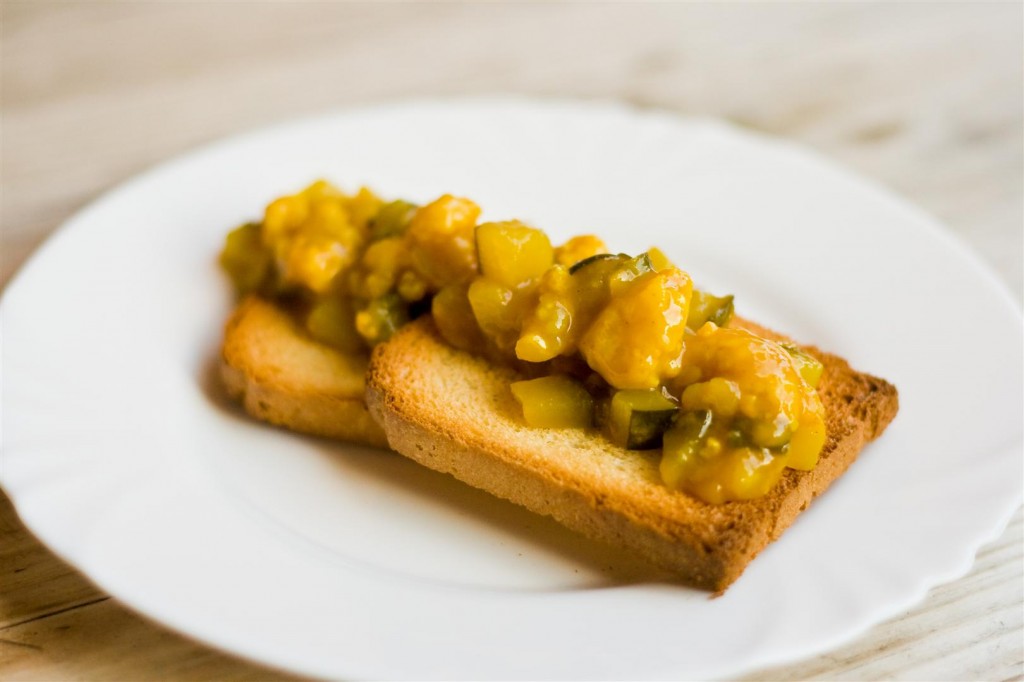 As with many things, quality of the raw materials plays a big role on the final outcome of the dish. The biggest tip I can give you is to use a good vinegar which isn’t too sharp in flavour. Additionally, make sure you don’t forget to brine the vegetables over night. This will ensure they retain flavour, crunch and bite after cooking in the vinegar.

If you have a garden and end up growing a whole load of veg like this (let’s face it – cauliflower is vile!… sorry, I grapple with it yearly and still can’t get on board with it fully!) this is the perfect use for it.

Have a wonderful Thursday everyone – I’ll be back on Sunday with another gluten-free post, as well as some photos of… well, you’ll have to wait and see. I have a family member visiting and we’ll be visiting a thing or two… some nice photo opportunities to be had! 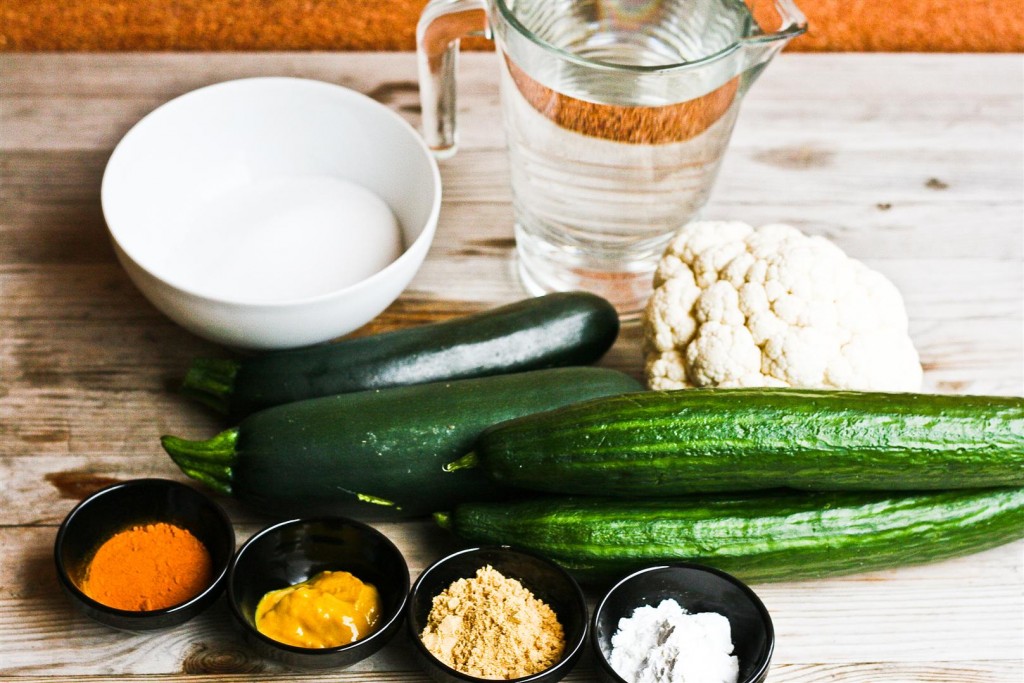