You are here: Home / Archives for Mustard Seeds

My earliest memory of piri piri was of a jar of the things my mother had in her kitchen. For some reason completely unknown to me she had a huge quantity of dried bird’s eye chillies – I think perhaps someone had given them to her as a gift – and as far I know, we never actually ate them. Such an ingredient wasn’t common in the dishes of my childhood, and since I didn’t really know the flavour I decided that the best thing to do would be to just try one. Except I wasn’t stupid.

No, actually I decided the best course of action would be to offer one to a friend of mine (who luckily had even less of an idea than I did about such things). He was dubious but I told him that it was “really good” and he just “has to try it”. His reaction after he’d taken a dozen chews told me pretty much everything I needed to know about piri piri back then, and it wasn’t until much more recently, now that my tastes have developed, and my chilli-tolerance has improved as an adult that I’ve tried to incorporate them into more dishes.

I love cooking whole fish – I haven’t quite plucked up the courage yet to get one which hasn’t been gutted and cleaned (though judging by the guides I’ve seen online it’s pretty easy) so will always get prepared fish, or – failing that – have the guy manning the fish stall at the local market do it for me with a few deft motions. Cooking fish like this is enormously satisfying. I don’t know whether it’s a throwback to a recessed caveman gene or something but preparing a whole trout for cooking feels so wholesome, so good, so… primal almost. 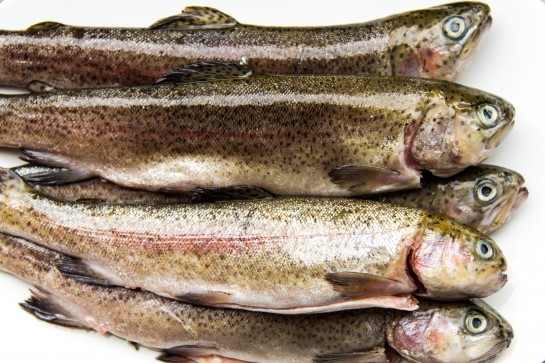 I was delighted to see five small trout available nearby for €7.50 for the lot. Each one is enough for one person when served with accompanying side dishes, though those with big appetites would probably want to go for two each. There are the purists, who believe that the absolute best way of serving good, fresh fish is simply pan-fried with a little butter. That’s fine – I completely get the attraction of this, but sometimes I like to switch things up a bit, and anything that helps me use my enormous tub of turmeric is fine by me (seriously, I have no reason why I bought so much!). 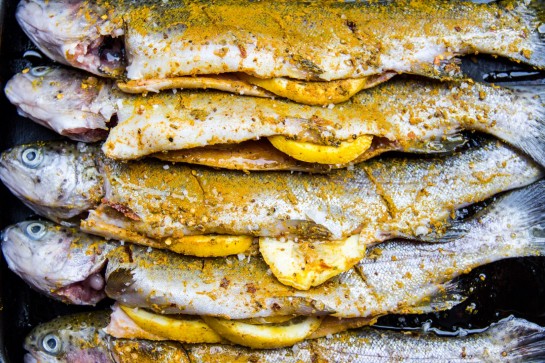 The good thing about roasting them like this is that the delicate flavour of the fish still comes through. It doesn’t get overwhelmed by the rub. You can of course vary the rub to suit your preferences, but I find this particular mix works well and sure makes for good eating! 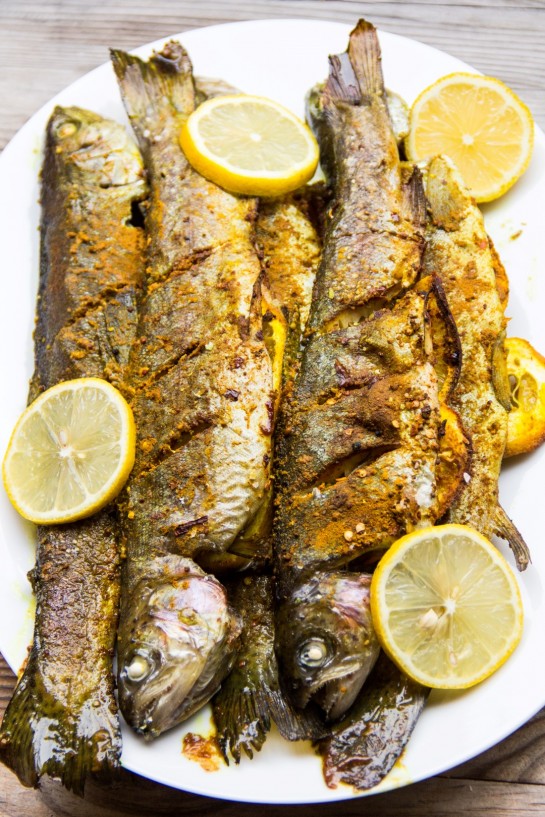 For the rub1tbsp Mustard Seeds

Horror of horrors, I recently ran out of chutney in the house from my previous batch. As a firm chutney lover (seriously, I could eat it with a spoon!) I knew I would have to remedy this situation, but I wanted to try something a bit different. My neighbour gave me some courgettes from her nephew’s garden, exclaiming “tien, j’en ai marre de courgettes!” (here, take them, I’m fed up with courgettes). Taking one look at her kitchen I could see why. It seems she had been given quite literally a year’s supply. She was busy steaming, blanching, and freezing them – even having to shove errant bags of sliced courgette into her tiny ice-box. I wasn’t really in the mood for courgettes, but I’m never one to turn down free, home-grown produce so I started wondering if maybe I could transform them into a chutney. After that my eyes crossed over to the table where I had a large tray of nectarines which hadn’t ended up being quite as sweet as I’d hoped they would be when I purchased them, and a basket full of tired, wrinkled, old apples from a few weeks ago and my mind was set!

Despite using “unwanted” fruit and vegetables, I think this was my most successful chutney to date. Just the right amount of spice and tartness, a wonderful background sweetness – best of all, I was fully expecting the nectarine to collapse into fibrous pulp and disappear in the chutney mass during the cooking, but when it was all done there were beautiful, spicy little chunks of the fruit peeking through from behind the courgette. Definitely one to make again I think! Hope you’re all having a good day 🙂

The great thing with chutney is that there are so many different ways you can customise it and you can really experiment with different spices to personalise it. I didn’t have any raisins to hand so this recipe is without, although if you have them available they go really well. If you’re lucky enough to have a garden then autumn is a perfect time to make this – any fallen apples and left over tomatoes which never ripened can go straight in – green tomatoes are especially good in chutney because they retain their shape and flavour better after the cooking.