You are here: Home / Archives for Quinoa

Happy Sunday everyone – I hope you’re all getting into the festive spirit, if you celebrate Christmas, or just enjoying December if you don’t. I’ll be making up a batch of mincemeat in the week. No Christmas for me is complete without a plateful of Mince Pies and while I am trying to have a leaner holiday this year it just wouldn’t be the same without a couple of my favourite Yuletide pastries. If you’ve never tried them, I cannot recommend them highly enough so do try to give them a try if you have a chance. In case you find the idea of suet a bit off-putting then shop around: you can get vegetarian suet, which consists of hydrogenated vegetable fats, rolled in flour. The difference in the final effect after cooking is negligible – at least to this guy, who admittedly doesn’t have a massive wealth of experience in cooking with the stuff.

We’ll be getting our tree within the next few days, although it’s going to be a smaller one this year. We had to move a fair few things around when William was born and as such just don’t really have the space to devote to a massive bushy tree. Before my recipe today though I wanted to share with you an experience I had during last week though which… let’s say “troubled me somewhat”.

I like to try and take a walk with William during the week. It’s getting chilly out these days, but I wrap him up in his little snow-suit, put him in the sling in front of me, button my coat over the front and off I go. I try and get out about three or four times a week, and walk for about 40 minutes to an hour. William falls asleep quite quickly, and not only is it great to get out and stretch my legs after being stuck in an office all day, but it also gives me some very special time to bond with my son – with the added benefit of giving my wife a break for a bit to do… well, anything she wants, without any risk that the shower she’s taking will suddenly get cut short by little Will, deciding he’s had enough of bashing his little jingly ball with his fist. Anyway – there we were, striding along in the crisp night air and I come across a cat-carrier, neatly placed by the side of the road. As I approach I’m thinking nothing of it – someone must have left it out for the trash, but as I get closer I realise that something’s moving inside. I peer round in through the door and notice that there is not one, not two, but three young rabbits inside, sitting atop a giant pile of hay.

“Well isn’t that just wonderful”, I think. I’m not really quite sure what to do at this point. It’s fairly obvious that they’ve been abandoned there, in such a way that “someone else” would “find” them in the morning. I don’t really consider myself an animal “lover”… at least not to the same extent that some people are. Don’t get me wrong – I enjoy their company. My apartment wouldn’t be the same without my lovely cat – I like it when he snuggles up next to me purring, I laugh when he does his evening business and shoots out of his litter-box like something bit his tail. He brings a warm presence to the place! Some day I wouldn’t mind getting a dog too, but I’m certainly not the kind of person who would ever value the life of an animal over that of a human. What I do consider myself to be though is an animal “respecter”. I was raised to have respect for other people and other animals, and part of that includes not dumping your unwanted pet by the side of the road. Seriously, asshole, if you get an animal you’re taking on a responsibility. A responsibility of care and if you decide that you don’t want it anymore, or can’t care for it anymore… re-home it. Ask some friends if they want it; take it to an animal shelter; at the very least you could cough-up €50 or whatever it costs to have it put down humanely, instead of dying in a box on the street.

Sadly, not only small animals, but even larger ones like cats and dogs are all too readily available in pet stores and I don’t like to even think of how many creatures are going to be dumped somewhere or just maltreated come January, when the excitement of the new puppy wears off and the family realises that he’s chewing on everything in site, or pooping everywhere, or that gifted pet guinea-pig no longer seems quite so cute once the child realises it’s going to have to clean out it’s poop covered litter for the next ten years or so :(. Back to the bunnies though – I don’t know if you’d consider this as being a happy ending – in the end my wife and I took them to the police station down the road (seriously, what else should I do?). The officer on duty looked rather bemused but did take them in the end and said that he’d get animal control to come and pick them up. No idea what happened from then on, but hey – at least they weren’t stuck in a box by the road all night :). 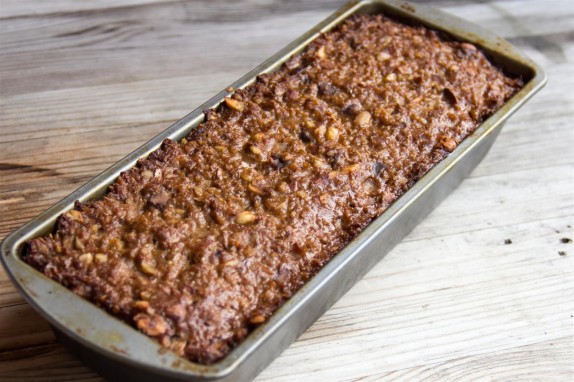 Anyway rant over – sorry if I bored you – and now onto a happier, and more tasty topic. With Christmas coming up I’m sure many of you will be thinking of a wonderful turkey (or duck, goose, capon, etc…) lunch. What about our poor veggie friends though? What can they eat in place of the traditional Christmas turkey? This is something my mother used to make a lot (which my sister and I used to rather rudely call a “nut gross”, but I promise it’s not!) which I have modified over time, and it is a perfect alternative to meat as part of a traditional roast dinner platter, or even in addition. It’s incredibly adaptable – you can add grated cheese, adjust the herbs, the nuts, even pack in some chopped figs or apricots, or a slosh of brandy for a more festive touch. In this example I used quinoa, but I’ve also previously used brown rice – both of which work very well.

My one point of sorrow is that it’s… ahem… not the most beautiful of dishes once cooked. It’s kind of a grey mass inside, but I hope this won’t dissuade you. I assure you that it’s actually very, very tasty, and definitely well worth a try!

I’ll be back soon – you may have noticed that my posting frequency has decreased a great deal from once every three days to once every… five, six days. I’m having to take a rather laissez-faire approach to my site right now because life is pretty darn busy, but I’m still here, and not going anywhere – fear not! :). Have a great day everyone! 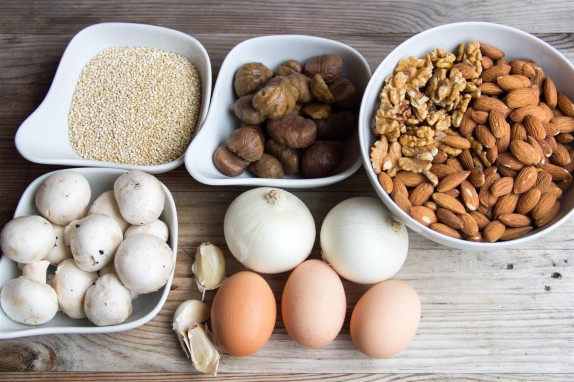 I’ve been saying for a long time that I’m pretty darn late to the Quinoa party. This meal is officially the first time I’ve tried it and I have to say – it’s not bad. Very filling and low in calories. My wife very kindly told me that she’d never had “good quinoa” before, until she tried mine, so that’s something, eh? We’re going some beetroot on our balcony at the moment. It’s being grown rather intensively in a pot, so I wasn’t entirely certain they would yield any results, but I pulled a couple up to check on them and sure enough, there are some delicious little beets at the end of the stalks.

I’d recently seen that the greens of beetroots could be eaten so I was looking forward to trying these. I then became curious as to whether it was actually necessary to boil beetroot before it could be eaten and joy of joy, it was not. It’s actually pretty delicious when raw – a bit like a carrot – so I decided to stick these on top as well. Last but not least, the swordfish! It’s been a very, very long time since I had any swordfish and alas I almost *never* see it over here. As luck would have it we happened to see a special deal on tuna and swordfish last week. I managed to get some non-albacore tuna (albacore makes a nice tuna steak, but sometimes it’s nice to have a change) and some wonderful swordfish. The whole meal was actually incredibly filling, and yet pretty darn healthy. The only thing missing would have been some chopped coriander sprinkled over the top, but alas I forgot to buy it!