Today I thought it was time to revisit my nougat recipe which I posted some time ago. We had gone shopping in a large supermarket in early July and they were gearing up for Ramadan. Since France has a large muslim population then just before and during the festival of Ramadan it’s always easy to find a whole treasure trove of ingredients which are not normally that easily available. The same is true during Chinese New Year when some stores devote entire aisles to vast freezers containing giant boxes of shrimp and absolutely gargantuan sacks of rice and other Chinese staples, to name but a few.

One of the things I eagerly grabbed from the shelf during this trip was a large tub of honey-flavoured glucose syrup.

“What are you going to use all that glucose syrup for?”, my wife asked with a shocked look on her face.

“Ah, erm, I’m going to, er, make, candies and, er, stuff!”, I sheepishly replied. Yes – I hadn’t really thought that far ahead. I just saw it and immediately went into “bargain-hunting” mode. The last time I wanted glucose syrup I had to order it online and pay a fortune for delivery (including 2 separate trips to a local delivery point when DHL incorrectly reported it as being “delivered” on their website), so to be able to get it from a store – and a honey-flavoured variety too? What a joy! 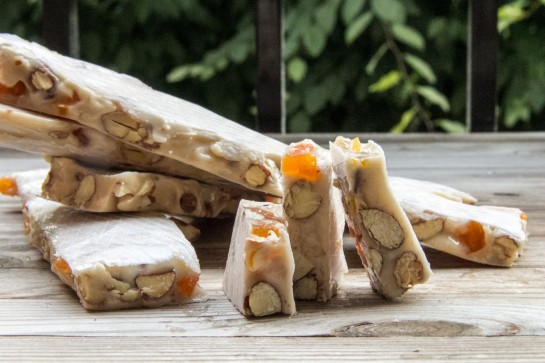 I thought about making Turkish Delight but I still had a pack full of wafer paper left over from when I made Calissons so I needed something which would use up some of my stash of that. Well, it just so happened that we also had giant bags of almonds and apricots on hand (thanks to the supermarket selling these on a special deal for Ramadan as well) so I made up my mind – nougat it would be!

Now, you are going to need a sugar thermometer for this and you’re also going to have to do some calculations for best results. Did you know that you need to adjust the cooking temperature based on where you live? For every 300m above sea-level that you’re making this, you should subtract 1 degree Celsius from the final temperature (for you non-metric users, that’s 1 degree Fahrenheit for every 500ft).

For nougat, sugar is heated to something called a “hard ball” stage. Dropping some molten sugar into a glass of water will form a hard ball which won’t collapse when removed, although it should still be malleable when squashed, and the magical temperature? Hard ball stage is achieved between 122 and 129 degrees Celsius – a small window to yield deliciousness. You may need to experiment to identify the perfect temperature for your preferred consistency but it’s well worth it. This makes a fantastic gift for friends and family, or just to enjoy alone! 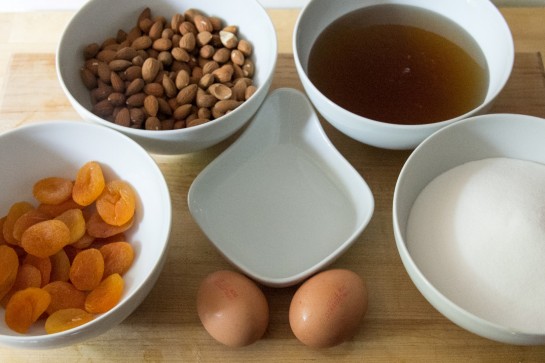