Hi there folks. It seems like absolutely ages since I last made a post. Things sure seem to get away from me these days, but I figured I have a bit of time now, and I had a few recipes ready to roll (four in fact), so why not write up a post? I’ll be writing about my artichoke and coriander dip further down, but I’ll tell you first that today’s going to be a fun day! My wife is out all day… it’s me and my son – against the world. Well, we’re actually going to meet up with my wife’s aunt and cousin (so, my son’s, er, great aunt (?) and… “great cousin” (??)). We’ll go out to a giant indoor playground and then round off the afternoon with cake.

Speaking of my son, and following on from my previous post I thought you’d all like to see some proof of just how great Vegemite is. After all – if my son likes it, it has to be awesome, right? 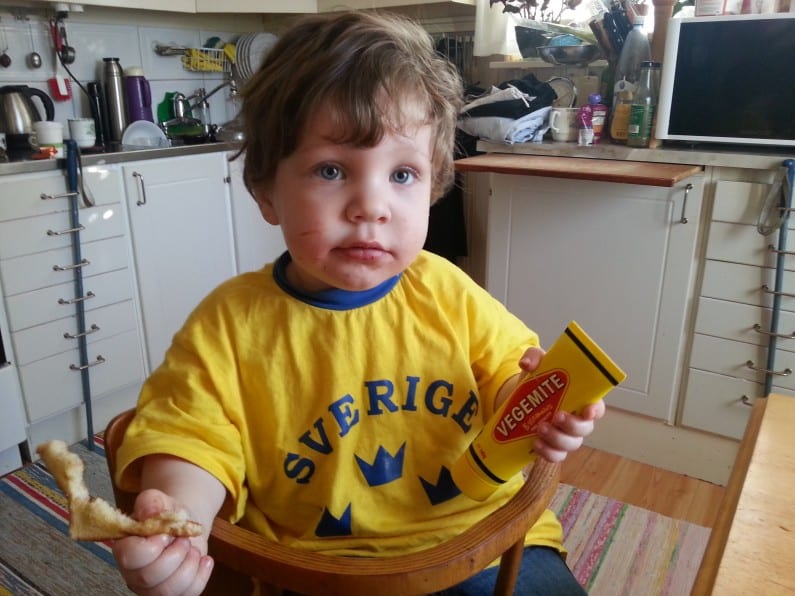 I recently had a dip crisis. “So long had it been”, I thought, “since I’d eaten dips”; and not just one or two dips. No, I wanted five. Over the next three posts I’ll share some of them here. You’ll have to excuse the boring photos. I basically used the same backdrop and swapped out the different bowls for each photo. One of the dips, while great, I didn’t get around to photographing because, well, it just didn’t “look” good. Hopefully I can share it in the future when I’ve figured out how to pretty it up a bit, and lastly the fifth and final dip was an unmitigated disaster.

On another blog I follow I’d recently read about a hummus with thai green curry flavour and coconut milk added in. It wasn’t something they’d made – rather something they’d received as a gift from a company specialising in hummus. I thought it sounded fantastic so set to work trying to reproduce something similar. I have just one word for what I ended up with: “Bleurgh”. Bad, bad, bad. I hope the commercial version was more successful, because my attempt sure wasn’t worth much. 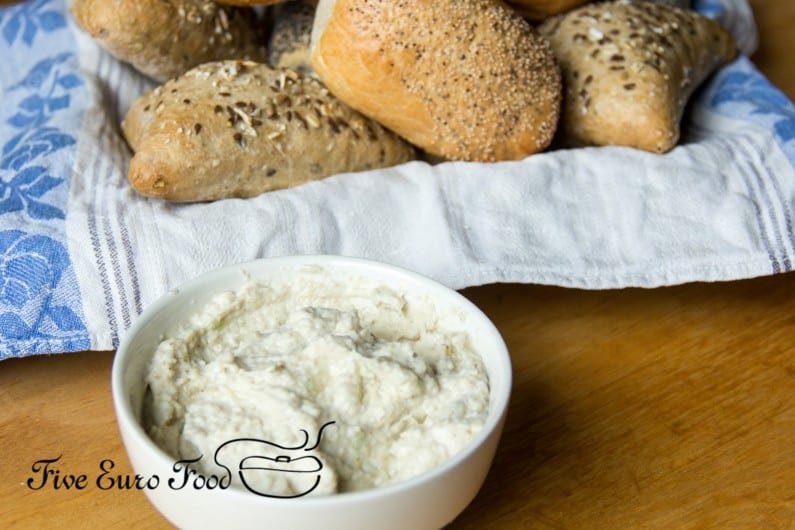 Anyway, on to today’s recipe of artichoke and coriander dip. Who could have thought that coriander would pair so perfectly with artichoke? Not me, that’s for sure. I knew I wanted to make something artichoke-based, and I had a couple of spring onions in the refrigerator so those went in too. I would normally add cumin, but there was none in the house so I chose coriander instead and boy am I glad I did. One of the tastiest dips I’ve tried so I’d thoroughly recommend it!

A super easy, wonderfully light dip with the fresh taste of spring onions, warming notes of coriander and a base of hearty artichokes.