My wife belongs to an expat mothers’ group in Paris (called Message, in case anyone ever ends up having a baby in the Paris area. They’re very good – they offer all sorts of resources and you get to meet a lot of fellow mothers; many of whom are, or have been, in a similar situation to my wife and the community really puts you at ease about the prospect of giving birth in a foreign country). Once a year they have a bring and buy sale to raise money and a couple of weeks ago my wife decided to volunteer a couple of hours of her time, helping set the stands up and so forth before they opened up. I got to spend some quality time with my son and set off to explore the surrounding streets while I waited.

Despite William now weighing in at a hulking 12.1kg (and incidentally I think I’m really going to have to retire the sling I use because he’s now such a big lug that my back suffers terribly after even a short time with him in it!) I was in luck this day. The sky was blue, even if there was a brisk wind, and the sun shone down from the sky, and… what’s that I saw at the end of the street? Yup – it appears that the town has a market on Saturday and it was in full swing when I arrived. I stopped by an ATM to take out some money – with the sole intention of buying a coffee, and a coffee only. I hadn’t had one yet so I wandered past the myriad vegetable stands until I came across a bakery which served coffee. I went inside and was delighted to see that there was a huge bank of ovens down one wall and a flour-covered baker was in the middle of pulling out huge sheets of freshly baked pains au chocolat. Peeking into the back of the bakery I could see an array of various rolling and mixing machines. I was so pleased to see this… normally, a lot of the baking goes on behind the scenes in bakeries… sometimes even downstairs in the building’s basement, so seeing freshly baked pastries being pulled out of the oven in front of your eyes was a real treat for the senses. I was a good boy though and avoided the buttery treats… sticking to just my usual double espresso.

After drinking this I then started wandering around the market and wow, do I wish we had this market near my apartment. They had a Greek and Cypriot stall, an Italian stand which was even selling Limoncello, which I’ve never seen sold before, not to mention the cold meats available and just up the way was another place selling fresh roasted chickens, potatoes, stuffed turkey rolls and ribs. I walked past a stall selling a scarily large quantity of different cheeses, as well as massive mountains of fresh butter. “Must resist” I thought… and then I saw them – goose eggs. “Only €8 for 3” said the sign. I’d had duck eggs in England and had been eager to also try goose eggs, so I cracked (pun fully intended). I bought three and unfortunately it all went downhill from there. I stopped by the Greek and Cypriot stand where they had a bewildering assortment of different olives and different salads and dips. I was out of control… the guy kept giving me new things to nibble on: “Hey, you like garlic? Try this!” to which I invariably replied “Oh my God, ok, give me a box of that”. Close to €70 later I had a bag full of various Greek salads, 3 bags of olives, a bag of round, sesame seed covered breads and some goose eggs. Oh well I thought, it will be a nice surprise for my wife and make a delicious lunch… and then I walked past the place selling freshly grilled ribs. I think you know where I’m going with that. It made for a great lunch though – definitely a market to visit again!

After that I went to sit down and wait for my wife next to the fountains outside the hotel where she was volunteering and had a well deserved rest, watching the sun form a little rainbow in the spray from the fountains. No pot of gold at the end of that though sadly. 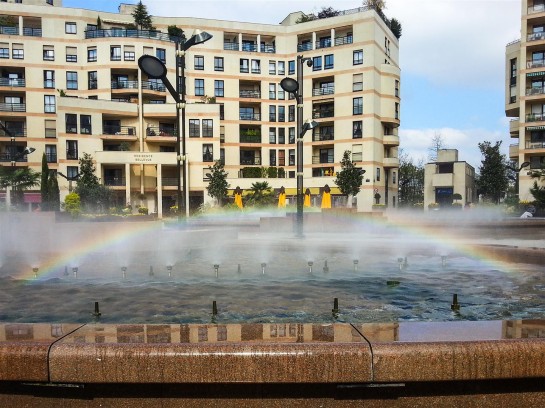 The desire to make this recipe was borne out of my purchases this day. I wanted something which really showcased those beautiful, creamy white goose eggs I bought, and after some searching around, my wife found this 1900s recipe to try. It’s very adaptable. In its current form it’s vegetarian, though you can also add pancetta or bacon to bulk it out. I used a fantastic vegetarian gravy recipe my wife knows, which I’ll post next time, though you can equally use a meat gravy. Obviously, I realise goose eggs aren’t common in everyone’s kitchen, so substitute in two hen eggs for one goose egg. Enjoy, and I’ll be back in a few days with the gravy recipe! 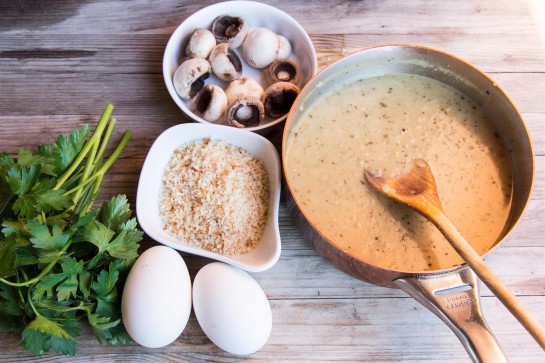