You are here: Home / Adventures / Beetroot Greens Curry and a trip to the other lake

Happy Sunday everyone. I hope you’re all having a great weekend so far. I’m off to IKEA today (gee, I sure seem to go there a lot) to buy some sort of storage solution to handle our overflowing cupboards. It’s not that we have an excess of stuff, it’s just pretty badly organised. In our hallway we have some very large floor-to-ceiling cupboards, built into the wall. We store all sorts of things in there – camera equipment, shoes, coats, a pizza stone, jars of jams and preserves… I think there’s even an old computer box shoved in there somewhere. It’s not perfect, but at least things don’t come tumbling down and bury you when you open the doors. In any case, we’ve just started doing a bit of a clean up. We’ve vowed to go through the apartment, room by room, and give it a good clean. Finally sorting through that sack of papers and documents which has been mounting up over the past few months. I tell you, banks are the biggest culprit for sending you unwanted paper. I’ve switched over to digital statements for every single account, but there’s one account which doesn’t support this feature it seems and every couple of weeks we get a new envelope each from the bank. Of course, they’re not content with sending both of us a statement consisting of several sheets of A4 paper, but naturally they have to stuff in some literature telling us about their “fantastic new borrowing rates”, or urging us to open up yet another savings account.

I find that charities are really bad for this as well. It doesn’t matter how much you’re giving to them each month, they’ll always write to you (by letter of course, never by a more environmentally friendly method) asking for more. If you happen to have donated to an American charity, from Europe, then they’ll even send a letter out to you by air-mail. I take a look at the stamp and see that they spent $1.50 on postage and I despair. Come on guys… save your money. You could have used that money for something so much more useful than sending me junk across two continents which I’m going to put straight into the recycling bin.

Anyway – I managed to head out to take some photos on Friday evening by the lake (a different lake… not the one with coypus). The weather was absolutely terrible and it soon started raining, but it was nice to get out and about with my camera. 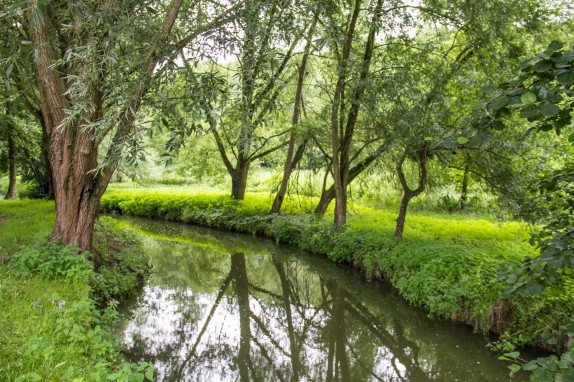 It started off pleasant enough though. I took a little wander by the river and tried my best to sneak up on a heron which was sitting on the opposite bank but alas, whenever I got within shooting distance it heard me and flew off. I did see a little duckling, paddling around in the water, but again, as soon as I went close, it frantically swam back to its mother, sitting in the reeds. 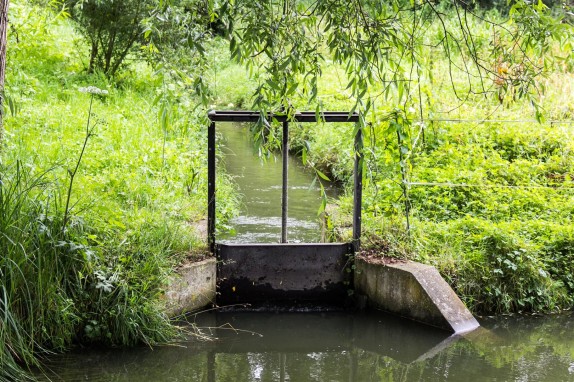 This is the river which is fed by the lake above. I’ve actually never walked along this part of it, and I soon found that there was another little stream, feeding into the main river, controlled here by the little sluice gate. I made a mental note to explore where that stream comes from next time. You may be able to see a fence on the right-hand side of the stream here. It would appear that this is someone’s back yard :(. They’re totally living the dream there… I’d love to have a stream or river at the bottom of my garden… I’d really make it a nice place to sit and relax though, instead of just letting it get all overgrown with nettles. 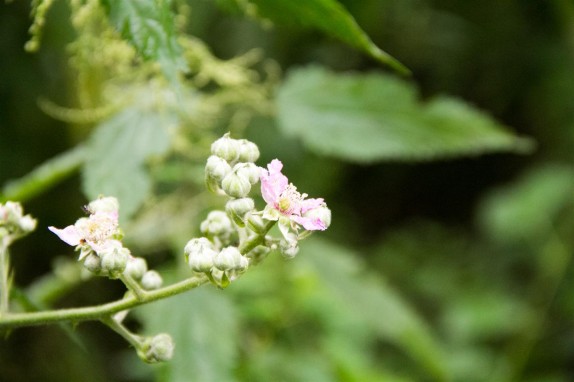 On my way back to the lake I noticed that the blackberry bushes were flowering nicely – always a good sign. Another month or two and we’ll start having some nice, plump blackberries. Last year I missed their prime. By the time I got out to pick some, it seemed like the bushes had been picked clean but this year I’m going to try my best to get a nice harvest from the hedgerows. 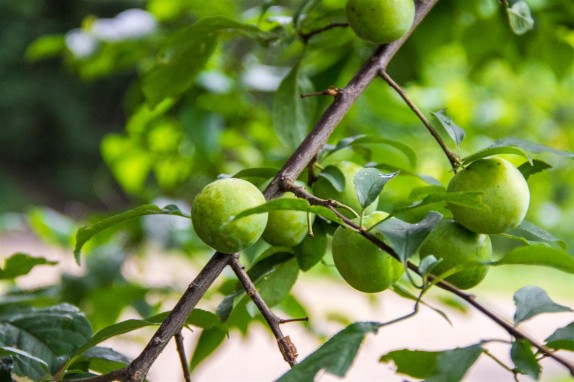 Back at the lake, I noticed these beauties growing on a tree. I’m not entirely sure what they are, but I think they might be crab apples. Thinking about it now, I should have picked one and dissected it at home – oh well, next time maybe 🙂 At this point, it started to rain quite hard so I dove into the forest bordering the lake for a bit of shelter, in the hope of finding some toadstools to photograph. Mother nature wasn’t really playing ball that day though and there was nothing to be found, although there were plenty of puddles and lots of mud. 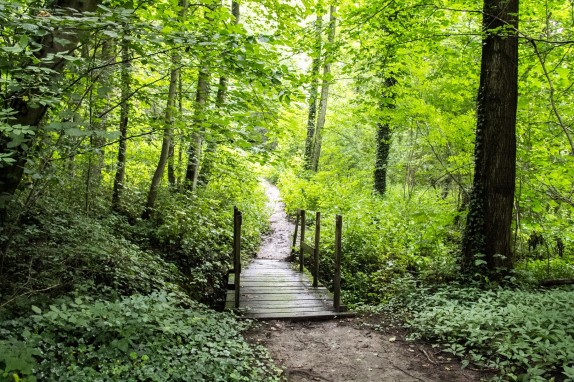 I actually discovered a little path which I’ve never seen before – it leads right down to the water’s edge and goes over a stream via this rickety old bridge. I’ll admit to being a bit overcautious and poking each plank of wood with my foot before stepping on it. Falling through a bridge isn’t my idea of fun, but luckily it was strong (enough) and I didn’t end up on my backside in the mud and water below! 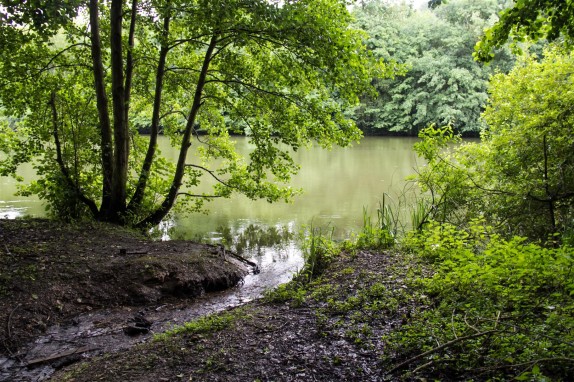 On my way back I found that at the very end of the lake there’s a smaller “feeder” lake. A river seems to flow into this smaller lake which then feeds the larger lake. Because the smaller lake is higher than the main one there is a small, but fast, waterfall as water crashes down and what should I see in the middle of the raging torrent of water, but a small branch. Perched on the branch were two young ducks, and their mother was swimming around nearby. It didn’t seem like a very restful place to sit, but I suppose the ducks don’t really care about that! If you’re interested, I actually filmed them for a bit and uploaded the clip to YouTube – you can check it out here. 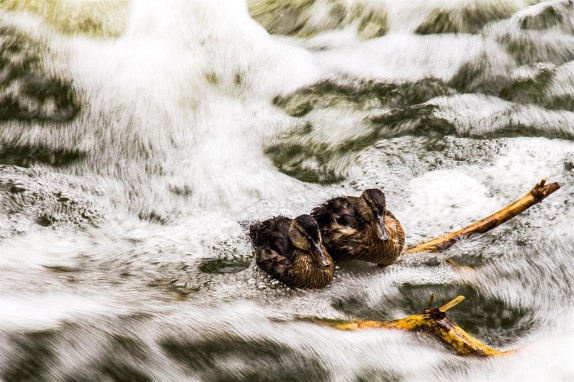 On to the food though! In my last post I did promise you a recipe using the beetroot greens. If one counts these wonderful, edible “extras” as an added bonus of buying raw beetroot then when you think about it, this dish is actually incredibly cheap to make. I think it probably gets the prize for being one of the cheapest things I’ve made on my site – definitely the most satisfying cheap dish. Think about it – beetroot greens would normally be chucked away, so let’s count those as not costing anything. Potatoes? They cost peanuts, and what else is there? Water? A bit of spice? A bit of oil and some onion? Yep – this is cheap food at its best, and the complex, earthy flavours of the beetroot greens really give a great flavour to the dish.

Thanks to the potato this is a one pot meal. There’s no need to cook up any rice although you can if you really feel like it. Incidentally, for next time, I found that the dish would really go well with something that has a fresh flavour so I’ll be serving it on a bed of lettuce leaves next time, with a generous dollop of raita as well.

Have a great day everyone and see you next week! 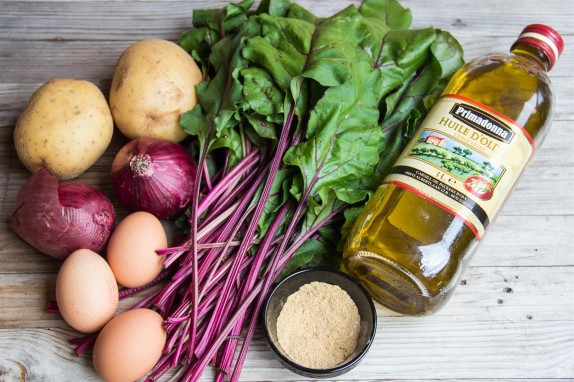