I should mention before I begin that I’m not really a fan of unethical food. I try to buy free-range meat, I always buy organic, free-range eggs (and am thankful that I live in a part of the world where those terms and their usage is actually regulated, as opposed to some countries where any egg company can print “Organic farm fresh” on a box, no matter what the condition of, or the feed given to, the hens). I shun foie gras (though I tried it once and feel dirty for saying it was so delicious), and up to this point I’ve gone through most of my life without eating veal. I don’t know the precise ins and outs of calf-rearing, but I do know that in recent years conditions have improved  a fair bit. The use of crates is now banned in Europe since 2005 – with the exception of Switzerland, interestingly enough – and for an industry as closely linked to milk production as veal is I do feel it’s a least a little hypocritical to consume one and refuse the other.

In any event – this isn’t supposed to be a post about the ethics behind the meat industry. Today I’m going to be making a blanquette de veau, known in English perhaps as a veal ragout, but it loses some of the charm of the name in translation I feel. One of the most important things in a blanquette is that the meat is not browned – at all. Many dishes start off with searing the meat on the edges, locking in the flavour, but there’s none of that here. The veal is boiled to create a stock, which is then thickened with a roux and a liaison of cream and egg yolk.

The result? Comfort food, French style! Pretty much everyone has had a blanquette de veau in France, and it seems that pretty much everyone loves it too. If you can’t get your hands on veal then apparently you can use any other white meat – rabbit, chicken, pork, or even lamb (according to Wikipedia, though I wasn’t aware lamb was a “white” meat). 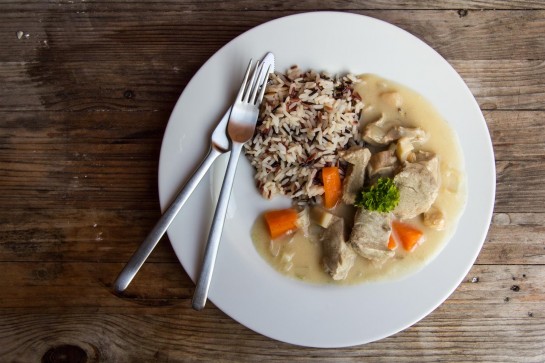 I was very pleased to finally try this dish. The flavours were mild, and at first it seemed perhaps too mild, but after a few mouthfuls I realised that actually, that is no problem. These days, we’re so used to eating things which are heavily flavoured and spiced, sometimes it’s nice to just enjoy the basic flavours for what they are – meat, a delicately flavoured, deliciously smooth sauce, mushrooms and carrots. I also learned a lot about sauces from this endeavour as well. It’s quite an involved dish – it took me no small amount of time to prepare, but it’s the kind of dish which teaches you several core concepts commonly used in traditional French cookery.

I wanted to write a little about the history of this dish as well because this dish is seriously old-school – it’s been around for a long, long time, but a search yielded a great deal of information on “variations” of the dish, but not a great deal of concrete history, so – sorry about that. If anyone does know any history about the dish do please let me know and I’ll update the post here.

Anyway – I hope you get a chance to give it a try. I’ve made a few adjustments and modifications – hopefully for any blanquette aficionados out there it’s still relatively true to form. I’ll be back in a few days with something sweet! As they say here: “À plus”. 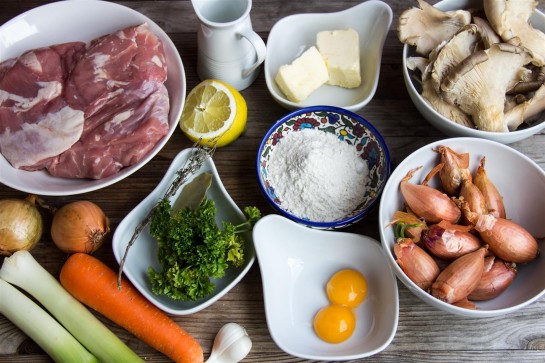 For the bouquet garni and stock flavouring