Who doesn’t love marmalade, right? Do you know what makes marmalade even better? Using fancy ingredients, like lemons or, in this case blood oranges. Of course, they’re not very “bloody”. I made this a month ago or so and we don’t get the most amazing produce at times up here in the colder months, so sadly these are blood oranges in name alone, but think how incredible the colour could have been, had the flesh been that gorgeous, rich sanguine colour.

As you can see, although some of them were starting to turn a bit, the blood oranges never really fulfilled their full potential…

They tasted great though, and so did the blood orange marmalade, and that, my friends, is what really matters.

It had been so long since I had some good marmalade, and I’ve posted a couple of marmalades before – lemon, and quick orange – so I figured it was time I posted a “slow” orange marmalade. I think this particular recipe might not be for everyone. I absolutely love my marmalade dark, bitter, and packed with chunky bits of peel. Others prefer their marmalade pale and “bit-free”. My mother makes a good dark marmalade but since she’s almost a thousand kilometres away the possibility of “popping over and stealing a jar” is non-existent.

I adore canning and preserving things. I’ve never really tried pickling things (aside from eggs and beetroot), but there really is something incredibly comforting and satisfying about having a supply of jams, chutneys, and marmalades stashed away in your pantry. The best thing is, as long as they’re canned properly, they can only improve with time. I left a jar of chutney I’d made for a year once and then cracked it open and the flavours were incredible. Deep and complex; the chutney had already been nice to begin with, but this was some next level stuff!

So what does that tell you? Making jams and laying them up for a few months is a darn good idea. Not only do they make great eating, but if you get into a jam (excuse the pun!) and don’t have any host or hostess gift to give when visiting someone, then you can break out a gorgeous jar of homemade “aged” jam or marmalade.

Enjoy the recipe and the video folks, and have a nice day! 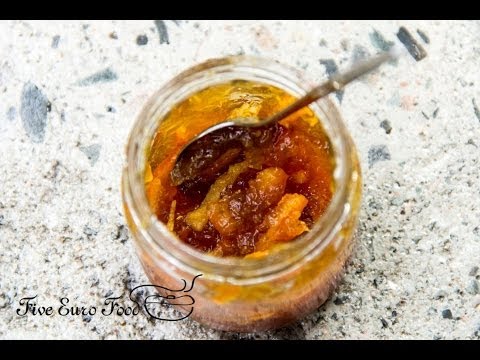 A rich, dark, bitter marmalade made from blood oranges, and packed with delicious bits of peel. Ideal for your breakfast bread, and it also makes a wonderful gift.
Print Recipe Pin Recipe
Servings 6

Stored in a cool, dry place, the marmalade should keep for many months, although it’s probably best to store in the refrigerator once opened.