You are here: Home / Recipes / Baking and Snacks / Cheese Thins, a.k.a. “Cheese Crackies”

Hi there folks, we had a food festival recently in my area, but this wasn’t your standard food festival. No siree, for part of this food festival was dedicated to celebrating food trucks! Yes, that sight so common in pretty much every other country on earth (and it’s not just necessarily in “truck” form, but maybe they’re selling food out of carts on the back of bicycles) seems to be finally coming to France. Baby steps though – it’s not common yet. When I was a kid I could remember going to a big hardware store with my parents on some weekends, whenever they needed something for some home repairs – a tube of mastic, tile grout – and what would there always be outside the store? Two or three vans selling hotdogs, burgers, ice-cream. It seems the French just don’t do street food in this way. Sure – if you’re walking around Paris at night there’s myriad windows opening onto the street – extensions of small cafés where you can buy a crêpe, or a “hotdog” – why is it in quotations you ask? Well, a French hotdog seems to consist of a piece of baguette which is spiked down the middle to create a long hole. A hot sausage is stuffed inside and then the whole thing is topped with emmental cheese and, occasionally, béchamel sauce. Really people? It’s a hotdog… do we have to try and make everything gourmet?

Mobile “street” food though… well, that just doesn’t really exist (I don’t even think I’ve ever seen an ice-cream truck here!) so to have a gathering of food trucks all in one place – well, that’s a big deal! We went down to the mall and there were four trucks there – one of them even sold poutine which I must admit I was tempted by. In the end though my wife and I settled for a burger. They’d sold out completely of fries (probably just as well, the burger was huge) but it was surprisingly good. Well cooked, delicately seasoned meat, a well toasted bun, with caramelised onions and cheese. They’re welcome back here any time! 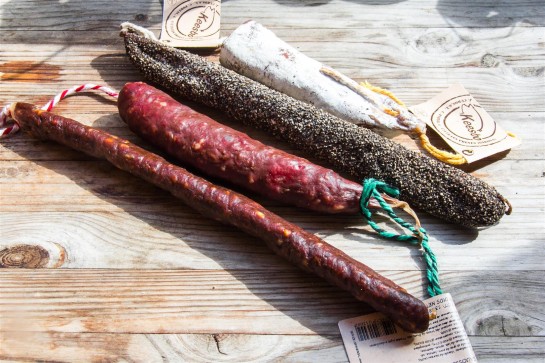 After we’d eaten our burger we had a wander around inside the mall and found that they were actually having festivities inside too. Big stands selling sausages, olives, pretzels, nougat (and this was some giant nougat… seriously, one of the blocks was bigger than my son!) and macarons. I have to admit, I’ve never seen so many macarons in my entire life, and so much variety, though I must say I was disappointed in their appearance. Many of them didn’t have a smooth top or a well formed “foot”, so I guess the makers were really going for quantity over quality there. We bought some olives and sausages though, which you can see above (from top: Olive, Pepper, “Taureau”, made with bull meat, and finally Chorizo).

On to today’s recipe – I saw this posted on Barb’s blog Profiteroles and Ponytails back in the beginning of June and I immediately knew I wanted to make them as soon as I could. As luck would have it, I had the remainder of a bag of puffed rice so I knew they’d be the next thing I made. Sadly I didn’t have rosemary, or Worcestershire Sauce, so I made a few substitutions. I love cheese with a bit of kick too so I added some cayenne pepper, which turned out great.

I used gruyère cheese, which in retrospect I do believe isn’t the best cheese for these biscuits. It has a very rich, nutty flavour and I think something strong, but less complex would work great here – a good cheddar will be what I go for next time, though I’m also thinking you could do incredible things with a blue cheese and cheddar combination!

Barb, thank you for letting me reproduce the recipe, and I hope you’ll ask your mother to relay the message to Raymond that we greatly enjoyed his “crackies”, although I’ll need to remember to push them out even more thinly next time!

Adapted from an original recipe here