The wonderful Nami, from JustOneCookbook published a delightful recipe last year for Valentine’s Day which brought so many memories flooding back to me. I vowed to make this chocolatey goodness, but as is often the case – time passed and I forgot all about my plans, until she mentioned it again this year prior to February the 14th. The recipe I’m talking about is Nama Chocolate, often sold in Japan under the ROYCE’ brand. I have eaten this before (in abundance) on previous visits to Japan but it never occurred to me to try to make itself so I must heartily thank Nami for opening my eyes! I’m a big fan of messing about with recipes but I wanted to make some nama chocolate for my wife this year and I didn’t want it to go wrong so I stuck fairly rigidly to her recipe the first time around. There are no words which can adequately describe just how good it was. So good that I’m already planning on giving it to people as Christmas presents this year. So good that I’d rather eat it than some chocolate from a local chocolaterie here. So good that I think this smooth, truffle-like chocolate might have spoiled me for other chocolates for evermore!

The only caveat to making great nama chocolate is that you have to use good chocolate. Nami mentions using at least 70% cacao chocolate. I must admit I don’t agree entirely with this point. The most important thing is that the chocolate tastes good. Since nama chocolate has, at its heart, only two ingredients – cream and chocolate – you’ve got to be pretty darn certain that the chocolate tastes fantastic. Whether you decide to use plain chocolate, milk chocolate, white chocolate, or a blend of the three, don’t skimp on the quality. I vaguely recall hearing from a chef once during a cooking course I did that she recommended using a chocolate with a cacao content of ~58-65% as this is considered the optimum content for cooking and melting and will yield the best results. This cooking course was a couple of years ago though, so I could have completely forgotten what she said and besides – it’s a minor point. Use a chocolate you like and you won’t be disappointed!

The great thing about nama chocolate is how easy it is to customise. Change the chocolate, change the alcohol (or remove it entirely), dust it with cocoa, dust it with coconut, add chopped nuts, add crushed biscuit… you can really find a combination which works for you! So how did this batch turn out? Well – I need to work on my chocolate swirling skills but the flavour was spot on and just what I was aiming for. A faint hint of the coconut liquor and the slightly coarse texture from the toasted coconut surrounding the velvety chocolate. As for the chocolate – I made one batch of plain chocolate and half a batch of white chocolate to swirl in.

From my experiences with my triple chocolate truffle torte I knew that white chocolate was a real pain to work with. It won’t set the same as “real” chocolate so accordingly I significantly increased the amount of chocolate used compared to the cream. The end result was satisfying enough – it wasn’t quite as solid as I would have hoped, but at least it didn’t ooze everywhere! I have increased the chocolate even more in the final recipe below, but if you’re at all concerned about working with it then I would recommend skipping the white chocolate completely and working purely with plain or milk chocolate which will yield much more consistent results (and of course I heartily recommend trying the original recipe from Nami’s wonderful site too before you start experimenting so you can see what you’ve been missing out on!).

Thanks again to Nami for her wonderful inspiration for, no doubt, many years of wonderful Christmas gifts and delicious, sweet treats! Have a wonderful day everyone – I’ll be back soon with something for all you meat-lovers, as well as the results and next round of my little on-going competition. 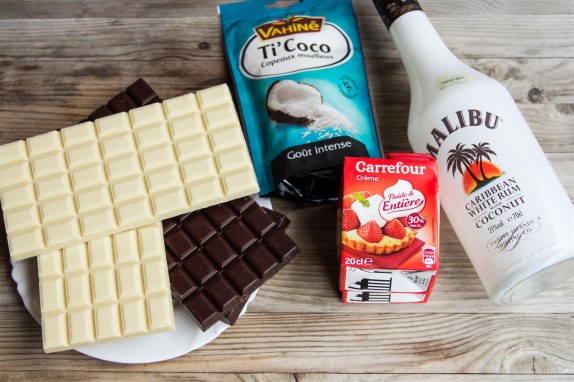