You are here: Home / Recipes / Baking and Snacks / Cream Fudge and how I almost fudged it up, and a celebratory giveaway

Howdy folks. I had mentioned in my previous post that I was going to post some photos of a trip I took last year but it suddenly hit me… today is my 200th post, nay, I should be more specific – my 200th recipe post. I’ll spare you the emotional speech about how I couldn’t have done this without the support of my wife and cat. I’ll just simply say that little did I think, one and a half years ago, that a day would come when I’d written not just 100 recipes, but 200. What a long, delicious journey it’s been so far – I’ve explored some English traditions, shown you some glimpses of Sweden in winter and yet barely scratched the surface of the world of food. Thank you to everyone who takes the time to stop by and read my posts. As a way of saying thank you, I’m going to do a little giveaway in today’s post, details to follow. I hope you all take part; good luck, and thank you again!

Giveaway? OMG YES GIMME! What can I get?

The first item up for grabs is 2 x 14cm Le Creuset Cocottes in a colour of your choosing. Please note it’s the ceramic version, and not the cast-iron one 😀 and they will be given away as one.

The second item is the outrageously useful book “What’s A Cook To Do?” – Think of it like “life hacks” but for the kitchen. It teaches you all sorts of things which people should really know – how to carve a whole fish, how to rescue flavourless fruits, how to make perfectly tender lobster – 484 tips of useful information covering pretty much every topic. 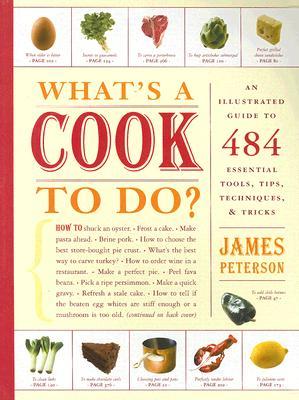 Want to enter? Here’s how:

In addition to this, you can gain extra entries by doing the following. Please leave a separate comment below (one per action) stating which you have done:

The giveaway is available to everyone, regardless of geographic location, and will close at 8pm French time on Sunday 10th June 2012. Two winners will have their comment number selected using random.org and announced in a post the next day. I should tell you as well, if you don’t want to take part in the giveaway, please say so in your comment! Please remember to leave an extra comment per action (Facebook etc) you take – even if you already “Like” me – logistically it’s difficult to work out who does what and adjust numbers and so forth accordingly!

This giveaway is run and paid for entirely by me.

Onwards to today’s recipe though, and today I’ll be making cream fudge. Undeterred by last week’s nougat fail (well, not utter failure, but not something I’d probably pay money for!) I decided to give my new straight-sided pan a whirl (incidentally, if you’re looking for a new pan, I cannot recommend it highly enough! It’s more expensive than one you might pick up from IKEA, but my God, it’s a thing of beauty. Heavy, deep and sturdy. None of this flimsy aluminium junk which is so prevalent these days. I wasn’t expecting it to be so well made, but I’d definitely put it into a “buy it for life” category and I can see myself still baking with this in 20 years time).

Remember my post from last year for Cherry Brandy? I’ve had the leftover cherries sitting in a pot, covered in a bit of extra brandy ever since I bottled up the booze in December and they’ve just been begging to be used. Since I’m not much of an ice-cream eater (I love it, I just don’t eat much of it for some reason) I thought they would undoubtedly go fabulously into a fudge – kind of like rum and raisin. I only had about 150g of cherries though so I bulked them out with some raisins too.

A lot of recipes only use milk in fudge. Nonsense, I say. It’s not like fudge is a “healthy snack”. If you’re making it, then you’ve already committed to the fact that you’re shortly going to be in possession of a billion calorie tray of tooth-melting awesomeness, so you may as well do it properly. Fudge is often made using clotted cream in England, and damn tasty it is too. Unable to easily get my hands on clotted cream in France, I opted for regular cream, but it still gave the final product a fantastic, rich flavour. 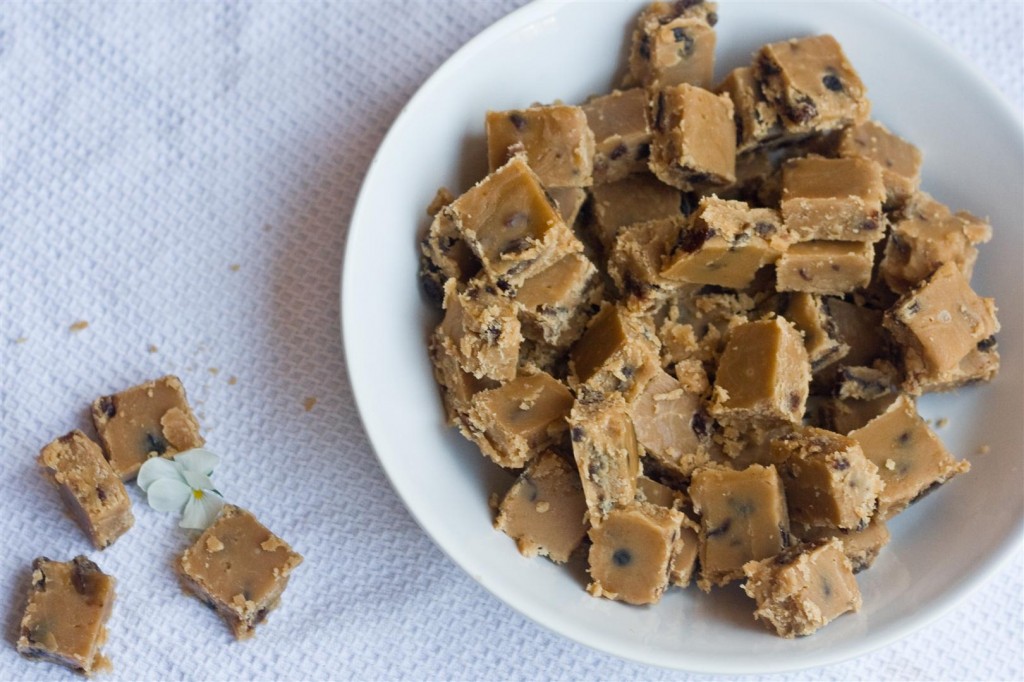 All was going well – I’d managed to melt the ingredients down and they were boiling up nicely; the temperature was slowly rising. The maximum temperature in the “soft-ball” stage is 116 degrees Celsius and I didn’t want to hit the maximum, so when I’d hit about 114 degrees I removed it from the stove, waited a bit and then stirred in the fruit. Into my tray it went and then I waited. I waited, and I waited and finally, after 5 hours it had set… sort of. I left it overnight  and realised then that what I had in the pan wasn’t really fudge. It was a loose, moist, crumbly mixture with a very crystalline consistency and small pockets of liquid surrounding the cherries. Gah! A quick bit of Googling and I discovered that in these cases, you can actually melt the fudge down again, no harm no foul. Bring it back up to the boil and heat to the desired temperature once again (I actually went above the soft-ball stage this time, to about 117 degrees Celsius, though it’s possible my thermometer is slightly inaccurate). As for the crystalline consistency? Well I learned in my nougat making that glucose syrup prevents this, so in went a big dollop of that too.

The result? This is, to me, what fudge is all about. It’s crumbly, it’s rich, and sure, it’s sweet, but you’re not supposed to eat a ton of it. It’s the kind of thing you perch a square of on a saucer next to your after-dinner coffee. Best of all, it’s an awesome gift – seriously, who wouldn’t appreciate a box of this? Future attempts are going to involve layering and flavouring, though I think I’ll reserve that for Christmas gifts, since late Spring/early Summer isn’t an ideal time for sugar-boiling! Just as a side-note, I found out as well that if you can’t get glucose syrup, you can add corn syrup, so now you have no excuse! I’ve been sure to correct the recipe below to fix my mistakes, including the glucose syrup and temperature!

Enjoy the fudge everyone, have a great day and see you back on Sunday! 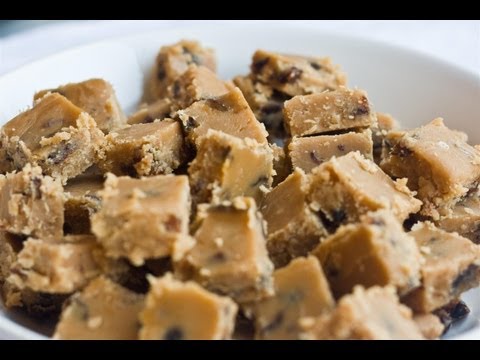 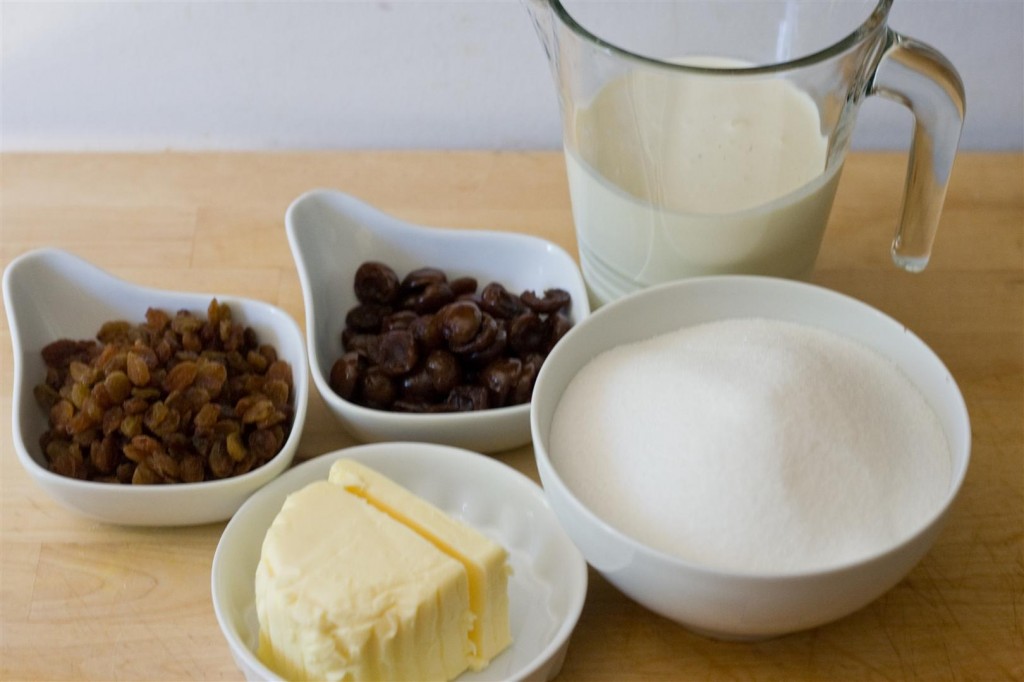