[dropcap style=”font-size: 60px; color: #0B0B61;”]One of the things I recently wanted to start trying was improving my sauce repertoire. I don’t make that many sauces – the ones I do consist mainly of balsamic or red wine reductions, the inimitable béchamel sauce and of course some curious concoctions I brew up myself (which reminds me – one day I’ll post my steak sauce… I love it – hopefully you’ll enjoy it as much as I do, but that’s a post for another day! Anyway, what better place to start than my adopted country of residence right now – France. A bit of further reading revealed something called the “Mother Sauces“. Excuse the giant Wikipedia quote, but I found it pretty fascinating to read about, as well as being a great place to start my saucy adventures (haha) :).

Sauces in French cuisine date back to the Middle Ages. There were hundreds of sauces in the culinary repertoire. In ‘classical’ French cooking (19th and 20th century until nouvelle cuisine), sauces were a major defining characteristic of French cuisine.

In the 19th century, the chef Antonin Carême classified sauces into four families, each of which was based on a mother sauce (also called grandes sauces). Carême’s four mother sauces were:

In the early 20th century, the chef Auguste Escoffier updated this classification to five mother sauces. They are:

A sauce which is derived from one of the mother sauces by augmenting with additional ingredients is sometimes called a small sauce or secondary sauce.Most sauces commonly used in classical cuisine are small sauces. For example, Bechamel can be made into Mornay by the addition of Gruyère or any cheese one may like, and Espagnole becomes Bordelaise with the addition and reduction of red wine, shallots, and poached beef marrow. 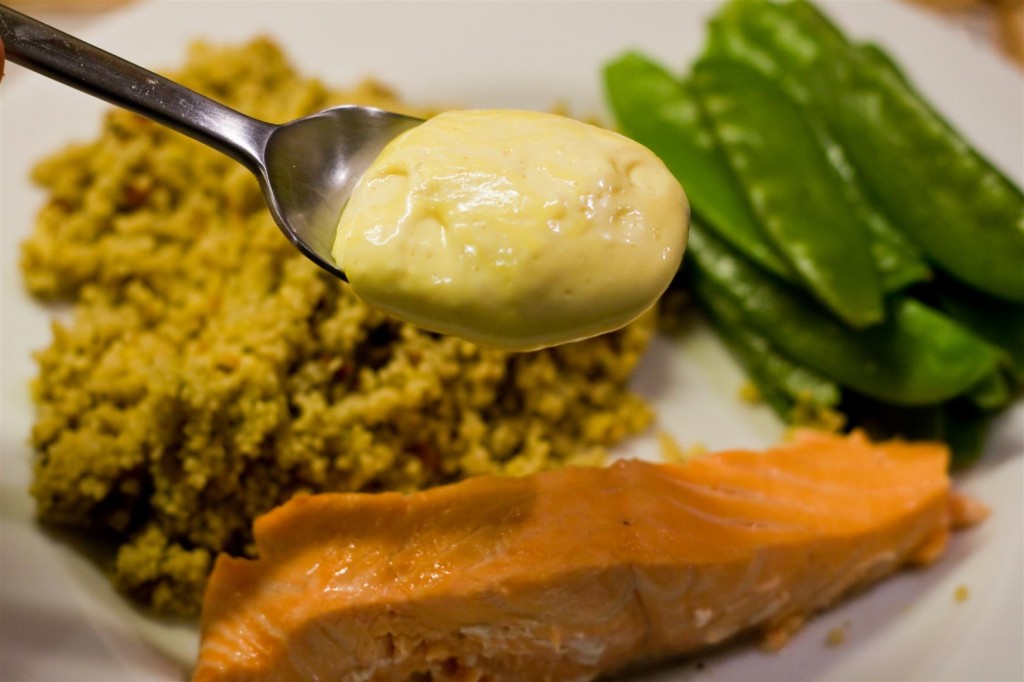 Having recently had some langoustine, and now some steamed salmon, I decided the perfect accompaniment to these would be a good Hollandaise sauce. It’s the perfect pairing for fish and other seafood. Light, glossy and buttery, with a fabulous taste of lemon pervading the sauce. Reading various techniques and recipes on the web I set to playing about a bit and believe that this recipe hits the nail on the head. First of all – forget all you ever read about about this sauce actually being hard to make. Stories of overheating the sauce, causing the yolks to scramble and separate from the butter… unless you do something very badly wrong you don’t have to worry about this with this recipe. It’s simple, it’s delicious, and you get mad props for announcing to people that you made your own Hollandaise sauce, because of this shroud of mystery that often surrounds the sauce as being “oh my God, so difficult”, much like home-made pasta, when you do it yourself and serve it to people it’s instantly impressive!

Don’t be tempted to add too much lemon juice – tastes vary from person to person, but the first time I made this I added the juice from a whole lemon and that was a bit of a citron-overload. Enjoy the sauce, and have a good day everyone!