You are here: Home / Adventures / FiveEuroFood on the road – Adventures galore!

So, here I am in Sweden at last, safe and sound, though not without some stories to tell. There is so much to do and no doubt it will be some weeks before we have taken care of the things that need to be taken care of, but things are gradually calming down. My son is greatly enjoying being able to see his grandparents, my cat seems to have endured the trip like a champ, the car has been unloaded and the clothes unpacked, and we can now start to have some semblance of normalcy again in our lives.

I will be gradually returning to cooking again soon, but in the meantime I thought you might all enjoy some photos of my trip! I didn’t take so many photos during the beginning of the journey. We spent a night in Kaarst, Germany, a night in Odense, Denmark, and a night in Gardermoen, Norway, but the scenery was rather unremarkable in these areas, and besides – I wasn’t there to sight-see!

As with any long car journey, things were bound to go wrong. First off, I had to drive across the bridge between Denmark and Sweden, since I had to make a stop in Helsingborg, Sweden, in order to have my tyres changed to studded, winter tyres. I merrily tapped in the destination while preparing to leave from Odense, only to be met with the message “No routes found which do not involve ferries”. Ahem… in the end I could choose an option to “Travel via” a point on the map, so I went to the map, tapped on the bridge, and lo and behold, it planned a route for me to Helsingborg. I started driving along happily, went over the bridge, marvelled at the wonders of modern construction and engineering, arrived in Sweden, paid the bridge toll (€35!), took a few turns and ended up right back on the bridge again back to Denmark. Oh dear. Back to Denmark, turn around again, back to Sweden, two more bridge tolls later I’m on my way. I had followed my GPS instructions to the letter, so I have no idea what happened there but an expensive mistake it ended up being.

On the journey from Gardermoen to Trondheim, Norway, is where it got really exciting. The weather wasn’t great – cold with traces of snow in the mountains, we took a little detour off the highway  to see a Stave Church in a place called Ringebu. These are medieval churches, built entirely of wood. 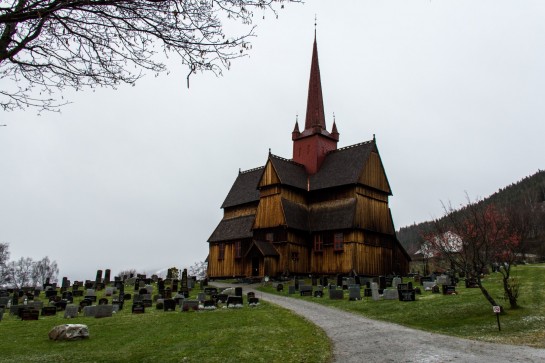 The church at Ringebu dates back to the first quarter of the 13th century. Sadly it was not possible to go inside, but just to be able to see it was an experience in itself. It was bitterly cold, so after a few snaps we jumped back into the car and I plotted a course for Trondheim. “Fastest route” I selected… oh dear. The idiotic GPS decided that a 50km track through a deserted mountain “park” was the best way to go. I say “park” because I couldn’t actually see anything. There was snow everywhere, there wasn’t any kind of building or other person in sight, and worst of all, in a lot of places I could barely even see the road! 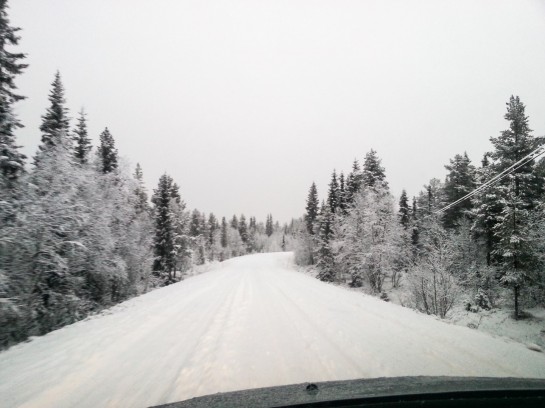 I managed to successfully navigate this bit of wilderness and we were well on our way to finally rejoining the highway when… yup, I came around a snowy corner just a teensy bit too fast. The car spun around and there I was sitting at a jaunty angle in a ditch. Not what I really wanted to happen! As luck would have it, a couple of friendly Norwegians stopped, one of whom had a truck, and could pull me out. After more than an hour I could finally get going again, albeit feeling a bit freaked out. 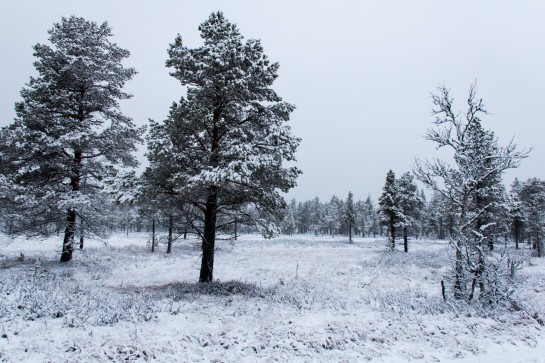 We arrived late in Trondheim, and as seems to be typical for all good little Scandinavian towns, every restaurant in sight closed up by 9pm so alas the only “food” option available for us was the local McDonalds. Still, food is food and it was nice to feel replete after such a day!

Leaving Trondheim to head to Mosjøen, Norway, the next day, you’d never have thought that the weather could have been so bad the day before. There wasn’t a trace of snow in sight, although as we headed further north the weather definitely became significantly colder and more icy. 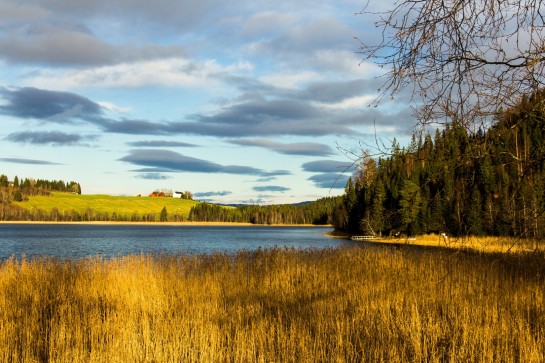 The hotel we stayed at in Mosjøen (simply called the “Hotell Mosjøen”) was very nice. I doubt many people will find themselves up in that part of the world, but I can strongly recommend it if you do. It seems to be a family-run place, so the rooms, while simple, felt decent, and it was nice to not have that “chain hotel” experience, where every room is identical, every piece of furniture is exactly the same and so forth. A free dinner buffet is included in the price, including breakfast as well. It had a cosy little lobby and dining room which made you feel like you were a guest in someone’s home, and very friendly staff, and when I woke up in the morning, I was confronted by this view which was pretty incredible – something I hadn’t noticed at all in the night when we’d arrived. 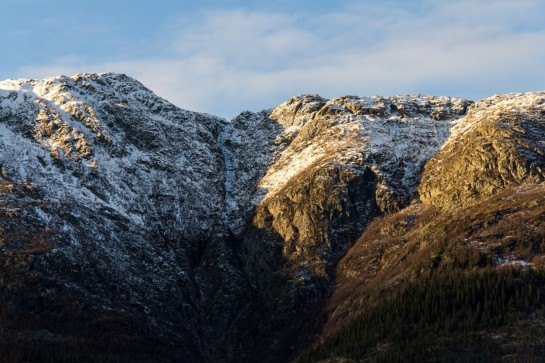 The next day it was time to undertake the final leg of the journey. Crossing back into Sweden and driving to meet up with my wife, son and parents-in-law at their home. The weather was not good – the roads were very bad, and my car was severely laden down which made the handling less than favourable in the adverse conditions. Despite this, and the fact that the 7 hour journey ended up taking about 11 hours, we still managed to take in some sights and marvel at the breathtaking scenery. 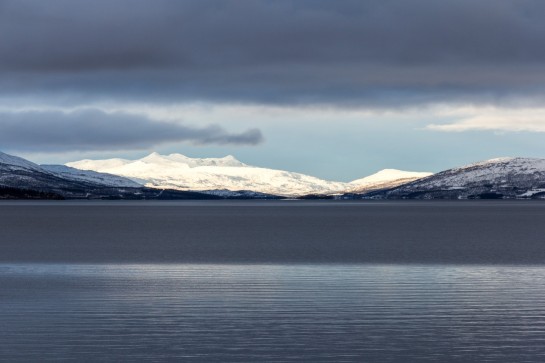 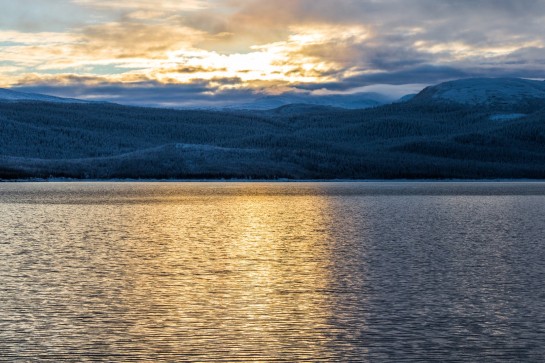 I hope you’ve enjoyed seeing some of the photos of my trip. It’s definitely a trip I would undertake again if I had the opportunity, although perhaps not in the winter! I’m gradually getting back into the swing of things again here, including adjusting to the freezing temperatures all the time. My wife feels a bit sorry for me since, as she says, “it’s only going to get colder”. Yay, I say – bring it on!

I will be back soon with a new recipe, and I will now be able to resume checking out peoples’ blogs once again – sorry I’ve been gone for so long. In the meantime, enjoy this photo of one of the first views of “Sweden” I photographed after crossing over the border from Norway. 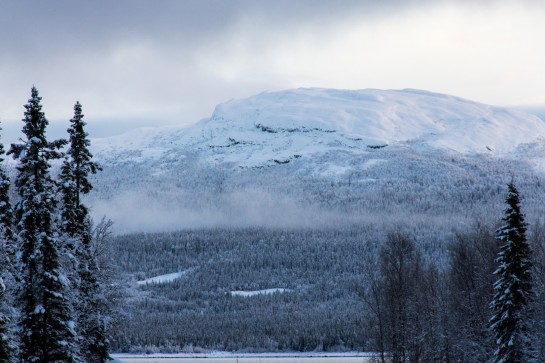