You are here: Home / Adventures / Gluten-Free Knäckebröd, Swedish adventures and a giveaway

[dropcap style=”font-size: 60px; color: #0B0B61;”]So, I’m back folks. Back in France after a wonderful, relaxing break. Naturally, our trip wasn’t long enough, but are they ever? It’s great to see family and friends, and so hard to say goodbye again. I’ve started working again yesterday and in a couple of days I’ll have readjusted to the usual schedule and it will be, once again, as if I were never away. What I do have though are wonderful photos to remind me of my trip and I’d like to share a few of them with you today, and over the next few posts. I also picked up a couple of little craft items which I’ll be offering as giveaways (first one coming up after the photos below), and not only that, but I also picked up a couple of recipes which I’m looking forward to sharing with you. However – all in good time, my friends. First, let’s take a little trip to the snowy north of Sweden. The province of Västerbotten (the official website has some good information and photos!) is the destination – one of the most northern Swedish provinces, with the exception of Lappland (Lapland) and Norrbotten which lie to the north-west and north respectively. The province is famous for a cheese produced there, called Västerbottensost (Västerbotten Cheese) and if you ever have a chance to try this I’d strongly recommend it. The cheese is only produced by one dairy, in the town of Burträsk, and – interesting tidbit of information for you – “träsk” in Swedish (pronounced a bit like “tresk”) means swamp or marsh, and is a not uncommon ending for place names in some parts of Sweden.

While we’re on the subject of place names and meanings, there are a number of places ending with the letter “å” – This, despite being only one letter, means “river” and explains why towns were called such, as they formed around rivers of the same name – Luleå, Piteå, Skellefteå and Umeå for example. Another interesting tidbit for you is that there is actually a (slightly grammatically incorrect) sentence in Swedish consisting only of one letter words – “i å ä e ö å i ö ä e å” (Written down in its grammatically correct form it doesn’t make much more sense: “I ån är en ö och i ön är en å”. For those wondering what that means, it translates to: “In the stream there is an island and on the island there is a stream”. Anyway though – enough word-play tomfoolery. Time to enjoy a few photos.

This was my first experience of Swedish winters and although my wife had told me numerous times before, I still find the idea of the sun setting around at lunch-time a very confusing experience – something which will no doubt take quite some getting used to. Aside from spending a whole lot of time eating great food we also enjoyed taking some brisk walks. In the picture below is a baking house. There’s not much inside – some work surfaces and a large stone, wood-burning oven. Inhabitants of the town where my wife’s parents live can rent out this bake-house if they wish to do their baking. The idea is that you create a great many breads which will last you for a long time, such as knäckebröd (incidentally the recipe in today’s post!) 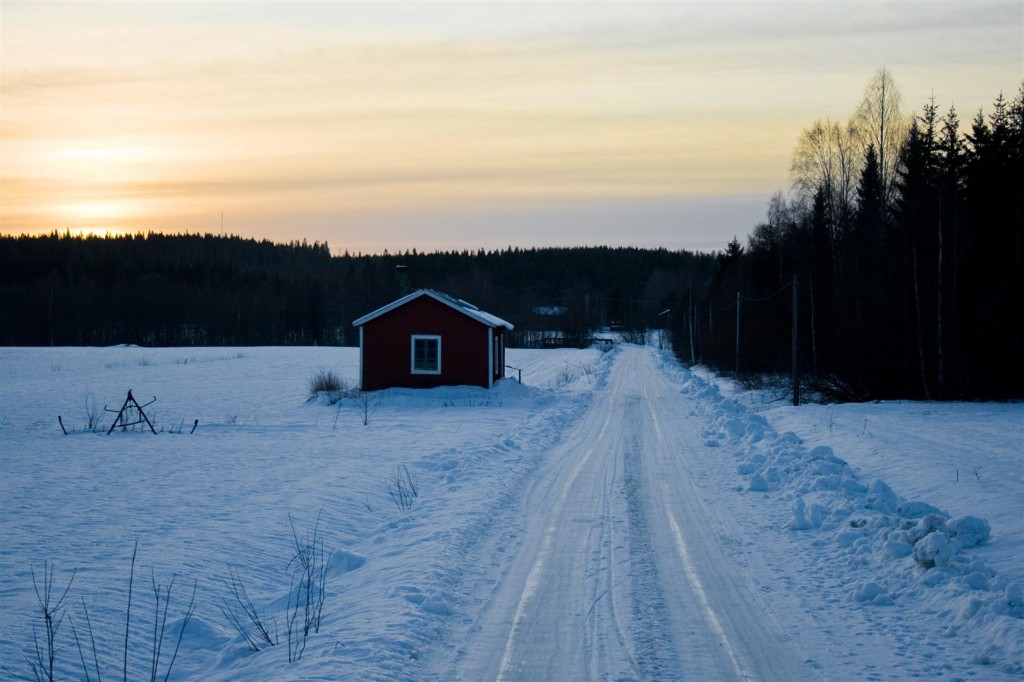 Incidentally, the photo was taken around 11.30am. The sun remains very low in the sky through the few hours of daylight they have. In December, a typical sun-rise will be around 9am, and sunset will be around 1.30pm. A beautiful orange glow can often be seen due to the low sun around 12, and then it’s completely dark by 3pm. In the summer it’s the exact opposite. It will get a little sombre for 2 or 3 hours around 1am and then it’s back to being light again. Despite the darkness, the snow-covered scenery is incredibly beautiful. Rivers and lakes can sometimes be completely frozen over, though when I was there the fastest flowing parts of the river were only icy at the very edges. Snowmobiles are a common sight in the fields and paths at this time of year as well – you can see one tearing away in the bottom left of the photo collage below. 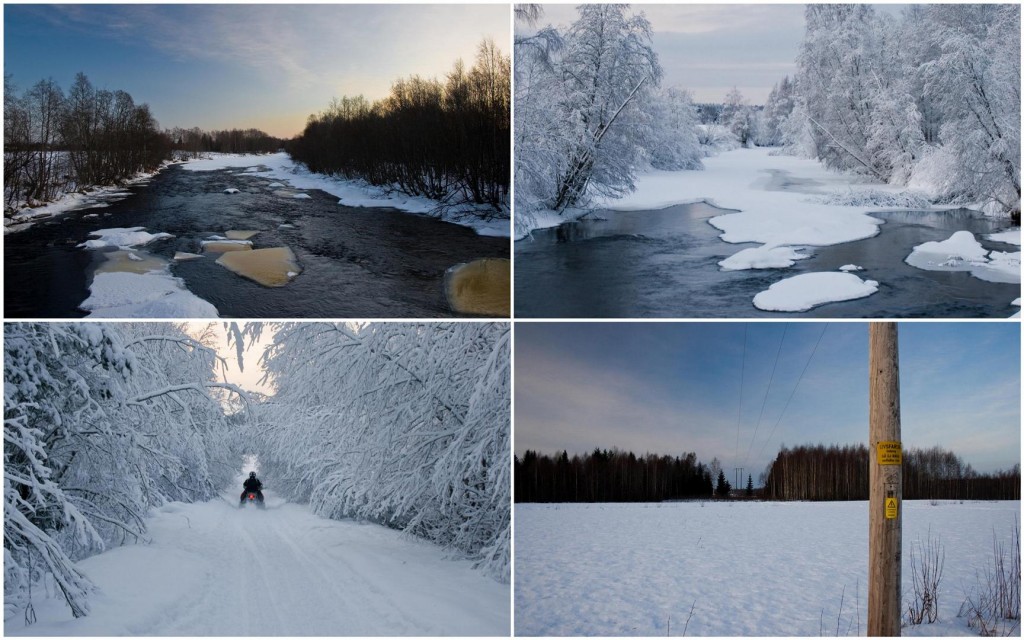 Remember how I mentioned the dark? Well – Swedes love light and have a wonderful way of bringing a little light to the long winter nights. Window lights! I’ve never seen them in any other country but above almost every window you will often see a special plug socket. Into these you can put low voltage lights on cords which hang down, both bringing a bit of light and comfort to those outside, as well as looking very pleasing inside. You can see an example of what I mean in the picture to the left below. 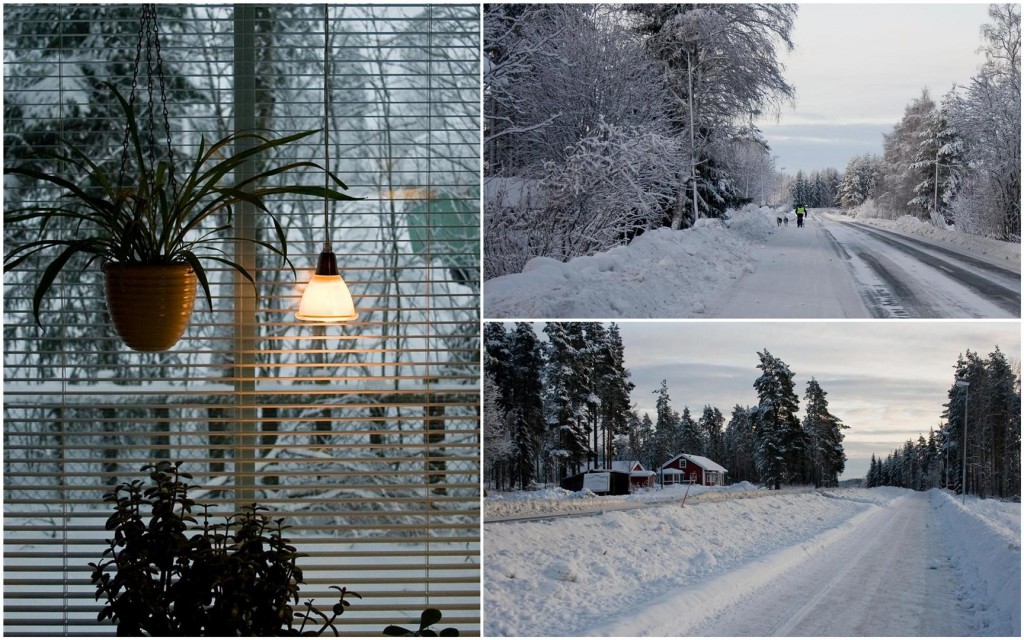 Before I move on to the giveaway (yay!) I’ll show you a couple more photos I took. The first one is a snow-covered field, with an ice-covered tree in the foreground, and the second is some snow-covered trees at night illuminated by a street-light. I hope you enjoyed the photos – most of them will be available on my downloads page, should you wish to see/download any fullsize versions. More photos coming next post 🙂 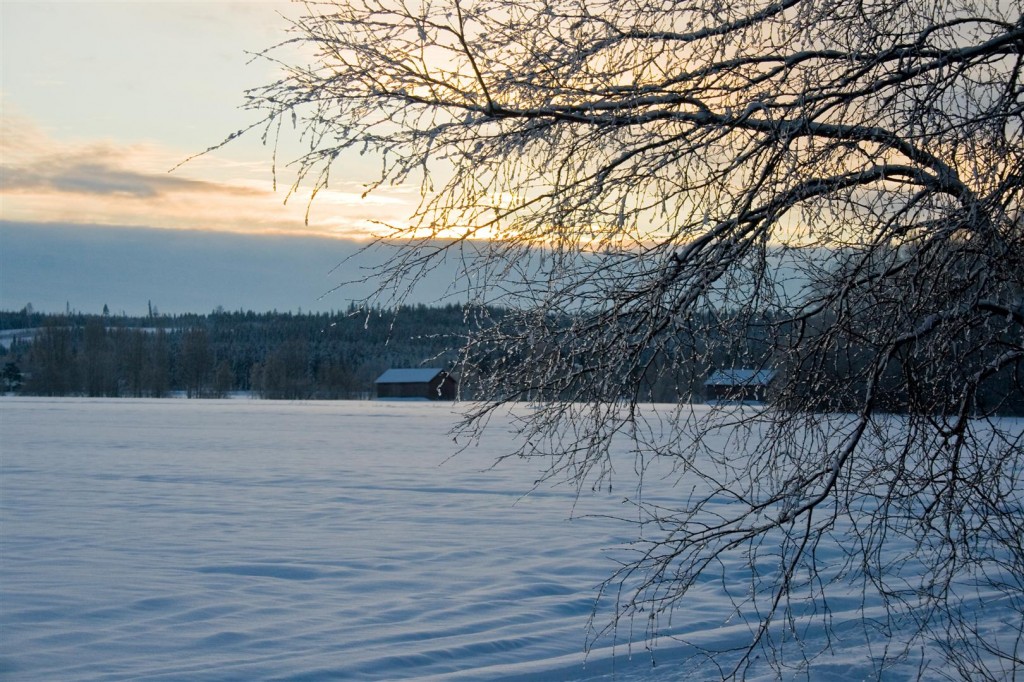 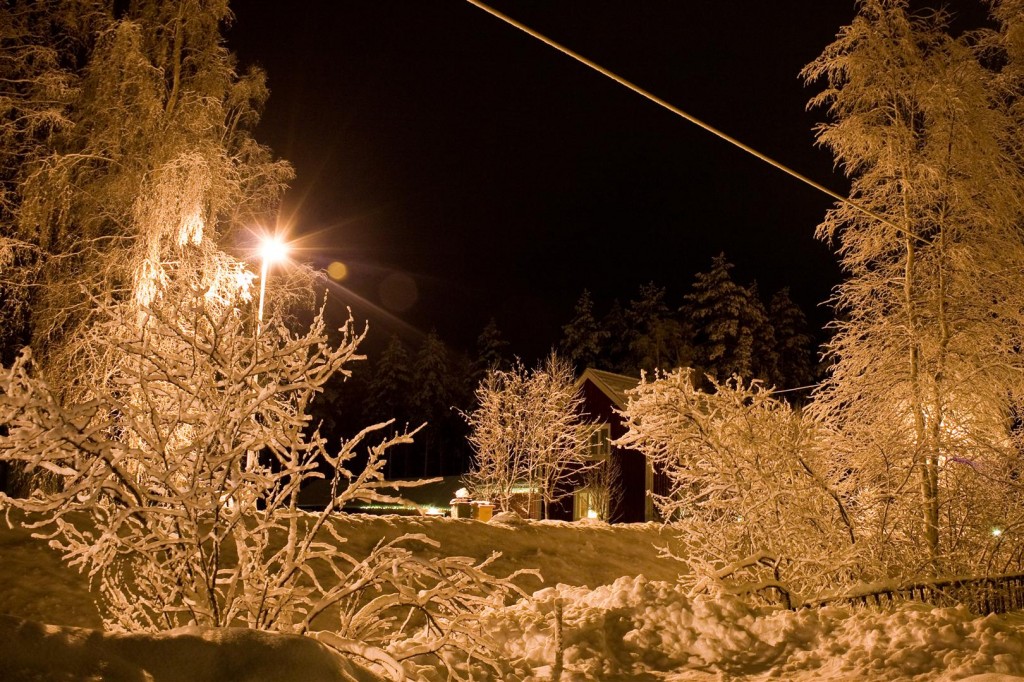 What would a Swedish-vacation-related post be without something equally Swedish to offer as a giveaway? Well – I have two wonderfully cute little things up for grabs here. The second one will be announced in a later post but for today, I’m offering a Dalahäst to one lucky reader. For many people, a dalahäst (pronounced a bit like “darlahest”) is very typically Swedish:

a traditional carved and painted wooden statuette of a horse originating in the Swedish province of Dalarna. In the old days the Dala horse was mostly used as a toy for children; in modern times it has become a symbol of Dalarna as well as Sweden in general. Several different types of Dala horses are made, with distinguishing features common to the locality of the site where they are produced. One particular style has, however, become much more common and widespread than others. It is stoutly carved and painted bright red with details and a harness in white, green, yellow and blue.

Thanks Wikipedia! So yep – one hand-carved, hand-painted Dalahäst (measuring 5cm back height, ~7.5cm from feet to top of the ears), created by Nils Olsson Hemslöjd AB, one of the main creators of Dalecarlian Horses in Sweden. I like them so much that I already have two – one the same size and one larger one, and as much as this one would love to stay here with his brothers he’s looking forward to going to a new home, so please – only enter the giveaway if you feel like you can give him the love and care he deserves!

It’s easy! All you have to is leave a comment below specifying your desire to enter the giveaway and guess a number, between 1 and 100. If you don’t want to participate, feel free to just leave a comment. Only people who guess a number will be included in the drawing. A number between 1-100 will be randomly generated by random.org at 2200 CEST on Tuesday 17th January 2012 and the person who picked that number will win… yay! The winner will be announced in one of my regular posts on Wednesday 18th January, posted at 0800 CEST. In case no-one picked the winning number, then the winner will be the person who picked the number numerically closest. In case two or more people pick the same winning number then they will be entered into a draw and I’ll pull their name out of a hat! Good luck, and I hope you like the little guy as much as I do! The giveaway is open to everyone, regardless of where they live in the world! 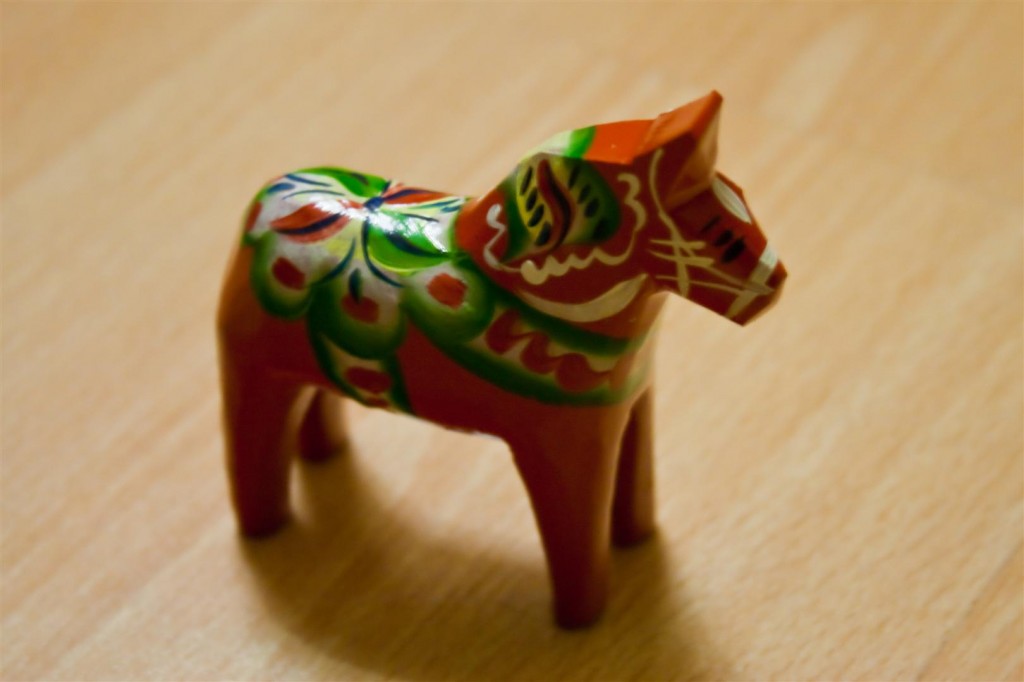 Last but not least, if you’re still with me and not falling asleep from this giant post today, I’m posting a recipe for knäckebröd – of sorts. Traditionally, the crisp, long-lasting but very cheap and healthy Swedish bread is made with rye flour. This is an altogether different take on it. Crispy and delicious these go wonderfully with cheese or butter, or even just munched on their own – it’s almost like a healthy potato chip! I hope this recipe doesn’t get lost in the rest of today’s post fun, because I would really recommend you giving these a try! They’re perfect as well if you know anyone who has gluten intolerance, but just remember that although none of the ingredients have gluten, cross-contamination of oats and seeds in production is common. As a result, following tests done on major brands of oats, many were found to contain amounts of gluten from flour which had found its way into the oats during packaging since they’re often processed in the same sorts of environment.

Enjoy everyone and have a great day! 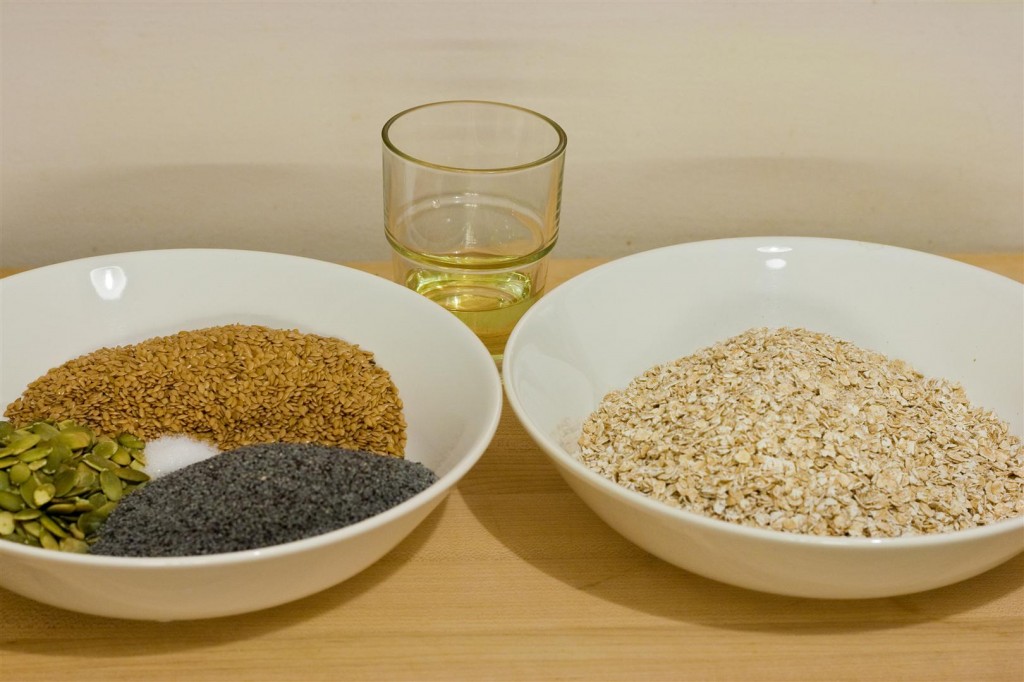 Note: you can use different seeds – These are the types I had on hand, but you can also add in some sunflower and/or sesame seeds, and just adjust the different quantities accordingly!