You are here: Home / Archives for Soy Sauce

Hi everyone, how’s your weekend been? Not just the weekend, the whole week? May is always an enjoyable month in France. We’re blessed with not one, not two, but three public holidays in very quick succession. The first was May the 1st and the next two fall next week on the 8th and 9th. Glorious days off with nothing to do but enjoy the rapidly improving weather. The blossoms are out on the trees and as per usual at this time of year I really start to understand just why cherry blossom season is such a big deal in Japan. The beautiful trees with their cloud-like puffs of delicate pink and white flowers are wonderful to see and walk amongst.

As I write, I’m lying on my bed with my son next to me… it’s his bed-time but he’s really not in the mood to sleep right now and is doing everything to avoid falling asleep. Right now he’s screeching some strange tune and smacking the pillow… perhaps he has a future as a DJ? I think the little guy is having teething pain though. I noticed yet two more teeth forcing their way through his gums earlier. That will bring the total to seven. Not bad, considering some babies still don’t have any teeth by this age.

As promised in my previous post, here’s the gravy recipe which I used for the Baked Eggs ‘n’ Gravy dish. It’s completely vegetarian and has a rich, complex flavour thanks to the nutritional yeast (which is apparently called “nooch” in the US?!). If you’ve never tried it before then I don’t know quite how to describe it. It has a rich, nutty, salty flavour and is a perfect flavour enhancer in a wide range of dishes. 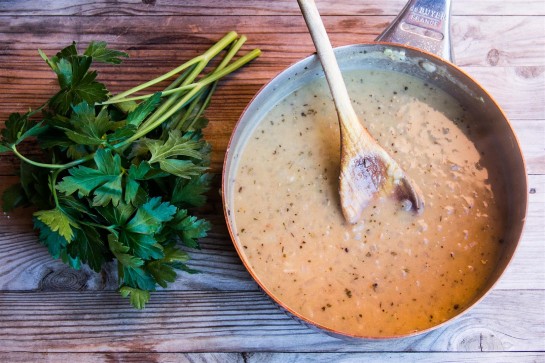 If you’re after a smooth gravy then you should blend or strain the sauce after you’ve finished cooking it. It’s very quick to make and almost meaty in flavour, making it a great substitute for meat-based gravies at the dinner table. I hope you get a chance to give it a try – I’ll be back in a few days with something baked, but until then, enjoy the rest of your weekend! 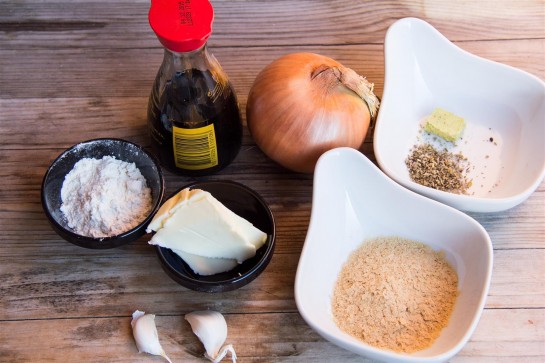 Hi there everyone – just when I thought my guest posts were over and that I’d have to start struggling to get busy in the kitchen with a baby strapped snugly to my chest I have not one, but two wonderfully kind people writing to me asking if it’s still possible for them to do a guest post too. Up first today is Angela, who some of may know as the “Squishy Monster”. Actually I forgot to ask her how she came up with that name – maybe she’ll be kind enough to let us know! 😀

I’ve been following her blog for quite some months now and strongly recommend it to those who aren’t familiar with it. She makes a lot of videos of her recipes – seriously, I thought I was doing ok with ~60 uploads, but she’s well above 100 by now. Thanks to her bubbly, friendly on-screen presence, each video is a real joy to watch so really, go go – check it out :).

Thanks for this delicious, and fascinating, looking post today Angela – you’ve given this tired daddy that extra bit of valuable time which I can spend with my new family and not have to worry so much about finding something to prepare in the kitchen!

My name is Angela and my friends call me The Squishy Monster.  I’m a first generation Korean American and my food reflects this about me.  I like to showcase my food, whether it be baking or fresh Kimchi on my blog and cooking channel.  There you’ll discover that it’s all about “Cupcakes to Traditional Korean Food and Everything in Between!

There’s something about the farm to table approach that makes food taste that much better.  Maybe it’s that you’re able to really appreciate where it all comes from, maybe it’s the old adage of working for what you eat, maybe it’s all in the fun of gathering what’s good to eat to share and enjoy…maybe it’s a lot of things but Pops has always been into growing his own food since it was practically necessary in Korea where it was just as commonplace to grow your own food in the backyard as it was to duck into a chain market to pick up a sack of greens. 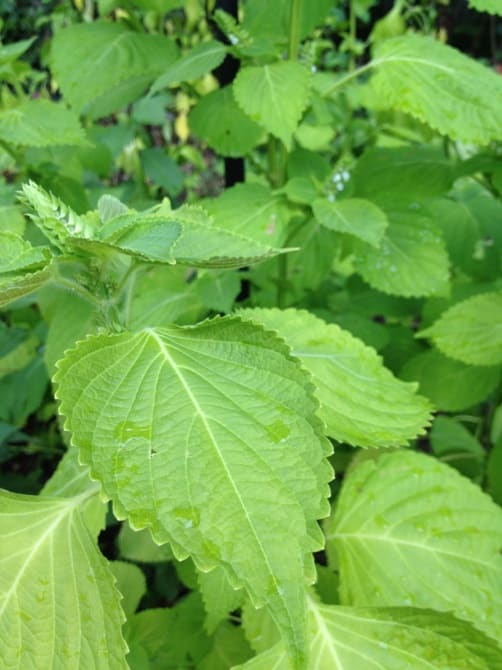 These are Daddy’s bright, emerald Perilla leaves that grow in abundance in our backyard.

Perilla (Sesame) leaves are very popular in Korean cuisine.  They are an herb from the Mint family and to me, they have a very strong taste (chock full of essential oils) and remind me of a cross between Mint/Basil and Anise/Licorice.  They intensify in flavor when crushed (Mama likes them in savory Korean Pancakes and prefers them as “Ggaennip Kimchi”).  Daddy likes them dipped in batter and deep fried (yum)!  Perilla leaves are also high in Vitamin C and Calcium.

I gathered 2 dozen of these pungent tear drop leaves to make “Ggaennip Kimchi.”  Make sure you rinse these well after plucking them and drain in a colander as you whisk together your “sauce/marinade.” 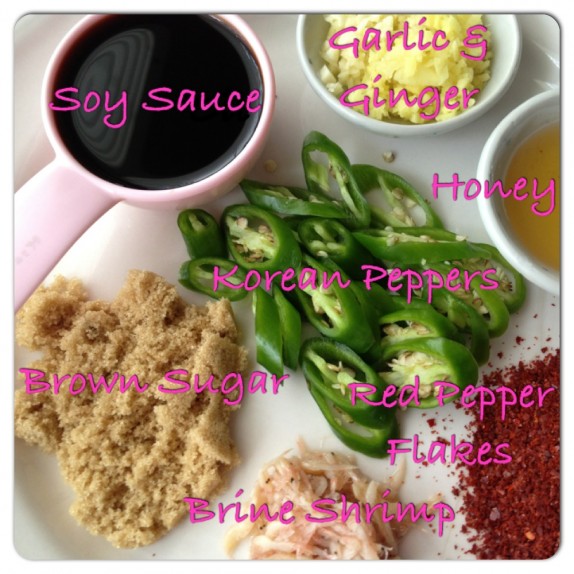 Hi again everyone, I hope you’ve been enjoying the guest posts from Eva, Helene and Sissi so far. Today I have another wonderful post from Nami, over at Just One Cookbook. I’m honoured to have Nami’s beautiful recipe and photographs here. The amount of effort she puts into her posts and presentation is enormous and the dishes she posts never cease to entice and amaze me. In addition to her wonderful food she recently took a trip back to her home country, Japan, and posted some great photos of her trip! I’m sure many of my readers will be familiar with Nami, but in case you’re not, do go and check out her wonderful site.

Nami concentrates on, as she says below, “quick and easy Japanese home cooking” and you’ll always be able to get some great ideas from her. Over the months that I’ve been reading Nami’s blog I’ve learnt techniques, tips and ingredients which not only I’ve never tried before, but some of them I’d never heard of – maybe I’ve been living under a rock, but I’d never heard of matcha until I started reading Nami’s site. 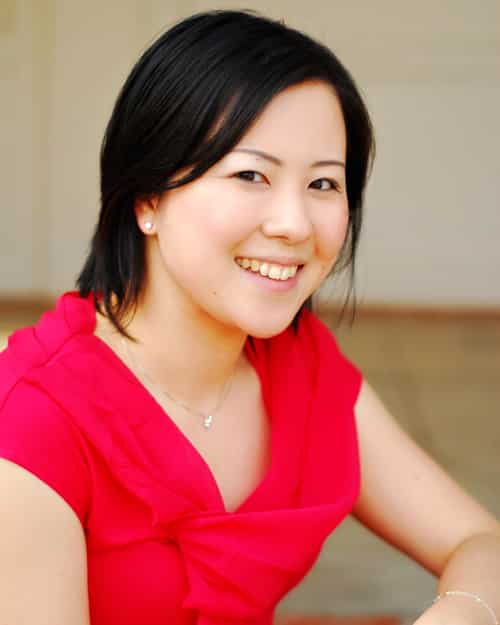 I hope you enjoy the beautiful post today, I’ll be back in a few days with an announcement, and then after that another great guest post! Thanks everyone!

Greetings everyone!  My name is Nami and I share quick and easy Japanese home cooking at my blog, Just One Cookbook.  I’m here today to blog sit FiveEuroFood while Charles is busy with his commitments away from his site.  I’m honored to be here and share my recipe with you, and I hope you will enjoy my post.

I prepared a very refreshing salad using Japanese radish called daikon.  Daikon is a mild flavored, very large, white radish, and it’s often used as garnishing of sashimi or grated and served with agedashi tofu or tempura.  For this salad, I shredded daikon into long thin strips so that it gives a nice crunchy texture while you eat.  Daikon is widely available at Asian markets and sometimes even in Western supermarkets in the US.  To pick a good daikon, just make sure the inside looks juicy and not dry.  If you are also able to get organic daikon, I highly recommend it since the flavor is much better than conventional ones.

As for the salad dressing, I used my favorite dressing base – ponzu sesame vinaigrette, and this time I added umeboshi.  Umeboshi are salted pickled Japanese ume (plums).  They are a common ingredient for onigiri (rice ball) and you might have also seen a single umeboshi placed in the center of the rice inside a bento (Japanese lunchbox).  The salty sour flavor from umeboshi adds a nice kick to the dressing.  If you cannot find umeboshi, don’t worry, you can still use this ponzu sesame vinaigrette for the recipe.  Ponzu is a citrus-based soy sauce and it’s used as a dip for Shabu Shabu and sashimi, or used as a dressing.

I hope you enjoy this post and will give this salad a try one day.  Thank you Charles for allowing me to share my recipe with your readers.  Now let’s start cooking! 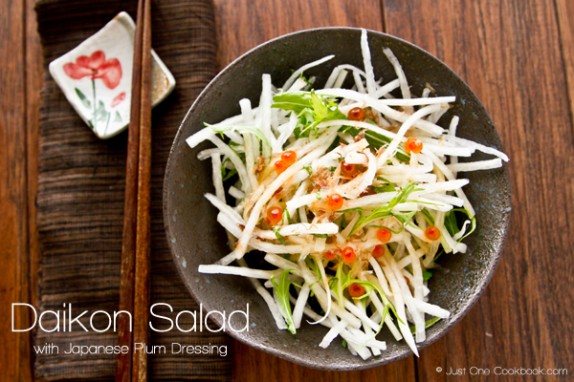 For the Daikon Salad

For the Japanese Plum Dressing 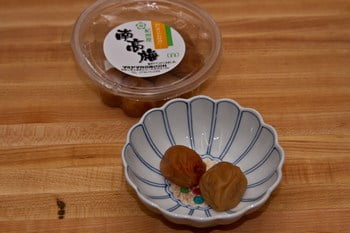 [dropcap style=”font-size: 60px; color: #0B0B61;”]In an earlier post I mentioned having an awesome dinner planned and so now that the quinces are out of the way it’s about time we resume “normal service”, and what better way to do that than with a really darn tasty main course. Preparation time on this is usually very short and it’s a whole barrel of fun because you cook it at the table in front of everyone. Price-wise, it can vary a lot. I went for quite traditional ingredients, bought from a local Japanese supermarket, however the ingredients are far from being “set in stone”. The most important things you need are the stock, some type of meat/fish/tofu, and vegetables. The beauty of this dish is that you can swap out everything. Don’t have shiitake mushrooms? Replace them with portobellos. Don’t have beef? Replace it with pork. This enables you to really have this as both a gourmet treat, as well as a much more simple, cheap meal should you so wish.

You will, unfortunately, need a suitable cooking pot. When I was in Japan, it was quite common for people to have a little gas burner, much like this, which they place on their table. It’s powered by a small gas canister which clips into the side and the iron pot sits on the burner on top. I don’t have this, although I do have a large pot which sits atop an electric element. It has a temperature control and can sit on the table, plugged into the wall nearby. It’s a little larger than a sukiyaki pot, so things tend to float around a bit more, but the general effect is the same, and much fun is still had! 🙂

So what is Sukiyaki, perhaps you’re wondering? Well, Wikipedia to the rescue:

Sukiyaki is a Japanese dish in the hot pot style.

It consists of meat (usually thinly sliced beef) which is slowly cooked or simmered at the table, alongside vegetables and other ingredients, in a shallow iron pot in a mixture of soy sauce, sugar, and mirin. Before being eaten, the ingredients are usually dipped in a small bowl of raw, beaten eggs.

Generally sukiyaki is a winter dish and it is commonly found at bonenkai, Japanese year-end parties.

There are a great number of homemade stock recipes around the internet. People put all sorts of stuff in them, including chicken stock (???). You can buy bottles of sauce directly, both ready to use and concentrated, or you can easily make it yourself. The stock is basically soy sauce, sugar and sake (this was even confirmed by the Japanese people working in the store in Paris, so take that, crazy chicken stock adding people!). I’d really recommend you try to eat this once at least – you won’t regret it! 🙂 This can be varied a lot. I like a stock which isn’t quite so sweet, so I add a little less sugar. You’ll need enough stock to cover the inside of whichever pot you end up using well – about 3-4 cms deep, so make up the recipe accordingly below:

For the main ingredients

As you like, but as an example, I will write out what I have above (for 4 people)

After eating some relatively unspiced food recently I felt in the mood for a bit of a kick. Strong flavours, herbs, and nothing does this better than coriander, mango and red chillies. Give this a try and see what you think!