Salutations! I mentioned posting something Swedish in my last post and so here we are today. Now, this isn’t going to be for everyone, and when you see the ingredients there are those who may even look down on this humble meal but please don’t misunderstand the dish. There are no delusions of grandeur here. This doesn’t masquerade as a fancy dish, or even a particularly healthy one, or, for that matter even a difficult one. The whole dish can be whipped up in around ten minutes. It’s warming, comforting and darn tasty, as well and being cheap and easy, and a favourite of kids and adults (but mainly kids) all over Sweden.

Traditionally the dish is made with with a sausage called Falukorv; a large, traditional Swedish sausage, made of a mixture of grated pork and beef with potato starch and mild spices. This sausage used to be available from IKEA, but then they went crazy and made the terrible decision to only sell their own brand of products in their food stores and as a result a replacement had to be found.

I found that, while not exactly the same, there’s a large sausage in France called a cervelas which serves the purpose wonderfully. Apparently cervelas translates in English to cervelat, a Swiss sausage, although in the pictures on the Wikipedia page the Swiss cervelats seem significantly smaller than the ones sold in France. If you’re not a fan of the processed meat sausages then you can equally add other varieties of sausage. The cream in the recipe can be substituted for a cream and milk blend if you wanted to make the dish a little healthier as well, and you can even use all tomato concentrate instead of ketchup and concentrate together. At the very least, I would recommend a good home-made ketchup, such as this wonderful sounding one, which Sissi at WithAGlass.com posted some weeks ago.

The dish is commonly served with rice (brown rice if you want to up the health value of it a little), but you can equally serve it with pasta or even boiled or mashed potatoes. 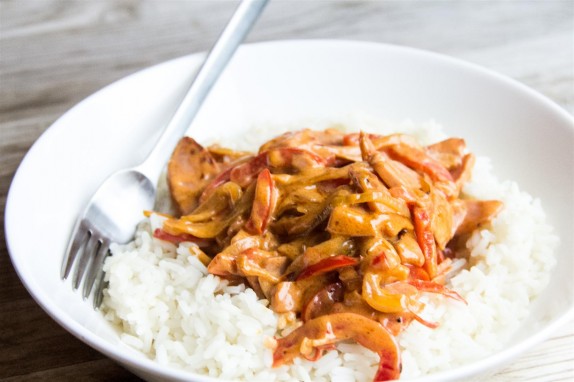 In my next post I’ll be writing about something oh, so delicious. Oh, so unhealthy, but so good. You’ll have to wait and see what that is and then after that I decided it’s time to make something sweet. It’s been a very long time since I made any kind of cake or cookie so I’ll set to work on something like that soon. 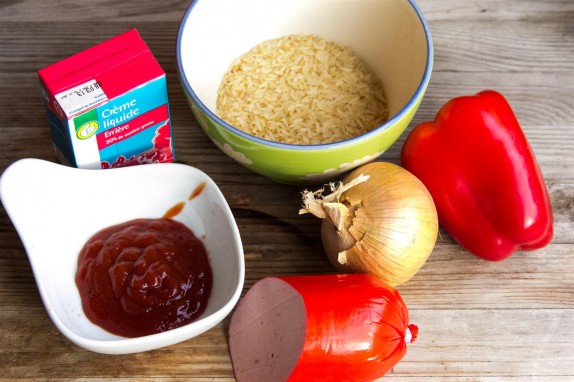