Yes, I am horribly late to the party, and I realise that these have been done a million ways before, up, down, and sideways, but I have a good excuse! I never once saw kale when I was living in France. After visiting a myriad markets, stores, and supermarkets I just gave up and assumed that, much like such things as raw beetroot, kale would be one of those things that would “eventually” turn up. Give it a few more years and I’m sure it’ll be everywhere, but sadly this didn’t happen during my time there. Living now in a country where kale supply is no problem at all is a real pleasure, so I’ll be playing catch-up for a bit while I experiment with this wonderful, curly, leafy vegetable.

I had my misgivings about kale chips, I must say. So many people rave about them. Final verdict? Well… I won’t be turning in my occasional pack of potato chips any time soon, but these were a perfectly pleasant alternative. Very light, guilt-free, and actually “crispy” to boot. That one was a nice surprise! You know that “crack” you get when you bite into a potato chip? You bite into a kale chip and you get the same noise, so you can sit on the couch, munch on these, annoy everyone else in the room, but not feel quite so bad about filling your face!

I made two batches and experimented a little with baking times. I found that you have to be quite attentive to how they’re crisping up in the oven. A minute or two too long and they’ll start to get a bit darker. Unfortunately, unlike slightly browned potato chips, browned kale chips aren’t that hot. The slightly bitter taste of the kale which is so pleasing when it’s raw or steamed is amplified somewhat and  they’re do become a little less appealing. If you’re a fan of bitter flavours then go nuts, but if you want to enjoy these chips in optimum condition then do keep a watchful eye on the oven. 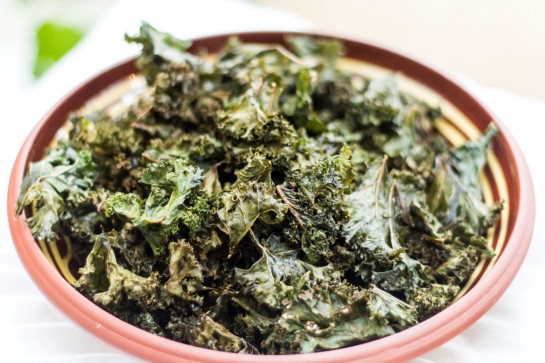 I made a video for this as well – you can check it out below. I hope it will make up for the fact that these aren’t very photogenic. I kind of think it looks like a pile of dried autumn leaves… just without some wonderful orange and red hues!

The weather here has been funky as anything. At one point it was pretty darn cold, snow everywhere, then the temperature shot up to around 7 or 8 and it rained and all the snow vanished. Right now everything is grey and wet and decidedly unfestive, though I’m hoping that will change soon enough. My parents will come to spend Christmas in Sweden this year. It will be wonderful for my son to have the company of both sets of his grandparents, but I’d been hoping I could offer my parents a white Christmas. Of all places, northern Sweden could provide this, I thought, so I’ll be seriously unimpressed if it rains the whole time!

I kept the flavouring simple - plain salt - but these would go really well with a bit of cumin or chilli.