You are here: Home / Recipes / Baking and Snacks / Normandy Pear Pie – or is it?

So, much like my kind-of-sort-of-not-really-Bircher Potatoes, here’s another dish from the annals of my childhood which I’ve forever known as “Normandy Pear Pie”. As is often the case for dishes that aren’t that well known, I usually have a quick peek at Google before writing out the post just to make sure I’m getting the name right, if it actually exists, or even just to see if I can find any information about this dish I know so well but others can only give me blank stares when I mention it.

In this case I was pleased (and a little surprised) to see a great many results for “Normandy Pear Pie” (or tart) when I searched, and then equally dismayed when I discovered that pretty much every recipe I could find had absolutely no similarity to “my” pie at all… some of them even having a frangipane filling! Well, I must say that those do sound delicious but please allow me to present this version to you (which apparently isn’t actually a Normandy Pear Pie at all), and anyway – the title is so much more whimsical than “Pear and Walnut Pie”.

The pie is actually one of the best pies I know. Apple is all well and good but it can get a bit boring sometimes. Pears make for an excellent alternative and the flavours that arise as the walnuts heat and mix with the sugar and pear juice is pure magic. Topped off with a sprinkling of cinnamon and you’ve got something that would be a great rival for the ol’ apple pie any day of the week. 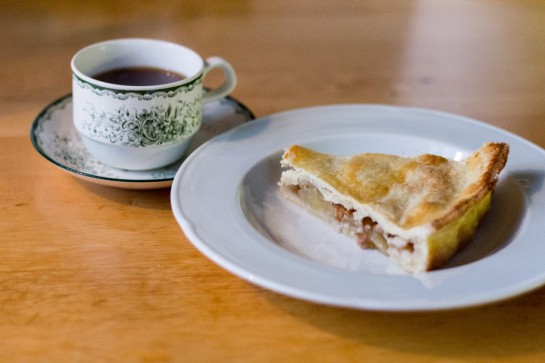 The big freeze has started and I’m now limited to a fairly narrow window of good light each day for taking food photos. If mother nature decides it’s going to be snowy or overcast on that day then that’s it… no chance for photos, so I think I’m going to have to try and find some sort of “daylight” lighting kit. Apologies if there are some yellow-tinged photos for a while until I can figure something out!

On the plus side though – tomorrow is my birthday and we’ve just passed the first Sunday of advent, and so here is a poinsettia covered in glitter to get you in the festive spirit! See you soon folks.

For the pastry400g Plain Flour + a little extra for dusting

For the filling~10 large, ripe Pears, peeled, cored, and sliced

If you don't have baking beans, you can also use dried beans (chickpeas, kidney beans etc). Alternatively, kitchen foil fashioned into the shape of the dish and gently pressed down will also help to support the sides of the pie as it is baked blind.