Hi everyone,  I promised you photos today and I won’t disappoint, but a disclaimer first. The weather yesterday was filthy. Overcast and grey and rain spilling down around us. It was not good photo-taking weather, I can tell you that right now, but I had said I’d show you some and so I diligently stood there under my umbrella trying to snap interesting looking things! Anyway – you have been warned, so now on to the main post!

If you think of Paris and water-ways, I’m guessing most people think of the river Seine – understandably so, since it’s the giant river which runs right through the city, carving it in two, but did you also know that Paris has canals too? Not just one either, but three, as well as a large artificial lake. The Canal Saint-Denis, Canal de l’Ourcq, Canal Saint-Martin and Bassin de la Villette accordingly. Construction of these canals was ordered by Napoléon Bonaparte in 1802 with the goals of creating both improved shipping routes and a better method of providing fresh water to Paris to cope with the demand from a growing population. The Canal Saint-Martin actually joins up with the Seine in the centre of Paris eventually and these days makes for a pleasant boat-trip. 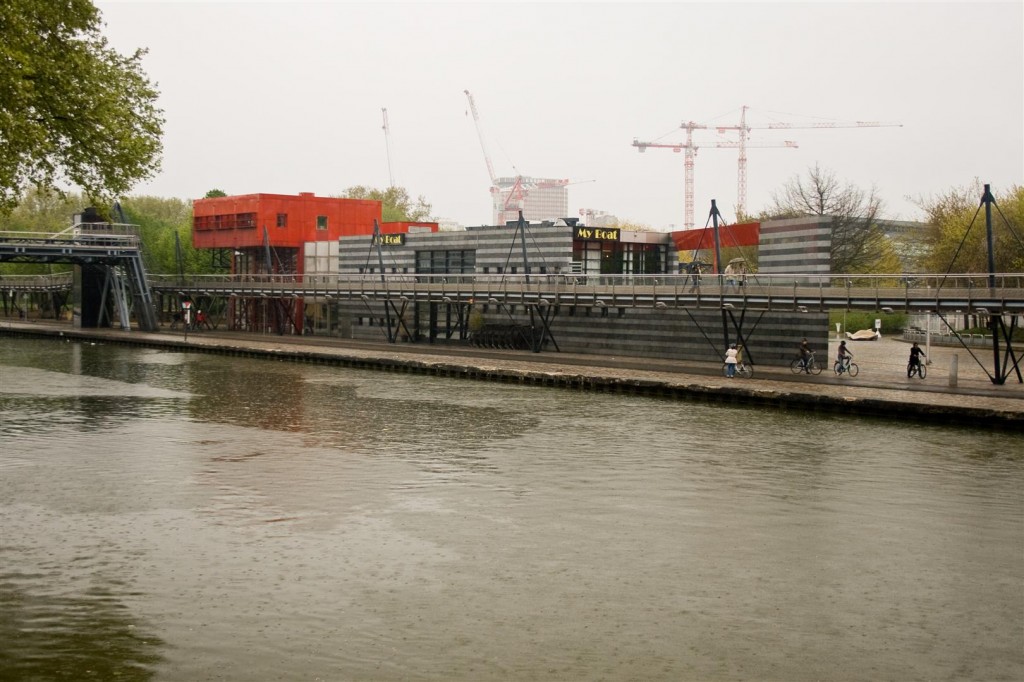 I’ve been on this tour before but it’s a very fun trip and if you find yourself in Paris I would recommend it. You start off in the north-east of Paris, near the Porte de Pantin – famous for the concert halls and exhibition centres in the area. The tour leaves at 14:30 which means we have time for a lunch first at the restaurant by the canal (this part of the canal is the Canal de l’Ourcq) – a restaurant called My Boat, which is actually shapped like a boat and for some reason has Titanic showing on a big TV screen non-stop (it was showing the movie “Titanic” last time I was there too!). Despite the odd choice in lunch-time entertainment the food is excellent however, and hot, which was good because the boat we took on the canal was packed – I’d never seen it so busy before. – and as such, in order to enjoy anything, I had to lurk out on the top deck in the rain and wind! All that did put a bit of a dampener on the trip – I’d advise going on the morning boat, which leaves from outside the Musée d’Orsay (on the river Seine) and goes to here (while this trip does the reverse journey). 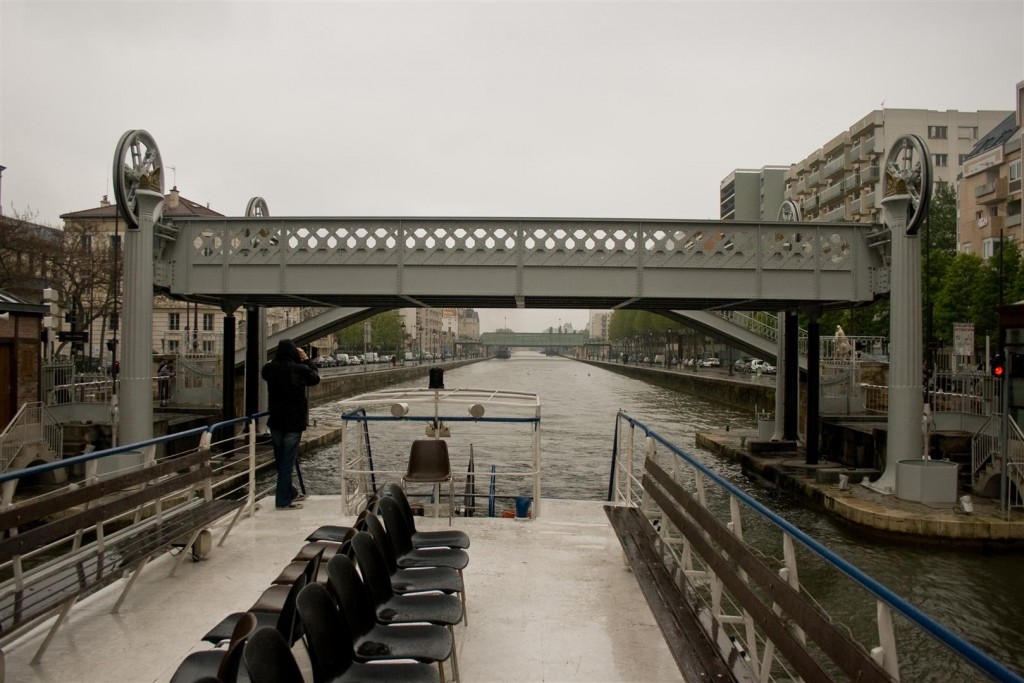 During the trip you go under all manner of tunnels and bridges – ones which swing out, ones which lift – this one, just before the Bassin de la Villette,  lifts entirely up into the air – road and all – to allow the boat to pass underneath. At the end of the “Bassin”, the largest artificial lake in Paris, you join up with the canal Saint-Martin, by going through a double lock. Even though I know these days exactly how they work, I still find locks so cool – the very idea of taking a boat “downhill” (or even uphill) is amazingly clever and you pass through plenty of these locks on your journey, as the final destination – the Seine – is about 27 metres lower than the canals – each lock takes you down about 3 metres and it’s fun to watch the water “disappearing” as the boat sinks down lower and lower. 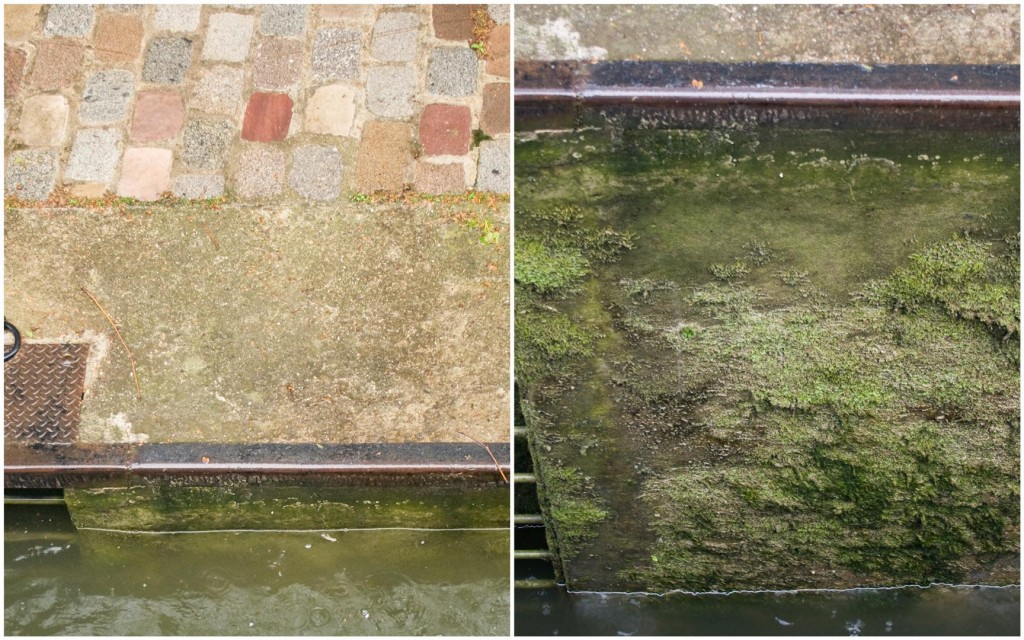 At one point we reach the Canal Saint-Martin’s most famous lock – shown in the 2001 film Amélie (which if you’ve never seen, by the way, you really should!) which also one of the last two locks before you enter the long tunnel which runs under Boulevard Richard Lenoir, all the way out to Place de la Bastille before going through the Port de l’Arsenal, where people park up their rather fancy boats, going through one more lock, and finally entering the river Seine, were you go past the Ile St-Louis, Notre Dame de Paris, the Conciergerie and other landmarks before finally arriving back at the Musée d’Orsay. 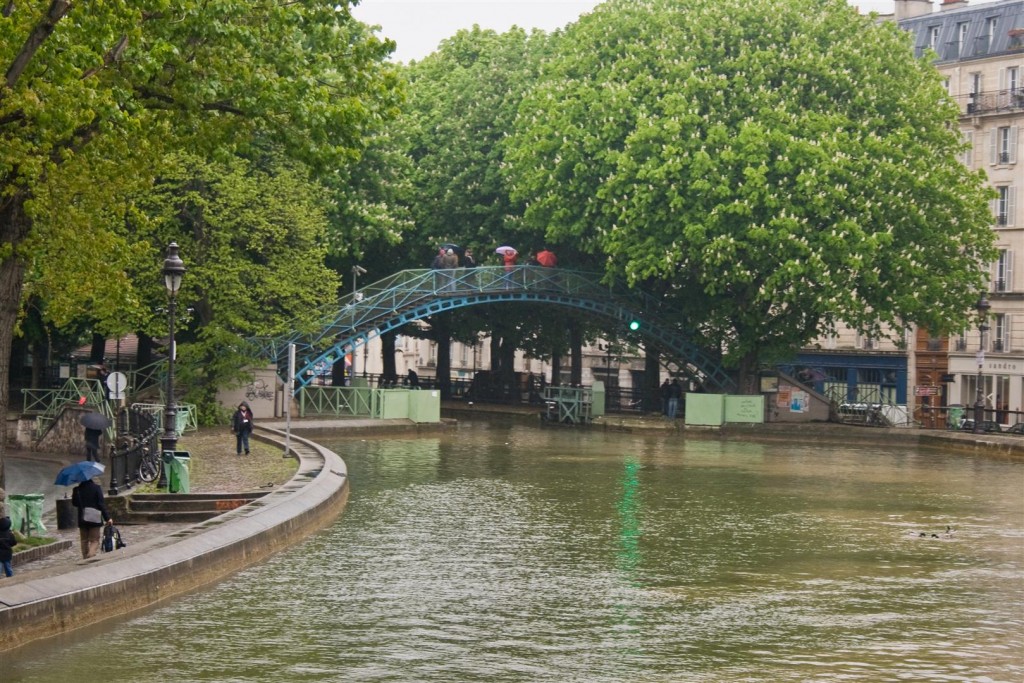 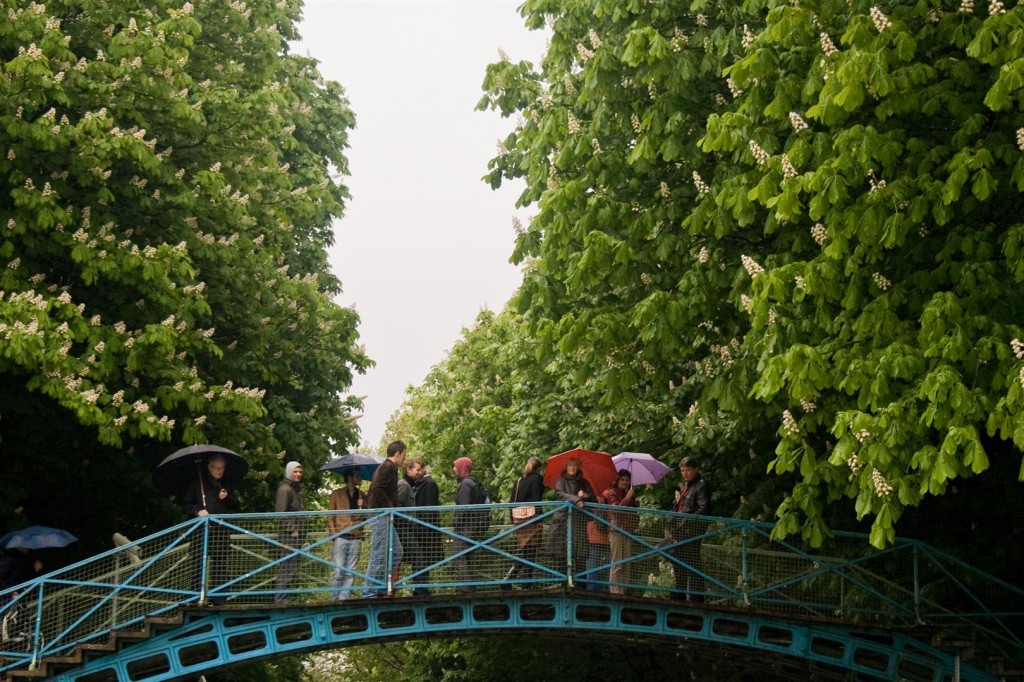 The trip takes 2.5 hours and is reasonably priced at €19 for adults, €12 for children. You get to see a whole lot of places you might never have known existed (like the huge tunnel under Boulevard Richard Lenoir for example) and if the weather is fine it’s a very enjoyable way to spend an afternoon. The trip is narrated in French and English and occasionally you might even get a guide who brings along a clarinet and sits at the front of the boat playing mournful clarinet songs as the boat goes through the long tunnel!

Bonus picture before I wrap up – speaking of locks… its quite the “thing” to do to put a padlock on the bridges in Paris to symbolise your “undying love” between you and your partner. I don’t quite see the attraction myself, but two bridges in particular are particularly targeted for this. The Pont des Arts is (and was) the main destination for lovestruck couples:

Nowadays the bridge has become a hotspot for couples who attach a padlock to the railing and throw the key into the river below.

I’m guessing at some point someone got confused about which bridge they were on, or wanted to start a new trend, because it seems now the Passerelle Solférino next to the Musée d’Orsay is covered with padlocks too… like literally a padlock on every spare bit of iron railing! 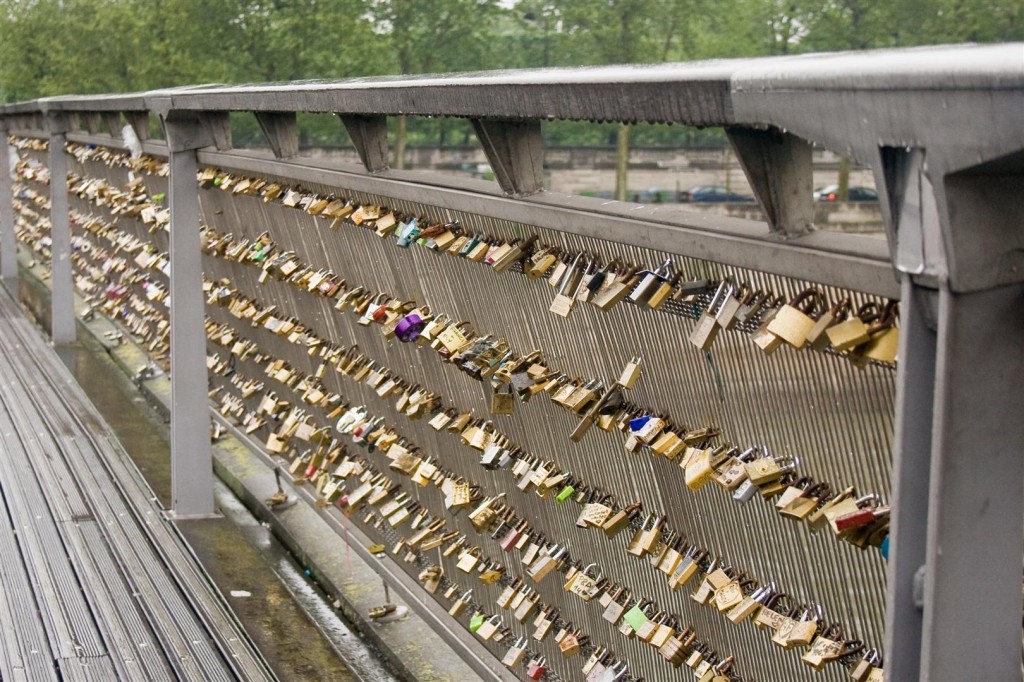 I hope you’re all having a great Sunday – today I’m thanking Jean from Delightful Repast for inspiring me to make tortillas and what better ingredient to use than some of my new flour, but which one? Well, I thought about this for a bit and then decided to go for the quinoa flour. I’ve never used quinoa flour before and wasn’t sure what to expect. My first couple of attempts were not too great. The dough discs were impossible to pick up, kept sticking and tearing. Well, I’ve fixed this now and the result was good. A soft bread with the typical brown marks frmo the pan dotted over the service. If you can imagine the smell of uncooked quinoa – the flavour is identical to this. I found that it could be a touch overpowering, so you’ll need to ensure that you wrap them around something sufficiently strongly flavoured to balance out the taste. 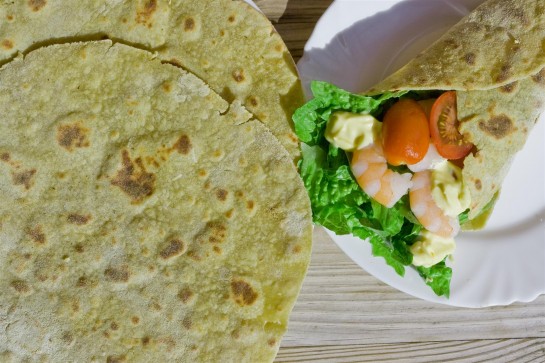 As per my recent cupcakes, these tortillas are gluten-free. Follow my tips of “roll, reform, roll again” carefully in case you encounter any difficulties with the rolling of the dough, and enjoy :). Have a wonderful week – I’ll be back in the week at some point with something new! 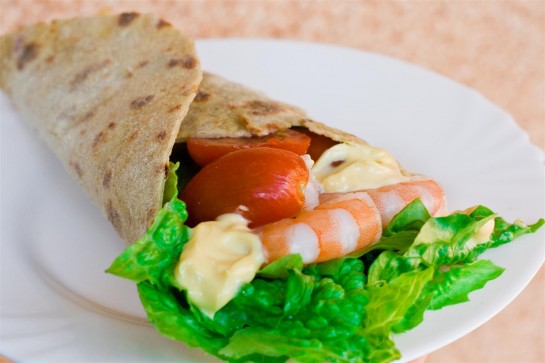 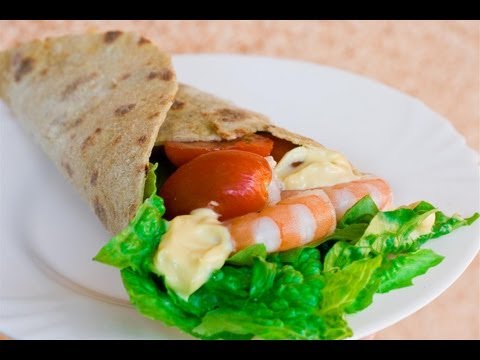