Serves: Makes around 8 – 12 good slices
Cost: ~€4.50 – €6 depending on type of fruit and cream cheese used
Preparation time: ~20 minutes preparation and 50 minutes total cooking
Calories: ~340 calories per slice if divided by 12

Greetings everyone – boy oh boy am I looking forward to this weekend. All sorts of yummy things to make and write up for your viewing pleasure today and tomorrow, including something I’ve promised to make for Ping, from Ping’s Pickings. Sunday evening I’m cooking up a full roast dinner with some more Yorkshire Puddings and a real home-made gravy. I’m going to be making a type of conserve, a type of dessert and a type of “candy” (of sorts), but I’ll keep those under wraps for now in case they turn out to be complete disasters!

Then of course it’s Monday, which is a bank holiday here, so long weekend time. Even though the weather forecast currently says it’s going to rain I’m going to be enjoying my weekend a great deal and I’d like to take this opportunity as well to wish all my readers a happy Easter if you’re celebrating it. I’m not going to post them again, but if you have an hour or so spare, I’d really recommend whipping up some Easter Biscuits or some Hot Cross Buns. The photography is pretty poor, but don’t let that dissuade you – they’re delicious! I’m actually off to whip up some Hot Cross Buns after writing this up! 🙂

As for today’s post though – I owe it all to my wonderful blogger friend over at Chica Andaluza. I’ve had a life-long love affair with cheesecake, but more often than not its the uncooked variety. Hell, I didn’t even know a baked version existed until I started blogging. I’ve since seen a number of baked cheesecake varieties since then but little did I know that the cheesecake bug would hit me quite so suddenly as when I read Chica Andaluza’s Baked Cherry Cheesecake post. Even despite her claiming that she wasn’t happy with the photo and had actually been more focused on the eating rather than the photography, I found the photo immediately spoke to me. I knew I had to finally bake my first cheesecake and what better one to make than the one offered up by Chica? 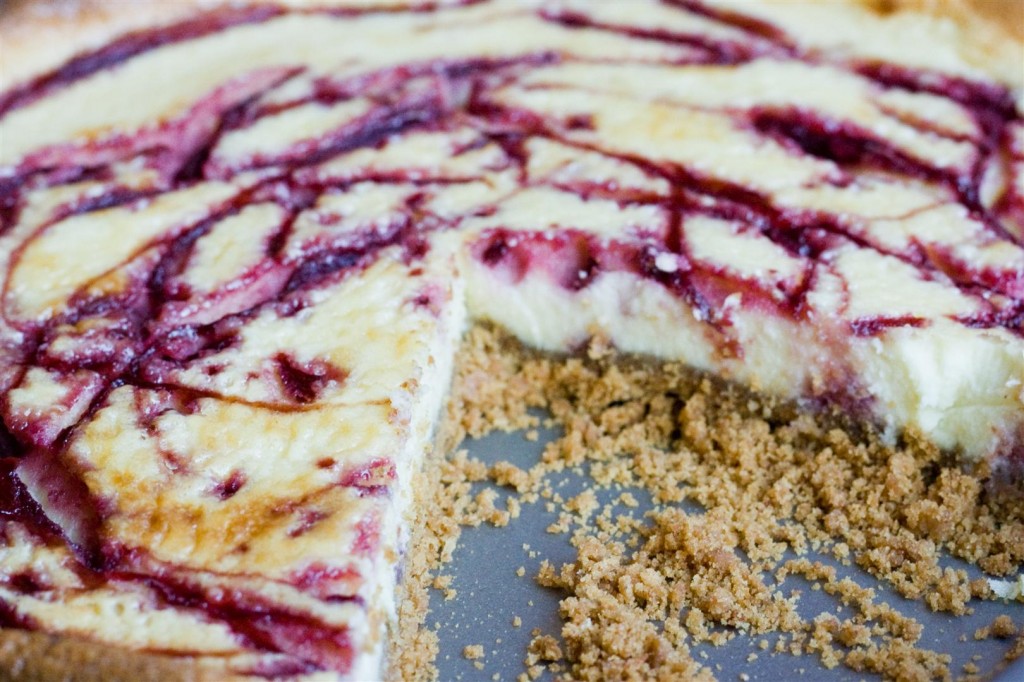 I changed very little about the main recipe itself, but couldn’t find cherries anywhere so opted for raspberries instead. The swirls of coulis throughout the cheese provided beautiful colouring and delicate raspberry flavouring, though the next time I make this I will be adding some crushed fresh berries as well, or a raspberry jelly on the top. I do hope you decide to give it a try – thanks to Chica for her inspiration, and do check out her post too! Have a great day everyone!

For the fruit filling