You are here: Home / Adventures / Ratatouille with Okra, just because!

Autumn is now in full swing. The not entirely great weather of summer has now given way to colder days and rain – oh, so much rain. With the change in weather comes a desire on my side to avoid fancy, delicate dishes and move on to things which are altogether more warming and hearty in nature. What could be more delicious on a cold, rainy day than a delicious bowl of richly flavoured stew – maybe with a generous drizzle of home-made chilli oil as well? The piquant oil goes amazingly with the velvety vegetables and after all, you don’t want it too healthy! You have to lay in those winter fat reserves, right? (Or at least you would have to if you were a polar bear).

Today I’m going to be making ratatouille – a delightful stew, originating from Nice, in France. There are a great many ways in which ratatouille can be prepared – both from the preparation of the original ingredients to how it’s all brought together at the end. Purists maintain that the vegetables should be cooked separately beforehand – as in “aubergine separately”, “courgette separately”, “bell pepper separately” – in order to conserve the individual flavours, but seriously… who has time for that? I opt for the one pot approach, and unlike some people who prefer to cook it all up in the oven, I keep it in a pot and simmer it slowly on the stove. The whole process fills the kitchen with a fantastic aroma and the end product is a delicious plate of glossy, stewed vegetables in a rich sauce which you can store in the refrigerator and eat for days to come. It’s incredibly healthy, being pretty much entirely vegetables, with a splash of oil added, and timed right, seasonally speaking, isn’t too expensive to make at all. Often served with rice or pasta, I personally prefer to dip a great big hunk of baguette inside. Good, hearty, warming food – for me, it doesn’t get much better than this right now. I added okra into this ratatouille, for no particular reason other than a whim. It’s not at all a common ingredient here but I had some in the refrigerator which I wanted to use up so in it went. I did overcook the dish a teensy bit. Compared to my last pan of ratatouille the vegetables significantly lost their structure which made for a much less attractive dish, even though it was just as delicious – if not a little more so, because it was almost creamy in texture because of the soft, delicious aubergine. 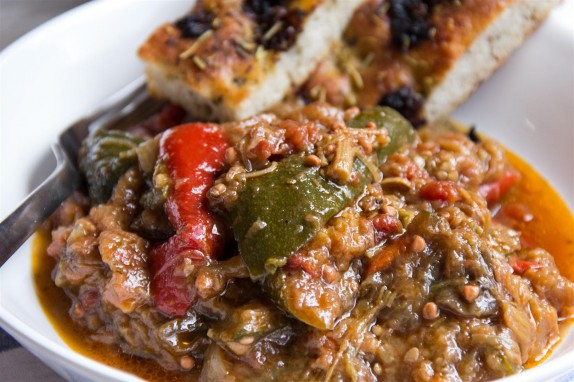 Before I get moving on that though, I thought you’d like to see some photos. On what seems to be a rare fine day these days, we went for a walk in Versailles on Sunday. Specifically to the Pièce d’Eau des Suisses. The second largest water feature at Versailles, with a surface area of 15 hectares, and named after the Swiss Guard who constructed the lake in 1678. 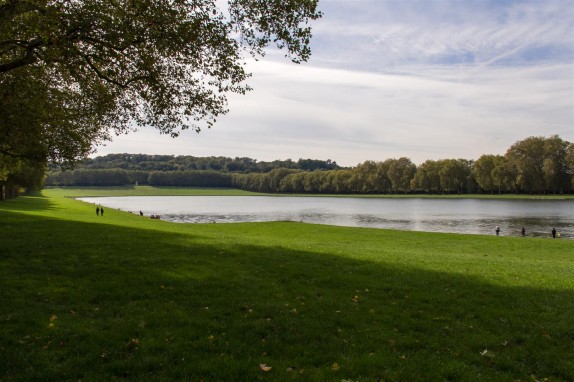 The lake is surrounded by long straight avenues of trees and is home to a number of swans and ducks – and also some seagulls, when there’s food to be had. There were a few families out with picnics, making the most of probably one of the last clement days of the year and so the birds of various species were out in full scavenging force. 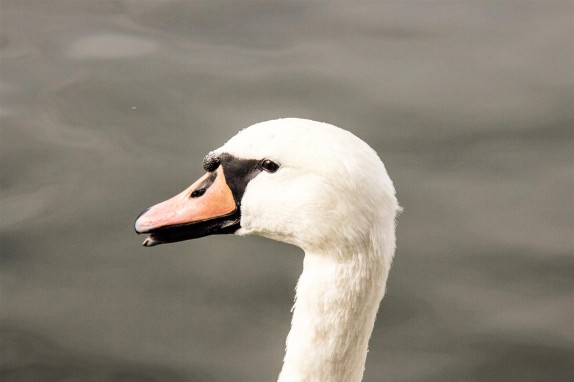 The area with the lake is actually right across the road from the main château grounds. Looking North you can see the huge flight of stone steps which lead up to the Parterre d’Eau, another small water feature behind the château itself. 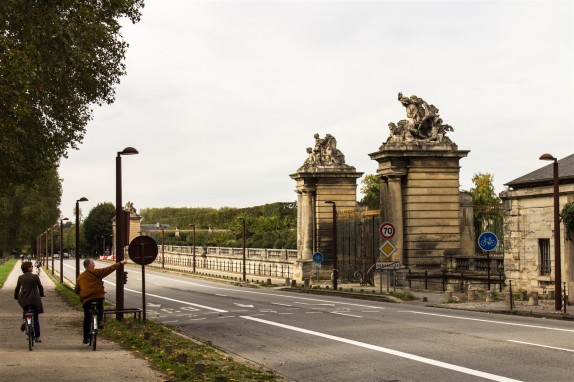 Walking around the lake is all well and good but after a while you kind of want to sit down – especially when carting a baby around in a sling – and I kid you not… there was not even one bench around the whole lake so we decided to call it a day and started wandering back to the car. Suddenly though – snack attack! I guess the walk worked up a bit of an appetite in us because we had a real urge to eat croissants, or cookies, or both! The hunt was on for a purveyor of pastries! 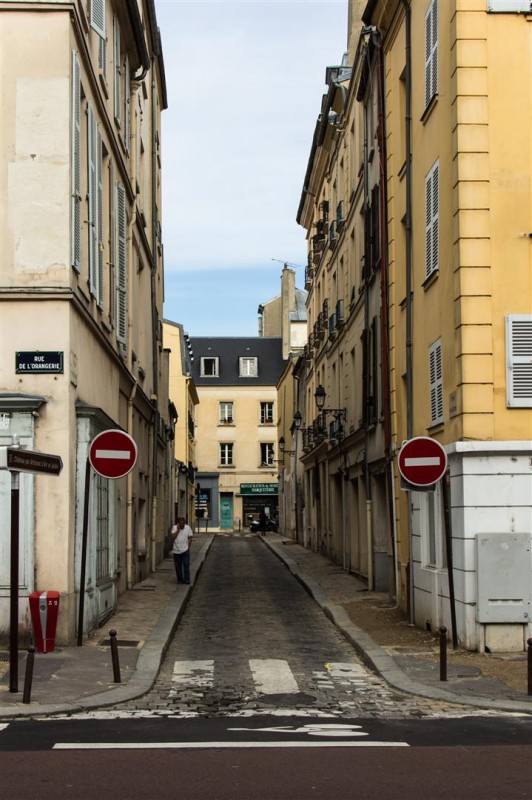 Finally we found a bakery and went a bit nuts. We bought a croissant, some chouquettes and a cookie whose name escapes me now, but it’s basically two giant shortbread cookies, liberally dusted with icing sugar, and sandwiched together with raspberry jam. Yum! I saved my cookie until I got home and could enjoy it with a nice cup of coffee! Clutching our bags of assorted baked goods we headed to the car and saw a couple who must have recently been married, taking some photos of themselves decked out in their wedding suit and dress. 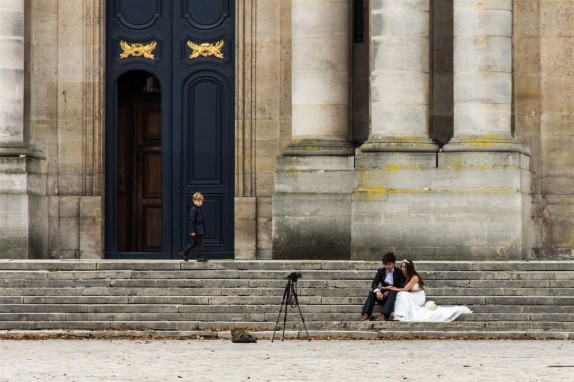 Everyone say “aww”! Safely back at home though, I got to finally enjoy the thing I’d been looking forward too – my cookie – and very nice it was too, enjoying it on the balcony, at least until it started raining outside! Have a great day everyone – I hope you liked the photos and let me know if you have a chance to try the ratatouille! 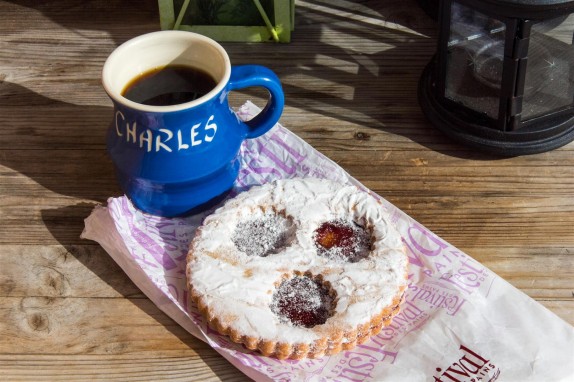 I make a large quantity at once, but feel free to scale down as you prefer. 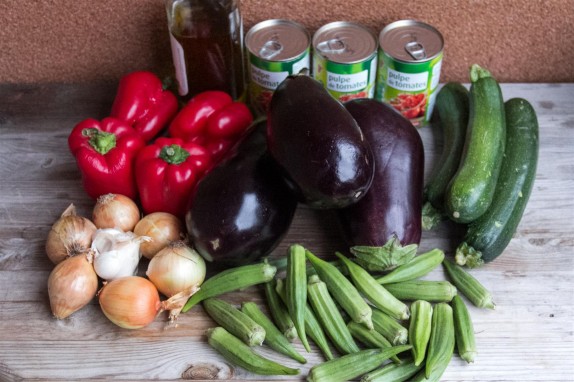