So, for those of you who read my blog all those years ago back in 2011 (that’s just Kristy and Greg, ha!) perhaps you might remember the first time I made a roasted red pepper and feta dip? Behold the horror… I’m not even going to post a picture here in case anyone gets completely turned off the recipe, so you’re going to have to check it out yourself if you’re brave enough. Suffice to say, it looked pretty vile – as in, “not even a little bit appetizing”. Of course, I still have far to go with my food photography and I don’t really have the space to be getting overly artsy with my photos at the moment but I’d like to think that hopefully this looks better… at least like something one could imagine eating. I’ve definitely learned that taking a photo at 11pm does not a good photo make!

So what do you think? Would you eat a roasted red pepper and feta dip? I loved it personally. I don’t think it could quite trump the artichoke and coriander offering from my dip extravaganza but it was a great dip nevertheless. My wife wasn’t a big fan… she said it was a bit on the sweet side (I guess she’s sweet enough (ha), but then what does that make me? Bitter?). Well worth a remake in my opinion. Of course, I won’t be able to make it as frugally as I could in France; I used to be able to buy an enormous sack of about fifteen red peppers for about €2. Here you’ll pay the equivalent of about €1 for one.

I’m on Easter vacation – yay! The joys of being a student again. I can’t wait for summer for that very reason. I’ve posted a few Easter-related recipes here before but – again – they were a while ago and the photos are predominantly dreadful so doing a little re-make might be a good idea. At the very least, hiding the shameful photos and swapping them out for better ones is a good idea.

Horror of horrors, it has dawned on me that Sweden doesn’t really “do” chocolate eggs. You can get little ones, and those Lindt gold bunnies but I’m used to having a great big hollow chocolate egg which you can crack in two and devour like some sort of choco-maniac. You want to know what else is… just plain bizarre? I saw a load of display cases in the store selling little kiddy-sized broomsticks and witch hats.

“No, that’s for the Easter witches of course!”, she replied.

Easter… witches? Then I remembered that we had indeed talked of this before, but it’s no wonder it didn’t stick because it just seems so weird that kids dress up as witches and wizards at… Easter… and presumably go door-to-door, soliciting candy.

So I wonder what does one do at Hallowe’en here? Dress up as a chick or a bunny and go on chocolate pumpkin hunts? 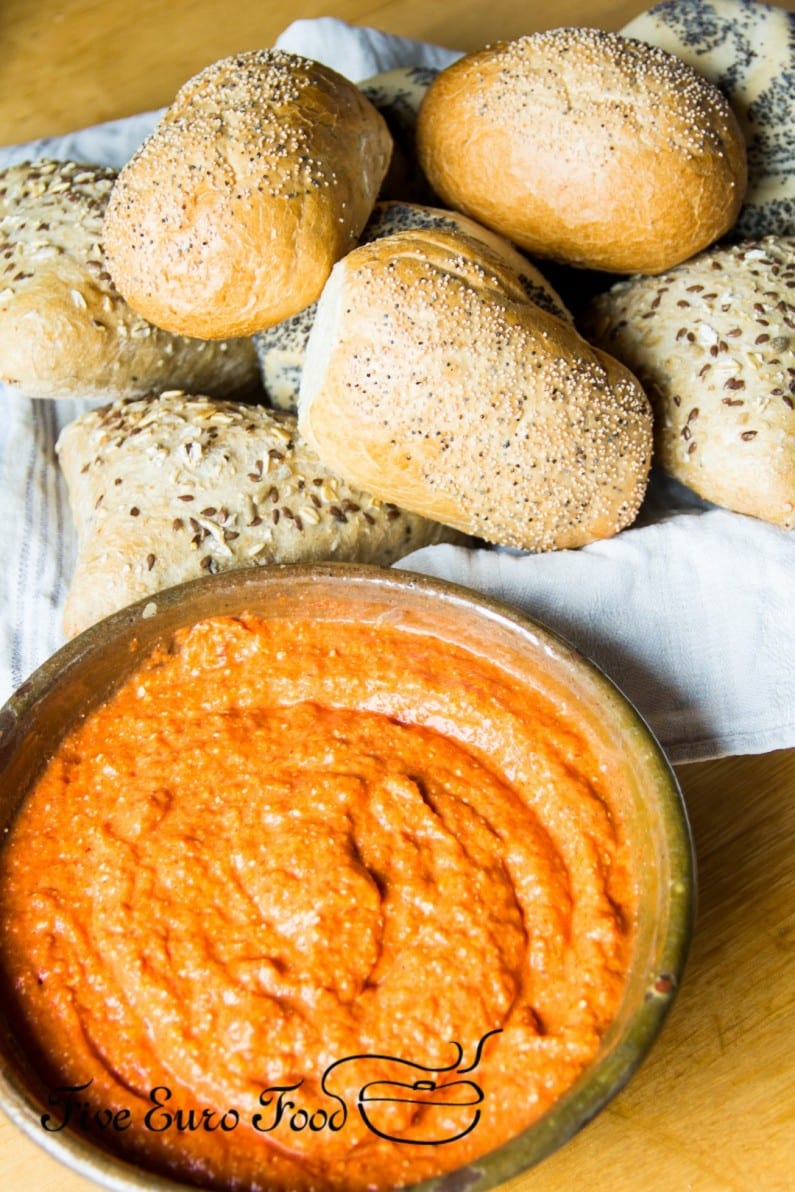 A smooth, creamy dip with the sweetness of roasted peppers, balanced with the saltiness of a generous quantity of crumbled feta.

If you like you can save the liquid you get when straining the blended peppers and use it to flavour a pasta sauce or something similar.