Hi everyone, I hope you’re having a great Friday. I’ve been busy in the kitchen this week – kneading up 3kgs of bread dough. I baked up a loaf and then split the rest into individual bags so I now have 8 loaf-sized bags of bread dough in my freezer – all ready to defrost, prove and bake. It’s a good feeling to know I have a month’s worth of bread in the freezer, and the finished product was very good too. For something which took maybe 40 minutes to make, I’d say I’m pretty pleased with the result!

Do you remember my post from the other day about the abbey? My wife and I were bored the other night so we decided to go for a drive around midnight (yeah, we’re weird like that). I love driving at night – especially in summer. You can wind the window down and take great gulps of the cool night air. There are hardly any other cars on the road and nobody is out walking. You can take it easy. No stress! You can even slow down when going past turnings to crane your neck to see if the road looks interesting, and make a decision about whether or not you want to go down there. There’s no other cars behind you riding up your bumper, honking at you to move the hell out of the way. Countryside night driving is a luxury. Anyway, after visiting a little village called “Milon-la-Chapelle” for no other reason than the fact that it looked quaint I pulled out onto another road and drove past a turning with a signpost denoting the presence of the “original site of the Abbey of Port-Royal-des-Champs”. I had no idea it was accessed by a separate road. There it was though, and a little peek on Google Maps when I got back showed that sure enough, you can see the newer museum, and just south are the grounds with the ruins. Methinks I’ll be making a trip out there soon – in daytime this time though! 🙂 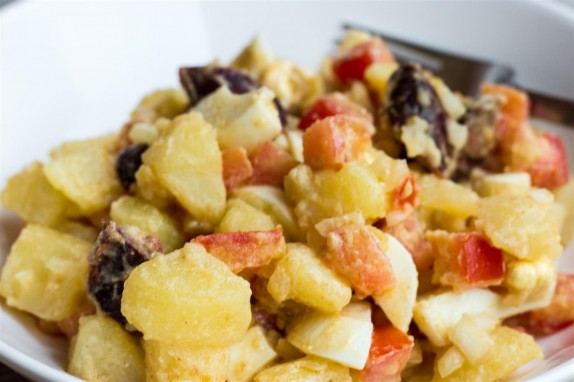 On to today’s recipe, you might be wondering what on earth it is! It is in fact a potato salad (ha!) but it’s inspired by a Tunisian recipe which was given to me, and so I decided that I may as well give it a fitting name, since I already have a potato salad recipe on my site, and I wouldn’t want to get all confusing now. The original recipe calls only for potato, onion, cumin and olive oil. I tried that and it was fantastic, but I wanted to pad it out a bit – give it a bit more texture, a bit more bite, so I’ve added a few extra things here. I was actually planning on posting this anyway today, but I find the timing rather funny. It happened to coincide with Sawsan’s delightful post on potato salads from not long ago, here. I’ll definitely be trying out her recipe she posted for Cajun Potato Salad soon – in the meantime though, this makes a wonderful meal or accompaniment, and a great alternative to the mayonnaise-drenched dish many people envisage when they think of potato salad. Try it with a twist of lemon juice as well for a bit of extra zing!

Have a great day one and all – enjoy the dish, and your weekend and I’ll be back next week! 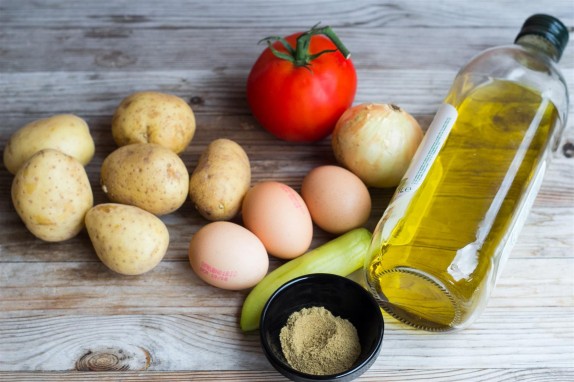