You are here: Home / Adventures / Spiced Plum Tart and some photos from… Stockholm

Hi everyone! I’ve been rather busy this week and didn’t have a chance to make the things I wanted to make so as a result I’ll be posting something which I made some time ago but never got around to posting (mainly because I thought it didn’t look very nice), although the taste was fine. Sorry about the slightly less than exciting recipe, which is rather out of season now too (at least for those of us in the Northern hemisphere)! I hope I can redeem myself with some photos though. I promised you some photos in my last post… I would have posted them months ago, but my wife told me that it would be weird to post snowy, wintry pictures in the middle of summer, so I decided to wait until now. In February last year I decided it might be rather nice to go for a long weekend to Stockholm. We’ve been through there many times on the way up to the north of Sweden but I’ve barely ever even stepped outside the airport so I figured it was high time I check out the capital.

After reading a few reviews I found a rather pleasant hotel, right on the waterfront in Stockholm’s Gamla Stan, or “Old Town”, and right around the corner from the Royal Palace. This area of Stockholm itself dates back to the 13th century and has a great many very narrow, cobbled streets. While very popular with tourists by day, by night the place is very quiet – especially if you head away from the streets which have restaurants. Once off the beaten track, in the snowy darkness, it’s truly like stepping back in time. At the time we went there were a lot of intermittent snow showers, and at times the wind whipped up the narrow alleys, banking the snow up against the doorways, although you wouldn’t think it by looking at the photo below, with not a speck of snow in sight! 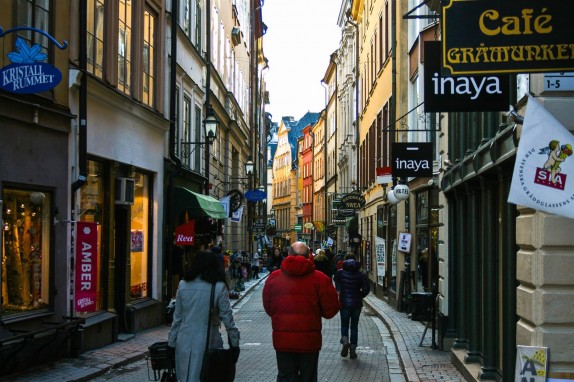 There are a a couple of beautiful churches in Gamla Stan, which sometimes seems surprising, considering how packed together everything is. There’s the Storkyrkan, or “Great Church” and there’s also the Tyska Kyrkan, or “German Church”. I would recommend a visit to both if you’re in the area, but especially the German Church for its fantastically beautiful interior and the vibrantly colourful stained glass windows. 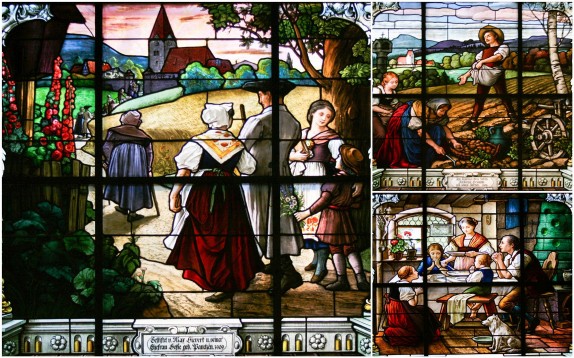 The first night we were there we had a wonderful sukiyaki in a restaurant nearby before returning to the hotel which was a real delight. The hotel has a private sauna in each room and when the temperature outside minus crazy, and it’s wet and snowy, with a biting wind which seems to cut you to your very core there’s something incredibly decadent (not to mention warm, ooooh so warm) about going inside and jumping into your own welcoming, steamy sauna cabin, then robing up and whiling away the rest of the evening sitting down with a nice cup of coffee or tea. Our room was overlooking a quiet little alley and the only noise was the occasional thud of ice and snow falling off the roof, past our windows. 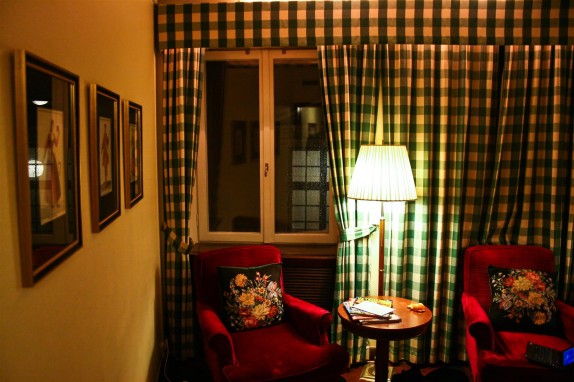 On one of the days we headed up the hill on the island of Södermalm to the south to have a look about, and also to go in search of an incredible vegetarian restaurant. Wonderful, wonderful food, and not a chicken wing or steak in sight! The only problem? Instant coffee at the end of the meal. Ick, but aside from that, most excellent and very cheap (they aim for the student crowd I think, at least at lunchtime). Even if you’re a die-hard carnivore I wholeheartedly recommend this place for affordable, buffet-style meals – “Hermans” (Fjällgatan 23B, Stockholm).

There’s another beautiful, distinctive church at the top of Södermalm (Katarina kyrka) and I also managed to get a photo across the water showing Gamla Stan on the left and the island of Skeppsholmen on the right, although there was an “incident”, involving me clowning around and taking a bit of tumble on the ice on the sidewalk, narrowly avoiding smashing my camera to bits (just my behind instead – ouch!). Don’t let the almost “sun-kissed” buildings in the photo fool you – the temperature was well below zero and the wind was biting. 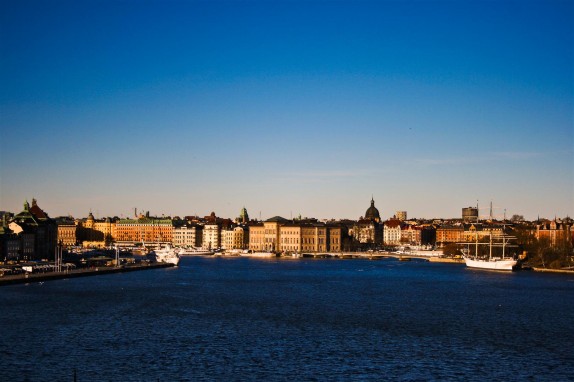 On our last full day before leaving we went a bit further afield and took a trip to Skansen – an open-air museum on the island of Djurgården (in case it wasn’t obvious by now, Stockholm isn’t actually one single self-contained area, but is spread over 14 different islands around the mainland where most of the city is based). Now, it may be a bit nuts to visit an open-air museum in the middle of winter but no visit to Stockholm is complete without seeing Skansen and I’m glad we went. I ate, quite probably, the most delicious meal I’ve ever eaten in a restaurant – no word of a lie. Braised reindeer on a bed of roasted root vegetables, atop a great pool of creamed potatoes with a cream sauce, topped off with little wedges of baked apple, grated horseradish and watercress. I also ate some of the most incredible sourdough bread I’ve ever had (that didn’t last long enough for the photo, alas! :D). 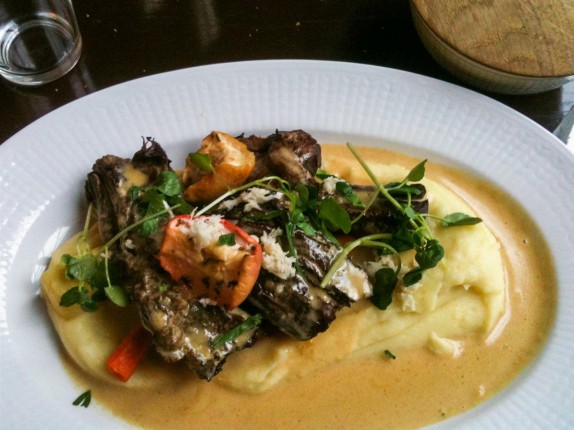 The museum is fantastic – even in the middle of winter. Many of the buildings are closed, sadly, but there are still some which were open – an old hardware store (not a real one, obviously – a full-size exhibit of one) with a recreated owner’s house behind the store for example. We went into one beautifully warm place and found a guy blowing glass which was great fun to watch (I’ve always wanted to try that actually). 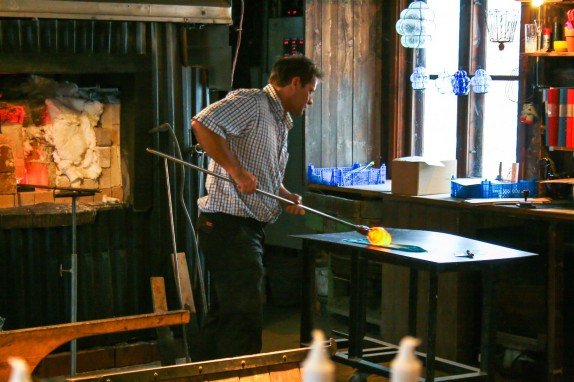 Just outside the workshop and store there was a little pathway decked out with… Christmas trees? In February? Christmas decorations were stretched across the path as well, a cart, and many crates and barrels… I have to say, I was a little perplexed. Well, I had to wait until December 2011 but I found out what was up with all that. Each year, since 1960, on Swedish television they have a Christmas series in December for Children. Each episode is about 15 minutes long and is shown every morning from the 1st to the 24th. The show is called Julkalendarn, or “Advent Calendar”. The 2011 series was called The Thieves’ Christmas (Tjuvarnas jul) and guess where one of the filming locations was? Yep – Skansen! You can see the street in the intro to the show in this video if you’re interested. 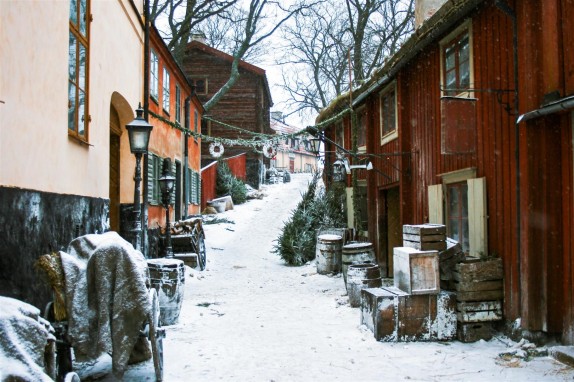 As nice as the museum was, the cold wind soon started making us yearn for a hot drink and a warm place to sit, so we managed to find a wonderfully quaint little coffee shop. Hot coffee and cake was the order of the hour! 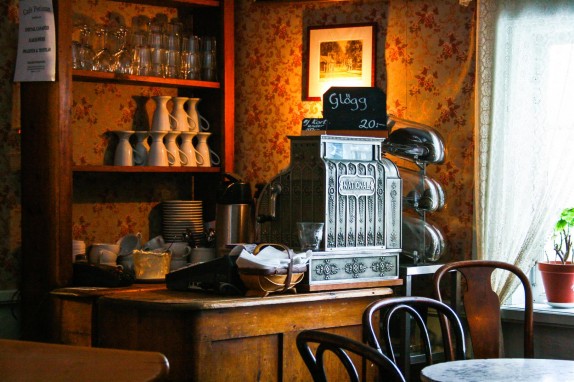 The next day, we awoke to a blanket of white. I have to admit I was rather worried. The hotel restaurant has large windows which overlook the waterfront and I was sitting there watching the snow fall (of course, this didn’t ruin my appetite, and the breakfast in this hotel was incredibly good – cheeses, cold meats, breads, cereals, bacon, eggs, different natural yoghurts, fruits, sliced vegetables), but trust me… if they had this snow “all of a sudden” in Paris it would be the end of the world. Flights would be cancelled – you’d be looking at major inconvenience… I needn’t have worried though… the Swedes know how to handle a bit of snow and no last minute changes to our plans were necessary :D. 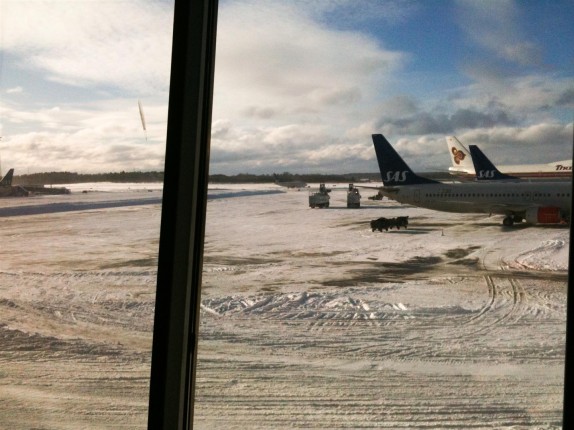 I really recommend a trip to Stockholm if you ever get the chance – especially Gamla Stan. It’s a truly beautiful city, with many interesting sights. I can’t begin to go into details here – I’ve waffled on for far too long already and I don’t want to send you all to sleep but if you’re ever “in the area” – do check it out :).

I hope you all have a fantastic weekend. Enjoy the recipe. In my next entry I’ll either be posting something Swedish-ish, or revisiting something I’ve made before but a very long time ago, back in the day when I couldn’t take a good photo to save my life, so hopefully I can make it look halfway appetising now and make a few tweaks to my original recipe. See y’all soon! 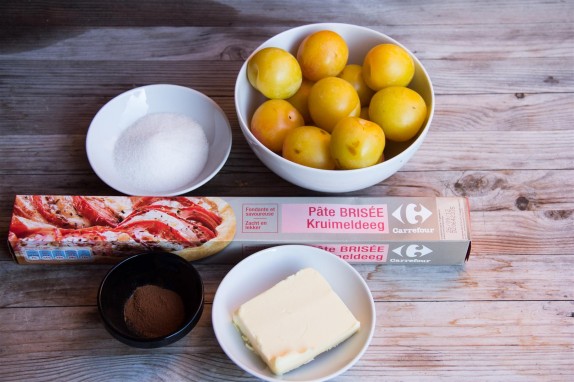