You are here: Home / Cost / Stir-fried Garlic Peas with Coriander

Before I launch into the main subject of today’s post, I thought I’d share something rather interesting with you. Hands up who’s heard of a durian? Keep your hands up if you’ve tried one. Ok, now keep your hands up if you enjoyed it? For those still with their hands proudly up… you have my admiration. When my sister was visiting me last weekend we went to Chinatown in Paris and walked past a sizeable Asian supermarket. Oh the joy – young coconuts, giant papayas, mangoes, banana leaves, a great many other things I’d never heard of… I was a bit like a kid in a candy store, running around stuffing all manner of things in my rapidly over-flowing basket. My sister had her eyes on one thing though. “You’ve got to try a durian! I’m going to buy you one!”. I’ll admit it right now… I was apprehensive to say the least (a better way of describing my emotion would be “scared”). This is the fruit which has been described by some as smelling like rotting flesh – hardly a great advert.

The edible flesh emits a distinctive odour, strong and penetrating even when the husk is intact. Some people regard the durian as fragrant; others find the aroma overpowering and offensive. The smell evokes reactions from deep appreciation to intense disgust, and has been described variously as almonds, rotten onions, turpentine and gym socks

Visually though, they’re stunning. Heavy, hard, spiky things, the size of a football they sat there, all piled up, looking very intriguing. You’ve got to choose one which has started to crack, so I’m told. That’s the sure sign of finding a ripe one, although it’s not a dead certainty. It’s not like you can give them a squeeze, like you would a peach. You’d end up needing stitches if you did! 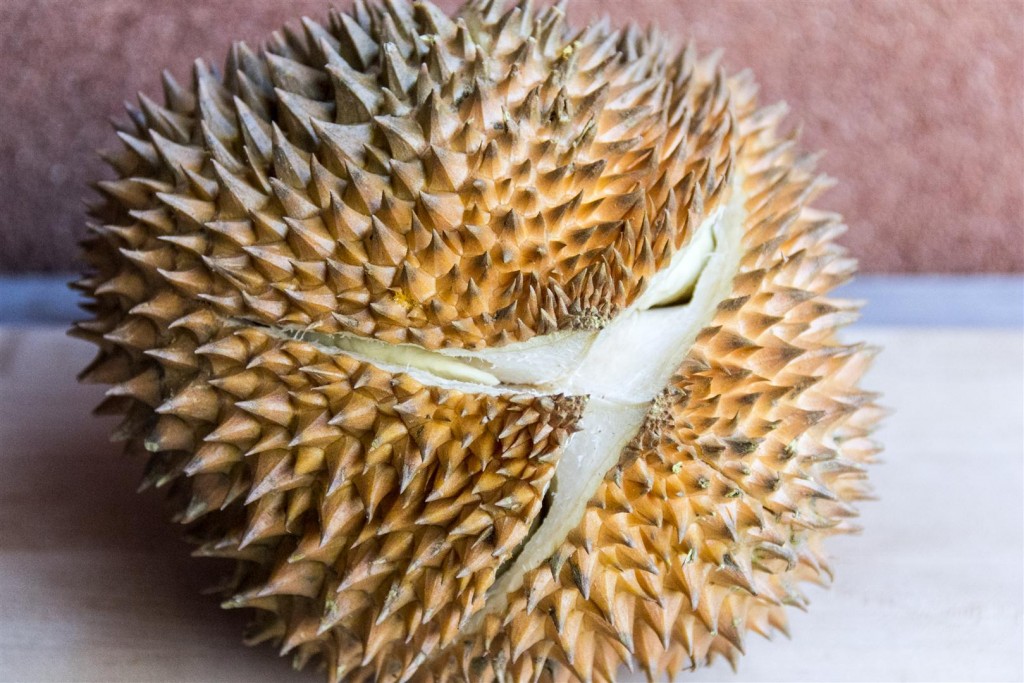 The shop assistant dutifully wrapped it up in newspaper (very thoughtful… I can well imagine how my legs would look after a short walk with that swishing around next to my knees!) and put it in a bag and off we went. I’ll admit right now… the immediate smell wasn’t anywhere near as bad as I thought it would be. It was almost pleasant while it was sitting in the car. Once home I set to work to pry it open and eventually managed to rend a section of it free to reveal the “meat” inside. I say meat, because I have to admit that it kind of looked a little like slightly under-cooked chicken, complete with a bit of juice running out… yum!

Egged on by my wife and sister, and the knowledge that apparently my niece loves the things, and she’s three years old, I knew I had to man up and taste it. I gingerly bit a small piece off and was pretty surprised. Once again – not half as bad as I’d imagined, although apparently this durian was bad quality – dry, flavourless, and a different variety to the ones which are popular in Asia apparently, so it was a bit disappointing. Apparently when properly ripe it should be sweet with the texture of an extremely ripe banana. I don’t think I’ll be joining the durian fan club anytime soon… the flavour wasn’t that good, but I’m glad I’ve tried it. I’ve got a can of dried durian here as well… real tasty stuff (so I’m told). Stay tuned and I might do a “live tasting” on video of that soon :). 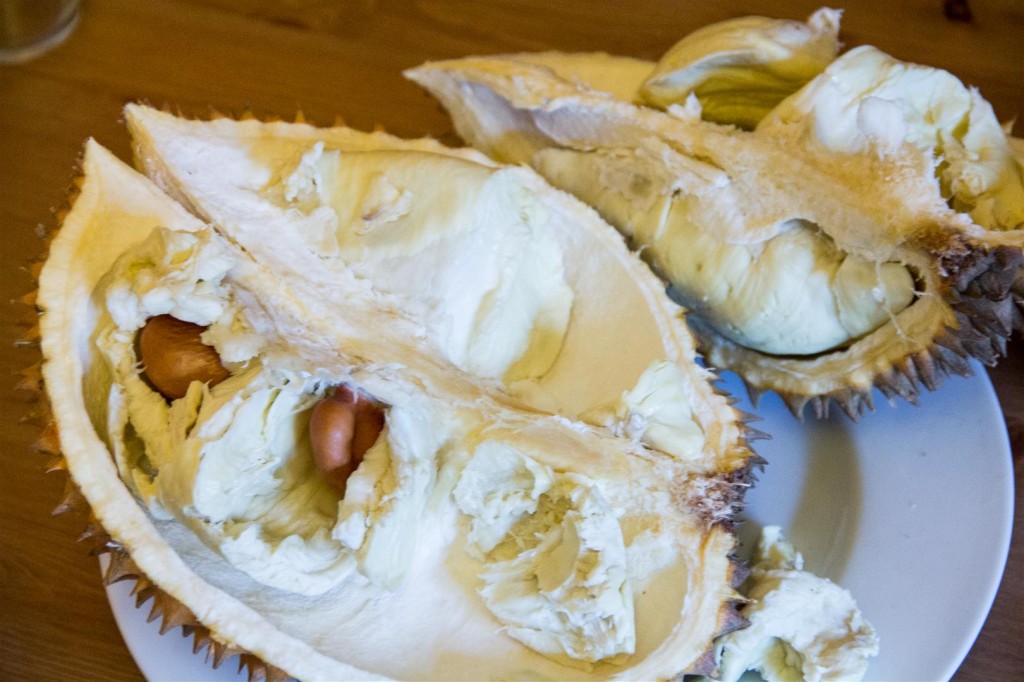 Anyway, on with today’s post, all about peas! I think you either like them or you hate them. Dreaded vegetable for kids everywhere, I can’t count the number of times I heard the phrase “eat your peas” when I was younger. Naturally, as time went by and my tastes developed and evolved I learned to love peas, but there are peas and then there are peas, and those funky things you get in cans don’t really deserve the name. As I mentioned in my last video, I went for a visit to a farm shop last weekend and got all sorts of fantastic stuff. I’ll admit, I got rather carried away when I saw the things they had. Fresh beetroot, big juicy lemons, green tomatoes, fresh garlic and the star of today’s post: some wonderful peas.

I don’t often buy peas; I’m not really sure why. They’re not my wife’s favourite food, and as a result I guess we just kind of adapt our eating habits to things which we both enjoy. Because of this lack of preparation experience with the things, my method of serving has always been the same – boiled, plain and simple. Can you name a more boring cooking method? I would imagine not.

I started shelling these little beauties and as soon as I saw them, I knew that I had to do something good with them. I couldn’t just chuck these sweet, tender little gems into a giant pot of boiling water; they deserved so much better! Incidentally standing there, podding peas and thinking about life got me thinking. Isn’t nature amazing? Just look at those pea pods… the perfection with which they open like that, all stacked up! Thousands, no, probably millions of years worth of evolution in plant-life, all coming together to deliver these little pockets of wonder to me. 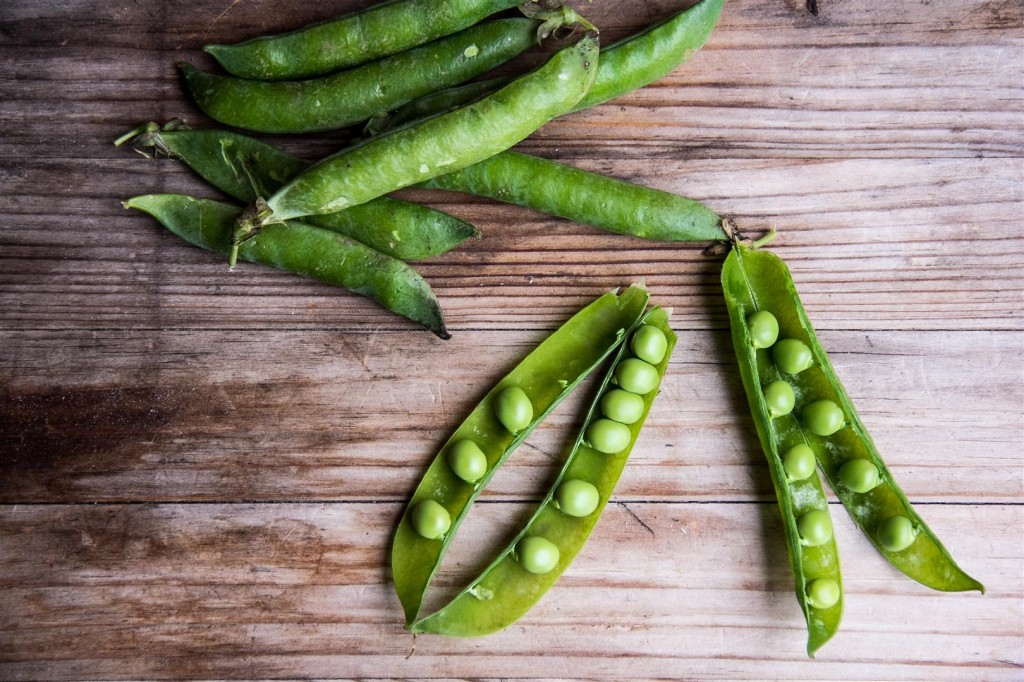 If I can give you one message from today’s post, it’s “eat more peas”. It’s the food of many pleasures. First you have the joy of shelling them (maybe this isn’t a joy to everyone, but I love it personally), next you have the joy of eating the peas and finally, don’t throw away the shells because you can use those for a nice stock. The dish is quick to make and makes a wonderful accompaniment or even a snack on its own!

I hope you’ve all had a wonderful week – not too stressful, not too busy. I’m looking forward to whipping up a few more things in the kitchen this weekend and stay tuned for my next video and recipe for the lemons I got from the farm shop, coming up next Tuesday.