You are here: Home / Adventures / Swedish Countryside – My neighbourhood

Hi folks, I’ve had a few people asking about what it’s like where I live so I thought what better time to share a few photos. I braved the -25 Celsius temperatures today to take a walk around and get some shots. We’re finally getting something worthy of being called a winter here – a bit of snow, some low minus temperatures, and all the fun that comes with such weather conditions.

No recipe today alas – I’ve been quite tired from my studies so just didn’t have the motivation to start whipping things up in the kitchen, but I hope you enjoy the photos of the Swedish countryside, and if you happen to like any of the photos you can buy prints, canvasses, mouse pads or even paper-weights in my online store here. My store also contains all of the photos I previously shared from my road-trip to Sweden and I’ll be adding more to it over time.

It was actually lovely to be outside. It was cold, sure, but the important thing is to wear proper clothing. Thick socks, good shoes, a good coat, a hat (especially important when you have a shaved head!) gloves and, I’m perhaps a little embarrassed to say, long johns. It might not be “hip”, but to hell with being cool… I’d rather be warm. 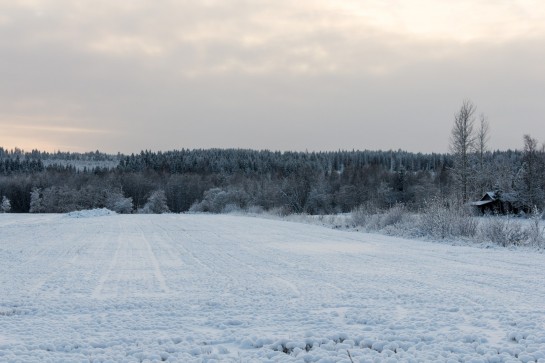 In the end, the only part of my body which actually felt cold at any time was my cheeks, but I was lucky – there was no wind at all. On such a cold day, wind would lower the temperature even more and no doubt make you feel quite miserable. In case anyone is wondering what the lowest operating temperature of a Canon 60D is (the model I have), I can confirm that it works fine in such chilly conditions, although the auto-focus motor in the lens was sounding a bit laboured the longer I was out (though still working fine). 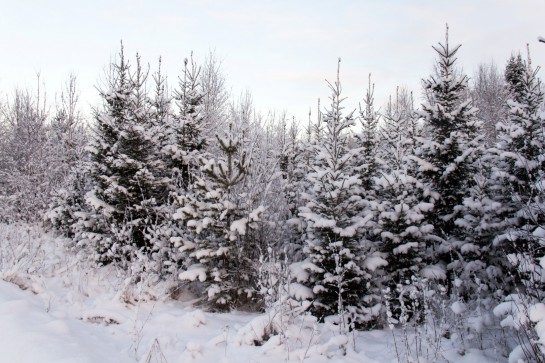 I’m lucky to be living in a place that is close to “civilisation” but I can literally go outside the house, walk for five minutes down the road, turn up a little lane and feel like I’m in the middle of the Swedish countryside. OK, perhaps it’s not as remote as many places but it’s surrounded by forest and fields and nature and that’s good enough for me. 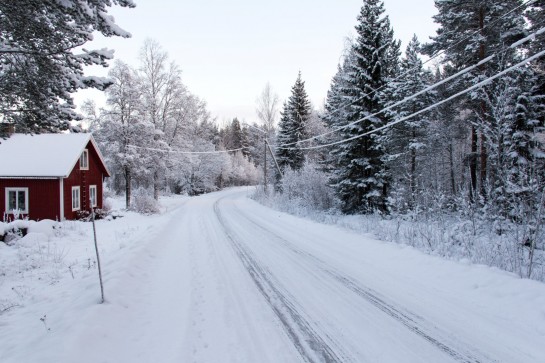 If you stray away from the main highway onto smaller country roads you’ll find that they’ll usually look like this in the winter. A thick layer of packed ice covering the carriageway doesn’t make for awesome driving conditions and for that reason snow tyres are a legal requirement. You’ll also come across a great many houses such as the one in the corner of the picture here. Eva from KitchenInspirations was wondering what most houses were made from – wood is the answer. I don’t actually know where the nearest house made from brick or stone is around here (although there are many offices and hotels in the nearby city built in stone). You do see brick houses occasionally, but timber is the most common material in construction – even for supermarkets and churches.

Notice as well the stick at the side of the road in the foreground above. That’s so you know where the edge of the road is when there’s lots of snow, and don’t end up driving into the ditch (all the roads also have a deep ditch on either side for the snow to go into when it’s ploughed). 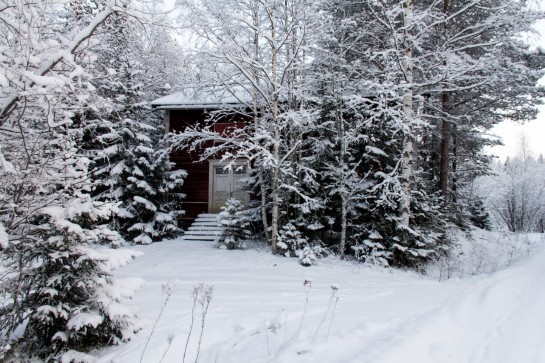 There are a few empty houses near where I live. This one has been uninhabited for 20 years or more and all the windows are boarded up. It’s hard to see from this angle, but it’s a handsome little house in a beautiful location. It seems so sad to just let nature take it over. 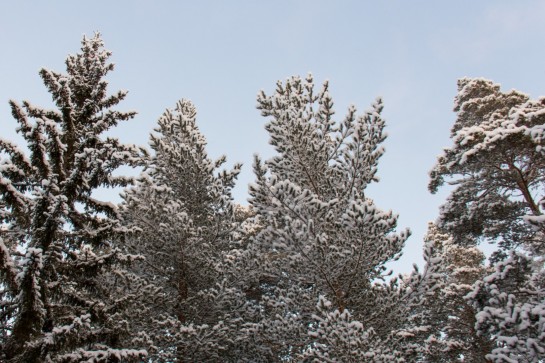 The sky was actually a lovely pale blue colour when I went out. Later, it became cloudy and started snowing a little again, so it was lovely to have a bit of clear sky and sun and see the trees covered in snow when I looked up, without getting a load of snowflakes straight into my eye! 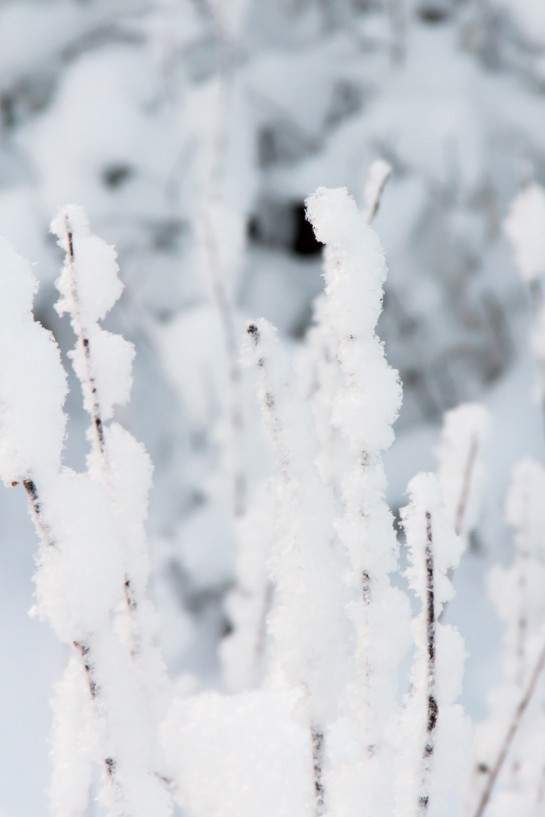 It was the same with the dead grasses and bushes by the sides of the road. The snow was of such a type that, despite being very light, it wasn’t too powdery so it clung to everything it touched. 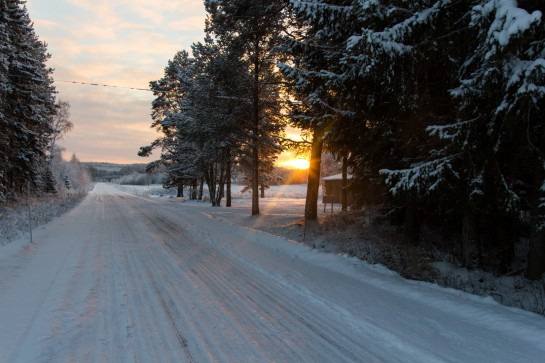 On the way back I passed by some trees and as soon as I’d cleared the last one I was greeted by a beautiful, low, orange sun. Not really warming, but definitely a nice sight. 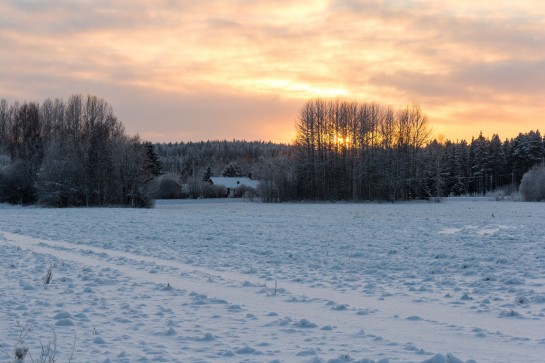 Such is life though, and literally five minutes later the sun had all but disappeared down below the horizon, with just the top peeking out still. Further on down the road I saw someone taking their horse out for a ride. Notice the reflective vest she’s wearing – very important when you’re out taking a walk in the winter here. If the weather becomes bad then people in cars may have real problems seeing you by the side of the road so these help a lot. Even the horse had little reflective bands around its front hooves! 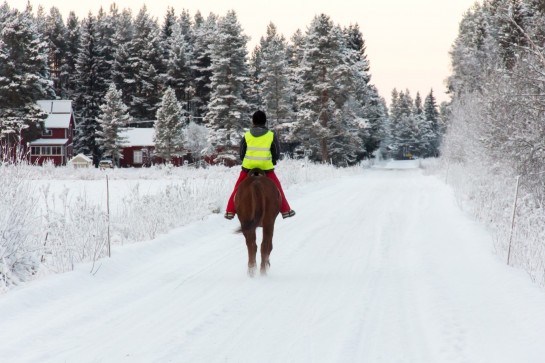 Back at home I was eager to step back inside for a cup of coffee to warm myself up but I thought you’d like to see a picture of the snow flakes I spoke about earlier, so I stopped to take this photo. It makes for very strange snow – really light and fluffy, and if you try to gather a big clump together it’s like squeezing a ball of plastic wrap – really pliable and elastic. 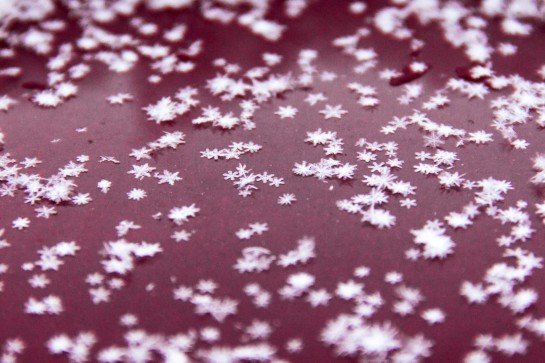 I hope you’ve enjoyed these few photos of a small part of the Swedish countryside. I’ll be back soon with a giveaway, so do tune in for that! In the meantime though, take care, and stay warm. I know I will!