Greetings folks. I hope this monday finds you all well. I’m a day later than usual but my goodness – life seems busy right now. Things to do, places to go, people to meet! Add to this the clear blue skies and delightfully hot weather and, alas, sometimes cooking and blogging has to take a bit of a back burner. We had some friends over yesterday and I served up a boeuf bourguignon (yeah, I know… not really “summer” food), and then this for dessert. Heavy much? Maybe just a little, but at least this was cold!

This might just be one of the most unhealthy things I have made in a long time. Yep – it’s up there with the 10,000 calorie tray of Millionaire’s Shortbread. Nah, ok – that’s worse, but this is still pretty bad. Imagine chocolate truffles, all smooshed out, cut into slices, on a biscuit base. Got a picture of that in your mind? Ok, well that’s what this is. Except it’s not just one type of “truffle”, it’s three, and they’re all layered up. Just because everyone could do with having a bit more sugar and cream in their diet, I’m sure, right? I didn’t bother flavouring the layers with anything. If you fancy it, slosh in a bit of rum, whisky, brandy and so forth. I was hoping as well to add some finely chopped red chilli to the dark chocolate layer too, but couldn’t find any at all in the end – oh well 🙁 – perhaps next time.

I’m a bit bummed because I hadn’t really cooked with white chocolate before and it didn’t really have the same qualities as plain and milk chocolate. That’s why it’s oozing out of the sides in the photos of the tart. Unfortunately it didn’t set as firmly as the others. I have corrected this in the recipe though. It’s just a case of adding less cream and butter and it will be fine. Also, yeah, I know – two posts in a row where the cost is over €5… I’m sorry, but I’m on vacation… I want to kick back a bit. I promise I’ll be back  to “Five Euro Food” soon, but you know, considering this makes ~10-12 slices, the cost isn’t half bad. You could actually make this quite a bit cheaper by not using Oreo cookies and using something like Digestive biscuits instead. Additionally, you can cut the cost a lot as well by using non-brand-name chocolate, but make sure the chocolate tastes good… sometimes it’s cheap for a reason! 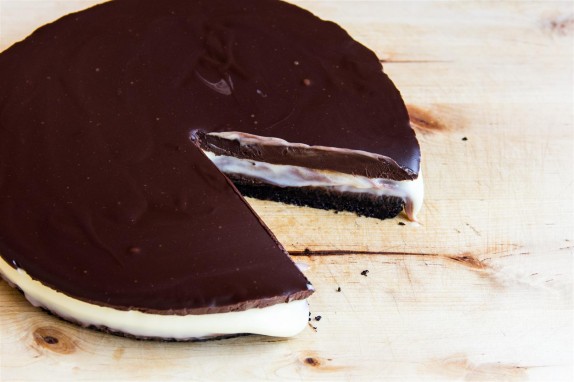 You’ll see in one of the photos as well that I could even find some blackcurrants. I almost fell over when I saw these in the stores. It’s such a surprise to see them so I immediately bought a couple of boxes and served them fresh with the torte. Trust me, even if you’re the world’s biggest chocolate fiend, you’re going to need something like this as an accompaniment. The torte is rich, rich, rich and you need something sharp to cut through and break up the flavour. Blackcurrants, or even redcurrants are a perfect pairing for this, or alternatively some passionfruit, squeezed around the plate would also be excellent.

Enjoy the recipe everyone – I’m a bit behind with my video making and so I’ll be putting that up later today. I hope you have a fantastic monday. For those of you at work, try not to think of me enjoying a bit of vacation and lazing in the sun on my balcony! I’ll be back around Thursday or so for a book review. I can’t believe it was a month since my last one –  time sure does fly! 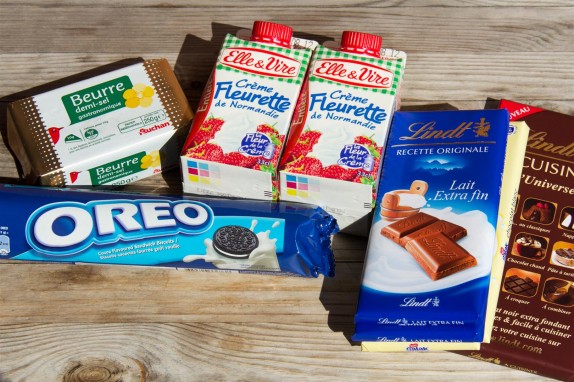 For the milk chocolate layer

For the white chocolate layer

For the plain chocolate layer